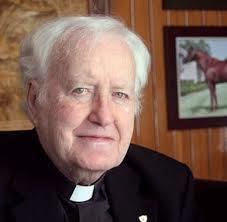 PJ was born on 6 June 1928 in Raphoe, Co Donegal. His mother was Sarah Boyle and his father was Patrick McGlinchey, one of two veterinarians in Co Donegal.

The fifth born in a family of six boys and four girls. He attended St Eunan’s College in the cathedral city of Letterkenny and later went to Dalgan where he was ordained on 21 December 1951.

PJ often said that his time in Dalgan were the happiest days of his life.

He was appointed to Korea and arrived in Pusan on 11 April 1953 with his classmates while the Korean War was still being fought further North.

After about seven months of language study he was appointed assistant to the parish of Suncheon in the Jeolla Province where he worked for about 5 months.

From there he was appointed to start a parish in Hallim which would become the third parish in Jeju. He arrived by boat to the island on 17 April 1954.

To promote evangelisation, PJ hired seven full-time catechists and sent them to various villages in the area.

Over the years, six parishes have been established in the villages to which these catechists were sent to preach the gospel.

In Hallim he organised the first Legion of Mary meeting to be held in Jeju. The handbook was not available in Korean at that time so PJ translated it as best he could during the meeting.

As he did not report this meeting to HQ, it was not recorded so till this day Jung Ang parish in Jeju city gets the credit for the first Legion meeting in Jeju.

After the war free corn was available to feed the people. PJ, fearing that people might become Catholics just to get food, gave all the catechumens a rigorous test before approving them for baptism.

He was also very careful not to discriminate on the basis of religion in distributing free food.

He felt very strongly that giving food to the starving should only be the first step in aid. In order not to make the people dependent on handouts he felt it necessary to facilitate people helping themselves to become financially independent.

He believed that if he was going to preach a loving God he had to show that love in concrete ways and so he started a process of reading the “signs of the times” and responding.

He often quoted Matthew 25 “Whatever you do to the least … you do to me“. The various projects he set up were not seen as an alternative to or an optional part of evangelisation but rather as an integral part of what he was called to do as a missionary in Korea.

Among the works he started in response to the situation at the time were: setting up the 4H club; a knitting and weaving industry with the help of the Columban Sisters; helping set up small independent farms across the island; the pig industry and a cooperative; a feedmill; a training farm; a milk and cheese factory (later transferred to the dairy cooperative).

He set up the first credit union on the island and also established an organic dairy farm and developed a stud farm to train horses.

He invited the Poor Clare sisters from the US to establish their first Korean foundation in Jeju.

He set up an old folks home (later to become a nursing home); a clinic with the Columban Sisters (later to develop into a hospice for the dying); a kindergarten and youth education centre; a retreat house and pilgrimage site (known as the ‘Hill of Grace’) containing life sized statues showing scenes from the life of Christ; the stations of the cross and more recently resurrection scenes.

Various religious congregations were invited to work and minister in these initiatives. All these educational and social welfare projects were promoted under the auspices of the Isidore Development Association and supported by income from the farm and the feedmill.

PJ received many accolades and prizes over the years and his comment always was “I did nothing to deserve this; it is God’s work helped by all the people around.”

Among the ways he was referred to in Jeju included; a pioneer of Social projects in Jeju; a promoter of cooperatives; a present given by Heaven to Jeju; a blue eyed hero; a star of the modernisation of Jeju; a priest who repeated the miracle of the loaves and the fishes.