Home Resources The Synodal Path A Synod that made a Difference

A Synod that made a Difference

Columban missionary Fr Kevin O’Boyle worked for many years in Santiago, Chile. He spoke to Fr Alo Connaughton about a synod that radically changed and reinvigorated the Church there.

Q: There is a lot to talk in Church circles these days about a synod. Many years ago, you participated in an interesting one.
A: Yes, in Santiago in Chile in the 1960s. In the 1950s, visitors to Chile went away with the belief that the Catholic Church there was dying fast. Few people participated in any of its activities, and it was divorced from the lives of most people, especially the tens of thousands of newly arrived rural migrants. Many of these, however, did have a strong brand of popular religiosity with its beliefs and practices. The Chilean Church also had a group of new bishops with vision. They were, at the time, participating in the Second Vatican Council.

Q: So they decided to organise a Synod?
A: I’m not sure if Archbishop Raúl Silva of Santiago and his team had a synod in mind at the beginning, but they started a process that ended in the pastoral Synod of Santiago. The early steps of the process were what made the final one and its positive outcome, possible.

Q: What was the first step?
A: This was the General Mission of 1963/64. The objective was to give ordinary people a basic, updated, education in the faith and an experience of community. I remember how the advertising poster struck a chord. In a Church where people had heard a lot about the severity of God, the poster depicted a man looking over a wall enquiring, ‘Do you know God loves you?’ The mission itself was not the traditional mission with preachers coming for a week or two. The preachers would be local, committed people.

First of all, scores of potential group leaders, lay and religious were invited to take part in training sessions organised by the archdiocese. Many leaders were required since the mission was going to take place in private houses and backyards. When the leaders were ready, volunteers went to the highways and byways inviting people to take part in the mission. The invitation was to go, not to the church, but to a meeting in the house of one of the neighbours starting on a certain evening. Numbers were kept to a manageable size. Typical Columban city parishes organised fifteen or more such groups.

Q: What was the format of the meeting?
A: The mission lasted for two weeks. The session usually began at a time when everyone was home from work. Booklets with prayers and songs/hymns were printed. The opening part of the session was a half-hour talk on the core elements of the Christian faith given by a speaker who was attractive and convincing. A number of local radio stations had agreed to broadcast this talk. After the talk the group leader would invite those attending to share their reactions and reflections. The session would end with some prayer and an appropriate hymn/song. Chileans like to sing.

Q: What do you most remember from those sessions?
A: First of all, I was struck by the extraordinary, and often unexpected, enthusiasm of the people. Many of what might be considered unlikely candidates were happy to be invited and came.

Q: Did the mission produce long term results?
A: It was an unbelievable experience to see what was buried in the ashes come alive. People had a new awareness that they were people with a voice, not just silent spectators. They had a new experience of what the Church was, not just a distant institution but a community where they too had an important place and role. In the years that followed, in spite of the permanent shortage of priests and sisters, many Christian communities continued to thrive because of the promotion of the leadership abilities of the ordinary people.

Q: There’s always a danger that something like this will soon run out of steam?
A: It didn’t because of the solid enthusiasm of so many of the people. Many people got involved as volunteer lay catechists, basic Christian community groups, charismatic renewal etc. Also those ‘at the top’ gave great encouragement and believed in the need for profound change. With their words and actions they accompanied what was evolving.

Q: Apart from what we have mentioned, were there other factors that helped?
A: The process was helped by political changes taking place in Chile at that time; popular participation was being encouraged. This was the time when Latin in the liturgy was being replaced by the Spanish vernacular. The archdiocesan department of catechesis began producing wonderful publications. It was a time of great creativity in music, not only pious new hymns but some with words like those of the psalms that touched on reality. Archbishop Raúl Silva, a man who had played an important role at the Vatican Council, decided, with his team, that the priests and religious of the diocese were in need of serious updating. All priests were told to ‘down tools’ and take part in an intensive nine to five six-week course of theological and pastoral renewal at a large city centre location.

Q: So where does the synod come in?
A: I have talked mostly about what happened ‘before’ because this gave a renewed education in the faith. The synod came a year or so after the mission and met periodically for two years. As far as I remember, of the 400 delegates, 360 were lay people elected by the parishes and Christian communities.

Q: Did that synod make a difference?
A: Even today people would remember it as an event that reinvigorated the Church in Santiago. A vital part was the honest diagnosis of the real ‘sickness.’ People admitted that unless change happened, the Church was dying. Celebrations of the Mass were often cold and unattended. Sacraments were being ‘administered’ without context or preparation. A pastoral plan emerged which gave guidelines for future action.

For example, the age for celebrating First Communion and Confirmation was raised. Sacramental preparation would now take place in parishes, led by lay people and with the participation of parents in regular Christian formation meetings. This continues today.

Q: What stays with you today as you remember the mission and the synod?
A: It wasn’t just a time of business-type meetings but one of prayer and discernment; a listening to the Holy Spirit. The attempt to read ‘the signs of the times’ was vital. The detailed Pastoral Plan with guidelines for things such as sacramental preparation, basic community development, justice and peace work etc became a handbook for years to come. At synod meetings the voice of the lay people was heard, and their votes were counted. They could say, ‘This is what we decided.’

Fr Alo Connaughton is a formereditor of the Far East magazine. He worked as a missionary in Chile from 1974 until 1993 and in Myanmar from 2004 until 2007. He is now based in Thailand where he teaches at Saengtham College, Bangkok.

This article was first published in the July/August 2022 edition of the Far East magazine. Please subscribe and support our mission work with the most disadvantaged. Subscribe here: https://columbans.ie/product/far-east-magazine-yearly-subscription 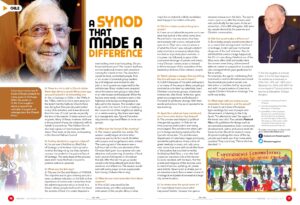