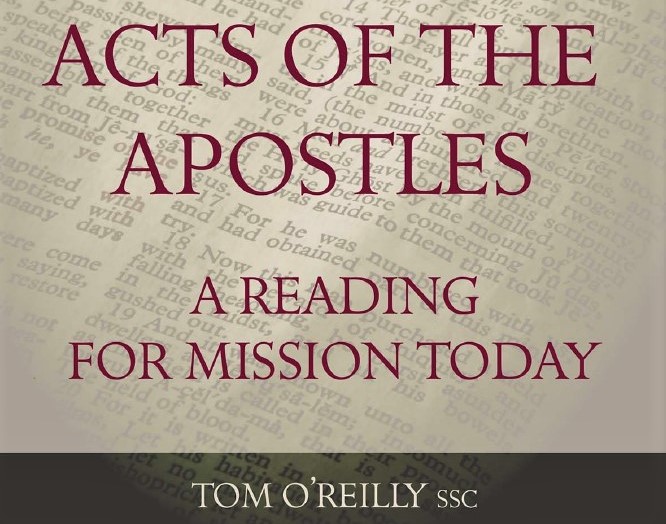 Columban Fr Tom O’Reilly’s new book on the Acts of the Apostles has been hailed by both the Papal Nuncio to Ireland, Archbishop Jude Okolo, and by Archbishop Kieran O’Reilly, who described it as “a very key book for missionary groups”.

On Wednesday 21 April, over 80 people participated in the online launch of the book,  published by Veritas and titled ‘Acts of the Apostles: A Reading for Mission Today’.

In his address, Archbishop O’Reilly told the launch he believed the publication was “a very valuable contribution” to the Irish Church’s synodal process which was getting underway.

“I would like to see the book far beyond Irish shores, perhaps there will be opportunities for it to be available in seminaries and places of study and formation for missionary sisters, priests and brothers.”

The Archbishop, who chairs the Bishops’ Council for Mission, said it was appropriate that Fr Tom’s book was being launched now as currently the First Readings in the Liturgy of the Word are drawn from the Acts of the Apostles.

“We have a very good companion to those texts in Tom’s book. I have been using it myself as we read each day the different exciting events that took place in those early years of the Church.”

Noting that Fr Tom wrote the book during lockdown in 2020, Dr O’Reilly commented, “It’s good to see that there are already fruits coming out of the Covid lockdown.”

He said it would be of benefit to those in bible study groups or in a Lectio Divina group, or those who want a deeper reflection on the text.

He also praised Fr Tom’s exploration in the book of what mission is and the significance of mission for all the baptised as missionary disciples and spirit-filled evangelizers as well as the book’s reflections and insightful footnotes.

The synodal path that the Church in Ireland is undertaking, he said, has to be “rooted in reflection within the scriptures. Otherwise, we will be wandering all over the place and tossed and turned. I think if we have a solid scriptural basis for that journey, we will achieve with the Spirit what the Spirit is asking of us to do.” 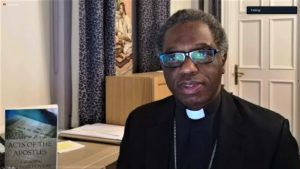 The Papal Nuncio, Archbishop Jude Okolo was unable to attend the launch and sent a recorded message to Fr Tom. He said he had “perused” the book for “spiritual enrichment”.

“I appreciate how he colourfully portrays how life was in the early Church. The publication shows how the disciples understood the message of Christ and how they lived it in those early times, as narrated in the Acts of the Apostles.”

The Nuncio expressed his appreciation for Fr Tom’s “scholarly input and missionary outlook”.

“Personally, it spurs me to take up the Acts of the Apostles once again, in order to understand the life and testimony of the first disciples,” he said.

Archbishop Okolo also noted, “It is interesting to note that the early church began with a lockdown in the Cenacle. It was a necessary lockdown imposed by Christ himself, in order to receive the Holy Spirit. The book helps me to see the present distressing and boring lockdown of the Covid pandemic in a positive light.” 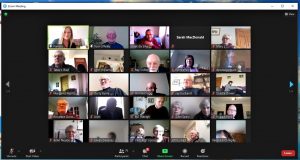 He said he wrote the book because he had an interest in the Acts of the Apostles from his time teaching at Kimmage Mission Institute. “I saw it as the most missionary book in that part of the Bible.”

As the second book written by St Luke, Fr Tom said he believed the Evangelist wrote it to encourage gentile Christian communities who were going through a time of change, transition and crisis, more than 50 years after the death and resurrection of Jesus. They were still trying to figure out who they were and where they’re fitted into a community that was predominantly Jewish.”

“The mission started to get hard. They were meeting opposition; it wasn’t as easy as they thought it would be. And they were having very little success. So, they were losing their missionary nerve. They were asking questions about God: ‘Is God really with us or not as we face difficult times; as we face an uncertain future, will God be there for us?’”

“We’re living in a world that’s often divided and in conflict, on the basis of difference – cultural difference, racial difference – we’ve seen that on the television today when you hear what’s happening in Minneapolis.”

“I think community and mission go hand in hand.”

Elsewhere, Fr Tom said, “I think Luke puts tremendous emphasis on the need for a listening church, a discerning Church when it is facing new situations, new questions, new challenges because Luke is convinced that the Spirit is all the time guiding and leading the Church, and the Church always has to ask: ‘Where is the Spirit leading us at any particular time?’ And it’s not enough always to give the old answers to the new questions in changing situations.” 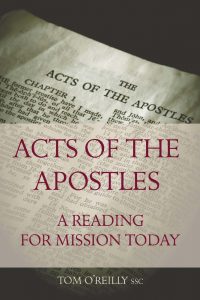 Linking his book with the synod planned for the Irish Church he said, “Hopefully, the synod and the preparation for it will not be just occasions when we defend positions or when we argue the toss or start to push agendas. I hope that it will be an occasion when we listen a lot, listen to one another’s experience and respectfully reflect on that experience in the light of the world because I think it’s only then that we start to get a sense of where the Spirit is leading us.”

“A synod means journeying together. So it’s about being on the road together, asking the questions together, searching together and knowing all the time that we have the compass of the Holy Spirit to guide us.”

Underlining that the book is not for the specialists or for priests or religious he said, the Church has a missionary heart and again.

He praised Pope Francis for this emphasis in ‘The Joy of the Gospel’ (2013) that everyone is a missionary disciple of Jesus. “Every baptized Christian is a missionary disciple of Jesus. We’re all called to be spirits-filled evangelizers, bearing witness to Jesus, particularly by the way we live. The missionary vocation is rooted in baptism not in ordination and not religious profession and we all have a role to play, and we are all given a specific job in the mission of the Church.”

Acts of the Apostles: A Reading For Mission Today by Fr Tom O’Reilly is available from Veritas here