Home Features A Stranger and You Welcomed Me 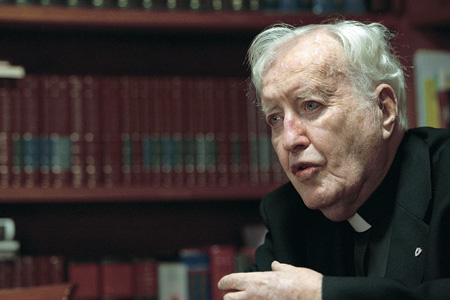 The recent death of PJ McGlinchey brought back a memory of a chance meeting I had with him late one night in the Columban house in Seoul, Korea. I spied him sitting in the community room, obviously in a pensive mood and on greeting him, he said, “Could you give me two reasons as to why I could import animal fee donated by the American government?”

South Korea was at this time under military dictatorship and PJ was in the process of establishing a community development scheme that would benefit the local people of Jeju. Much of the population in the early fifties were refugees from war.

PJ had been called in by the Internal Ministry to explain his programme. Most of the population of Jeju island was engaged in fishing and some cottage industries. However, there was a mountain range overlooking the island which PJ thought was not unlike the rolling hills of Donegal and the possibility of it being developed for grazing haunted him.

A few days later, I met PJ again who told me that the meeting went well despite some conditions he had to observe. Being idealistic and courageous he decided to pursue his vision for a large-scaled development programme initially founded on the credit union system. This was to become the Isidore Co-operative and over the years its effects were far reaching, not only locally but throughout South Korea.

Over the next sixty years, PJ directed the operations with great tolerance and forbearance. In the intervening years, it extended not only to co-operative farming of cattle and pigs but also included a woollen industry, a retreat centre and different evangelisation initiatives including a community of contemplative sisters.

Over the years, a numbers of lay volunteers accompanied him including a vet from Co Kildare, Michael Riordan, who subsequently became a Columban priest and continues to manage the project in Korea today.

Bishop Daniel Tji of Wanju diocese with whom I lived, once had a chance meeting with PJ on a train and naturally the topic revolved around the Jeju project. The bishop invited him to address priests and religious of the diocese and his sharing of his vision for the future had a huge impact on them.

PJ’s spirit enabled him to overcome the many challenges he encountered along the way; foremost was his ability to convince people on the ground to realise and acknowledge the potential that lay on their doorsteps.

His vision was greater; the establishment of a credit union totally transformed Jeju’s rural development. It is now in the hands of a once-doubting community.

His legacy goes beyond the human aspects of life because it incorporated a new form of evangelisation in a non-Christian environment. This legacy is enshrined in awards he received from both civil and church organisation.

His funeral was attended by several bishops, hundreds of priests and religious. It was also noted that the President of South Korea regretted his absence due to historic meetings with his counterpart in North Korea.

PJ would have said, “It wasn’t all my doing – the good Lord was the inspiration.”