Home About Us Meet the Columbans Meet a Columban Sister 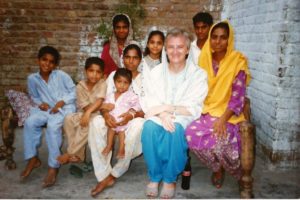 Sr Rebecca Conlon is a member of the incoming leadership team of the Columban Sisters. She was one of the first group to go to Pakistan in 1990. She talks about missionary life and working with the Christian community in Pakistan.

“I arrived in Maghermore, the Columban Sisters’ base in Ireland, in 1967. After boarding school in Claremorris in Co Mayo, I worked in the civil service at the Department of Education in Dublin for three years.” While there, Rebecca Conlon discovered that two other girls in the civil service were also entering the Columban Sisters at the same time. One was working at the Department of Defence and the other was with Revenue. “So the three of us gave up our pensionable jobs to come to Magheramore. It was a risk.”

Originally from Milltown Malbay in Co Clare, Sr Rebecca, who turned 70 this year, has one brother. The family owned a pub but her father also worked as an insurance inspector with Irish Life. Her grandmother, who lived with the family, was a spiritual influence and set a good example to her grandchildren by attending Mass every morning.

After profession, Sr Rebecca trained as an occupational therapist in London before she was sent on mission to Korea where she worked with the St John of God Brothers in Gwangju at their psychiatric day clinic from 1977 until 1979. When her mother died that year, she returned home to Ireland to look after her grieving father. 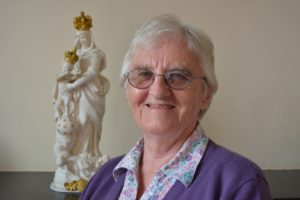 In the early 1980s, she went to the Philippines to do a course at the East Asian Pastoral Institute in Manila. Back in Ireland, she took a course in formation and became novice mistress for six years until 1990. When her term was up, she was asked to go to Pakistan, which came as a complete shock to her. Though it was not the mission assignment she had expected or hoped for, “It turned out to be the best thing of my life!”

Five Columban Sisters, four Irish and one Filipina, spent their first year in Lahore and in Murree in the north of the country learning Urdu, the national language of Pakistan. “It is difficult; you go from right to left and a book starts at the back instead of the front.”

While they were attending language school, they got to see parts of northern Pakistan which they couldn’t visit today on account of the security situation. “The Taliban are up there and so there is no way we could go back now. Back then, we travelled right up to the Himalayas and to the Chinese border. We saw K2 in the distance. One time, we were coming back by plane, and we flew over the roof of the world – it was fantastic.”

But the Gulf War was starting and it changed the atmosphere. “Sometimes we couldn’t go outside the house as there were demonstrations and so our Muslim teachers used to come and stand at our gate so that nobody would ever break in. It was real solidarity.”

When their language studies were finished, the Sisters headed down south to Sindh province, “because Sindh was the place most in need. The desert is there and the tribal peoples are there.”

In Hyderabad, the Columban Sisters chose to live among the Muslims. “We bought a house in 1993 and we’ve been there ever since. Muslims are our neighbours on all sides. People told us we were crazy because it is so dangerous, but we said that as dialogue is a way of life and a way of being, there is no point in being inside in a church compound – we are doing dialogue. Our neighbours respect us and we respect them and at Christmas or the end of Ramadan and other festivals we exchange gifts.”

Over the years, Sr Rebecca has been involved in a number of projects in Pakistan. One of these involved visiting women detained in a psychiatric hospital, which was difficult as their circumstances were not good. For almost 12 years, she worked with women incarcerated in the city’s jail. “I ran income-generating projects with them.” Some of the women were in jail for serious crimes like murder, others had been jailed over what were termed ‘adultery cases’ – where a couple defied the culture of arranged marriages and ran away with their loved one to marry.

The project paid women to make cloth bags as part of the campaign to do away with plastic bags. The income generated provided the women with money for toiletries and other essentials. But four years ago Sr Rebecca had to leave the jail because the population of the male prison was changing and it was increasingly filling up with hardened criminals and members of the Taliban. The security made it more difficult to access the jail. “It was high security and high risk. I didn’t want to bring trouble on the women by my being there and I would have had to have someone with me, so I just thought it was better to stop.” 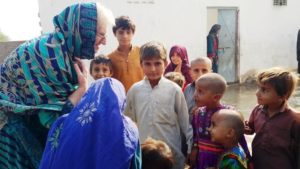 She has, for eight years, been building up another project which is focused on educating children. “Trócaire and Misean Cara have been helping me with a tuition centre for Christian children. All their learning was rote learning and I felt something had to be done.” Sr Rebecca’s educational project now has 55 children from kindergarten up to class 10, which would be equivalent to the Leaving Cert. “Part of the problem is that education is not seen as a value in its own right.” But this supplementary education is seeing dividends. Some students have already obtained A grades in their matric state exams. “It is wonderful,” Sr Rebecca comments. She is also involved in the Family Life Commission in the diocese which provides marriage preparation workshops for couples.

Asked what keeps her going and continually inspires her, she recalls how Fr John Blowick, co-founder of the Columbans, used to say ‘Full steam ahead!’ “I really think it’s inspiring.” Looking back over her 25 years in Pakistan, she is particularly proud of the Columban Sisters’ involvement in providing 40 houses for families after the 2010/11 floods. They also built houses for some of those affected by the big earthquake in 2005 in Muzaffarabad. “We couldn’t have done it without the help of our benefactors and our co-workers. You think, ‘How did we do it? But we’re not in charge of this, it is God who is in charge and He is enjoying being with us. Mission is what keeps us alive.”