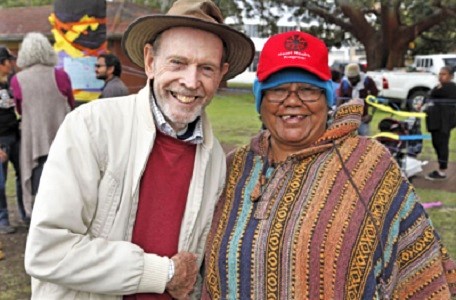 Columban missionary, Fr Peter Toohey, is based in Australia. He has been a chaplain in West Australian prisons over the past 23 years and has come to know many Aboriginal people, especially the Wongi, Noongar and Yamatji people, who have welcomed him into their country and their homes.

October’s Special Synod in Rome will transcend the strictly ecclesial-Amazonian sphere, focusing partly on the universal Church, as well as on the future of the entire planet.

In May 2017, over 2,000 Aboriginal people met in Central Australia to hammer out an extraordinary document. They called it the ULURU STATEMENT FROM THE HEART.

It said: “Our Aboriginal and Torres Strait Islander tribes were the first sovereign Nations of the Australian continent and its adjacent islands, and possessed our own laws and customs….. This sovereignty is a spiritual notion: the ancestral tie between the land, or ‘mother nature’, and the Aboriginal and Torres Strait Islander peoples who were born therefrom, remain attached thereto, and must one day return thither to be united with our ancestors.

This link is the basis of the ownership of the soil, or better, of sovereignty. It has never been ceded or extinguished, and coexists with the sovereignty of the Crown. With substantive constitutional change and structural reform, we believe this ancient sovereignty can shine through as a fuller expression of Australia’s nationhood.….

We seek constitutional reforms to empower our people and take a rightful place in our own country. When we have power over our destiny our children will flourish. They will walk in two worlds and will be a gift to their country.”

This Statement is an appeal to the nation to give aboriginal people not only recognition in the Constitution, but to make structural changes which will give them a voice in the Australian Federal Parliament. They want to advise it in all matters relating to the welfare of their people, their culture, lands, history, and their future.

Much of the dysfunction in remote Aboriginal communities stems from the paternalistic and authoritarian control exercised by Government officials and the failure to involve local people in decision-making. This creates a sense of powerlessness and hopelessness.

As Fred Chaney, a former Aboriginal Affairs Minister, said, the Aboriginal communities themselves need to be the primary drivers of change. Where local people are given responsibility for finding their own solutions to social problems in their communities and given on-going funding to enact these, when they are given responsibility for environmental management, land care, and the preservation of species of plants and animals, there is a flow-on effect in areas of employment, health, education, tourism.

Where local indigenous languages are taught to the children by the elders and cultural centres established for painting, weaving and storytelling, this can contribute to a deep sense of pride in their culture and bonding with the land.

Unfortunately, Governments have in recent decades abolished the Aboriginal and Torres Strait Islands Committee, a regionally-structured aboriginal representative group, abolished the assets of local community councils, abandoned remote community housing programs, and put out to tender to commercial enterprises based many thousands of miles away the management of community infrastructure which the communities themselves had built up over years. Privatisation is a disaster, especially in regard to indigenous communities whose bonding is based on sacred stories, shared song lines and sacred lore.

In the Uluru Statement, the elders also insisted on a Treaty or Makarrata. Unlike New Zealand, with its Treaty of Waitangi of 1840, the British colonisers never struck any Treaty with Australia’s Aboriginal nations. The land was simply taken and the rights of indigenous peoples ignored.

The story of the struggle for land rights is one of immense courage and heroism in the face of massacres, incarceration, and racist oppression. Aboriginal people were dispossessed of their tribal lands in what were called the Frontier Wars. There were mass killings perpetrated first by British soldiers, then by settlers and police and finally by Native Police working under white officers.

“Many white fellas were too greedy for our land and didn’t see us as fully human” according to Francis Jupururia Kelly. To date, over 500 massacre sites have been located. As Europeans established farms and cattle stations, many Aboriginal people were killed, others paid in rations to work on the stations or forced onto Reserves, their children abducted from their communities by police and made to live on Missions. There they were forbidden to speak their native languages or learn from elders their sacred ceremonies. The goal was ‘assimilation’.

But Aboriginal people refused to accept the extinguishment of their native title rights or give up their ancestral heritage. They refused to simply ‘die out’ and there have been many protests mounted by Aboriginal activists decrying the discrimination and oppression.

In 1967, as a result of a Commonwealth Referendum, Aboriginal people were first granted Citizenship Rights. A landmark ruling of the High Court of Australia in 1992 declared that Australia was not, at the time of European settlement, ‘Terra nullius’, that is, land belonging to no one (with its implication that it belonged to the Crown). Instead, the Court held that the common law of Australia recognises a form of traditional native title.

In the light of all this, the Uluru Statement is an extraordinary gift that the First Australians are offering the nation, one that, if accepted and acted on, could lead to a healing of the wounds which continue to bleed and disturb the nation’s psyche. It could lead to a kind of Truth and Reconciliation process which would acknowledge the crimes committed since colonial settlement and the great sufferings of those whose ancestors inhabited this land for over 60,000 years.

This in turn could go a long way to expurgate some of the ‘demons’ which plague our nation and feed its fear of outsiders – the ‘Asian Invasion’, ‘boat people’ and refugees in general.

In a remarkable speech to Aboriginal people at Alice Springs in 1986, Pope St John Paul II said that the Church in Australia can never become the Church that God intends it to be until it has recognised and welcomed the unique contribution of its Aboriginal brothers and sisters. Something similar could be said of the Australian nation.

We cannot ‘Advance Australia Fair’ as our national anthem proclaims until we have accepted and welcomed the contribution of black as well as white people – along with all the other races that make up our richly multicultural nation. But, obviously, the people who have cared for the land and celebrated its sacred meaning from the beginning of human habitation hold a unique place.

Genuine reconciliation can only come about if the truth is told – the truth of the Frontier Wars, the theft of Aboriginal lands, the attempt to wipe out Aboriginal cultures, the separation of Aboriginal children from their parents, and so on. These realities need to be mourned and lamented. And the Christian Church could play a significant role in all this. Much depends upon the genuine desire of the Australian people to listen to our indigenous brothers and sisters, to understand something of what they have suffered, to acknowledge the crimes committed, the injustices of the past and of the present and to listen to their voices. Hence the need for a First Nations voice in Parliament.

They have much to teach us surely about ourselves, our arrogance, about our sense of cultural and moral superiority. As a nation we need to lament our wilful blindness, and step back, allowing them to shape their own destiny. Only this way is it possible to heal the wounds of the past.

Galarrwuy Yunupingu put it this way: “What Aboriginal people ask is that the modern world now make the sacrifices necessary to give us a real future – to relax its grip on us, to let us breathe, to let us be free of the determined control exerted on us to make us like you. Let us be who we are – Aboriginal people in a modern world – and be proud of us. Acknowledge that we have survived the worst that the past could throw at us, and that we are here with our songs, our ceremonies, our land, our language and our people – our full identity. What a gift this is that we can give you, if you choose to accept us in a meaningful way.”

In many cities, however, the languages, the songs and sacred dances celebrating the Great Ancestral Spirits have been lost. Aboriginal people are 3% of the Australian population, yet they make up 26% of the prison population. Suicide is all too common, even among children. Many First Nations people however do not want to be seen as victims. They are survivors, proud of their culture and history and determined to make their mark and assert their identity.

In literature, drama, music and the arts, and in sport they bring together the richness of their culture and the pain of their exclusion – but also their ability to laugh at themselves and at us. One of their great gifts is the extraordinary ability to forgive.

Clearly, the nation is at a crossroad. We have spent the last 200 years or so trying to deny the shadow side of our birth as a nation. Coming to terms with this history is vital for the future not only of indigenous people but of us non -aboriginal people as well.

The Uluru Statement of 2017 calls for a voice in Parliament, truth-telling about the appropriation of tribal land and about the savagery of the invaders and their crimes against humanity. The anthropologist William Stanner has spoken of the Great Silence by historians in regard to the atrocities of the past. He called it “a culture of forgetfulness”, adding that, “the destruction of Aboriginal society was not the consequence of European development but its price”.

The historian Mark McKenna points out in his Quarterly Essay 69 entitled ‘Moment of Truth’: “It is precisely this recognition – that the material success of Australian society was built upon the dispossession of indigenous Australia, a history that clearly demands treaty and settlement – that causes so many to avert their eyes.”

He goes on to point out that it was not just the massacres that the nation wanted to forget about: “It is the forgetting of a whole culture, a whole way of seeing the land. Aboriginal people had a name for every plant, creature and landform in the continent. Much of the detail of that cultural knowledge, embedded in ceremony, songlines and every aspect of their daily lives, has been lost forever in many parts of the country.”

There were of course those who would not allow this rich lore to be forgotten – who showed genuine concern about the appalling treatment of Aboriginal people. These included Christian missionaries, some of whom, along with anthropologists, did much to help local people to preserve Aboriginal languages and who respected their customs and sacred stories. Catholic missionaries – ordained, religious and lay – have done a lot to promote Reconciliation and to help the communities they work with to deal with alcohol and drug abuse, encouraging them to integrate their traditional beliefs with their belief in Jesus.

As one man in Warmun Eastern Kimberley’s used say: “We are two way people – we have Jesus ‘dreaming’ and the ‘dreaming’ of our Spirit Ancestors”.

The Uluru Statement from the Heart is a sign of hope and reconciliation which we Australians need to embrace and act on if we are to find our identity as a nation. And the Christian Churches are playing a significant role in this conversation.

Full text of the Uluru Statement, May 2017, can be found here: