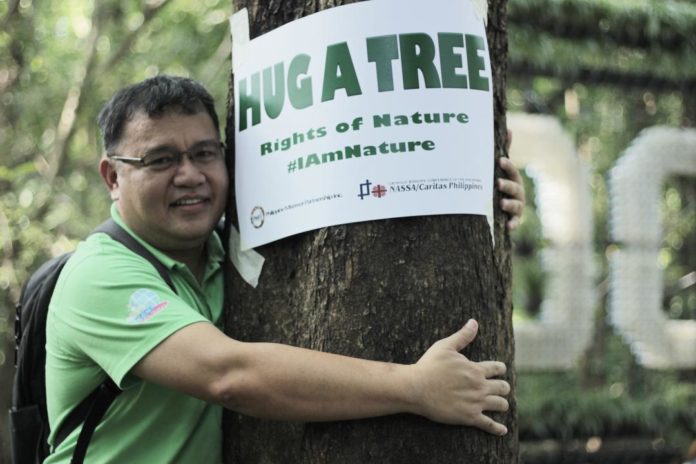 John B. Din is the Columban Justice, Peace and Integrity of Creation Co-ordinator in the Philippines. Here he reflects on October’s Synod on the Amazon.

The Synod of the Amazon has a particular interest to me not only because I worked for almost 20 years in two of the nine countries connected by the Amazon Rainforest, Brazil and Peru, but because of its importance to the current challenge of climate emergency.

I am back in the Philippines eight years now responding to a complex cry of the poor victims of the government’s war on drugs, and the cry of the Earth being plundered by a system heading towards suicide. Both are products of a world view that is estranged from the natural world.

What does a Synod of the Amazon, from the other side of the planet, have to do with the Philippines?

In 2017, Pope Francis announced the Synod of the Amazon. It is a synod that focuses on the Amazon, a particular biological community, yet it is not only about the Amazon, for as the preparatory document says: “We begin with a specific geographical area in order to build a bridge to the other important biomes of our world: the Congo basin, the Mesoamerican Biological Corridor, the tropical forests of the Asia Pacific region, and the Guarani Aquifer, among others.”

The Amazon Synod is the portal with which the Church in South America enters into the bigger reality of the common home. Thus, the Synod has many things to say to the different biological communities around the world, including the Philippines. It invites the people of the Philippines to reflect upon what our distinct habitat and the community of life under crises have to say about new paths for the Church and for integral ecology.

In particular, it asks the Filipino people what the current destruction of the Philippine forest and its biodiversity has to say to us about patronage politics, about our economic system’s obsession for growth, and, most importantly, about who we are. As Christians, we are called to review our tasks as disciples and missionaries.

The Sierra Madre Mountain Range is known as the backbone of Luzon, the longest mountain range in the Philippines that stretches from the provinces of Aurora to Cagayan in the island of Luzon. It is the largest surviving territory of old-growth tropical rainforest, serving as a natural shield against typhoons coming in from the Pacific Ocean.

Its continuous forest landscape represents about 40% of the country’s forest cover and it supplies water to agricultural lands and the city of Manila, which now has a population of almost 13 million.

In a span of 100 years, the rainforest cover of the Philippines was reduced from 21 million hectares to 5 million hectares. This plunder was not just about the forest but includes all forms of life that thrive in the complex rainforest ecosystem, including the indigenous people.

The Sierra Madre is home to the indigenous Agtas and Dumagats. They survive through gathering forest products and hunting wildlife. I had the privilege, together with a group, to spend Holy Week 2017 visiting different indigenous communities in Sierra Madre.

We visited the area where the government is planning to build a dam on the pretext of ensuring water supply to Manila. We visited an indigenous community to find out about their spirituality and how they related with the sacred. Their insight about their deep relationship with the natural world was not revealed through words but through how they lived.

They enjoyed the heavy pouring rain that almost left us sleepless the previous night in their small hut, exposed to wind and rain. What we saw was a sense of at “homeness” with the natural world. There is an innate familiarity with the natural world that no words can adequately describe. That familiarity points to the current scientific understanding of the origin of everything: that we come from the same source. Laudato Si’ puts it beautifully as our goal in spirituality and education:

“We lack an awareness of our common origin, of our mutual belonging and of a future shared with everyone.”

Pope Francis’ call to care for our common home comes more naturally to the Dumagats than to most of us, who reduce our home to a walled space and reduce our concept of family to bloodlines. Thus, it is imperative to expand our insight of home and family, and let the Laudato Si’ framework of interconnectedness breathe fresh air into what we are used to.

It is imperative to recover that interconnectedness lived long ago and today by the indigenous people around the world, now affirmed by the current scientific understanding of the origin of everything.

The United Nations defines sustainability as the ability of the current generation to meet its needs without compromising the future of the next generation. So, how do we reverse prevalent destructive trends? Drawing from the experience of the Dumagat people, there is a need to have a new kind of relationship with the natural world.

It is essential to have an understanding of the actual dynamics of the emergence of life in the whole universe; an understanding of who we are in relation to all forms of life. We are a privileged generation to have this insight available to us. This insight of interconnectedness – strongly affirmed in Laudato Si’ – needs to be the organising principle in all spheres of life – social, politics, economics and spiritual.

Yet, this insight is struggling to influence our policies, let alone the broader picture. Our refusal to embrace who we are – the conditions of our emergence – has led to the assault of the natural world. Currently, Sierra Madre is threatened with the construction of dams. Columbans have supported the initiative of various non-governmental organisations and faith-based organisations to oppose the construction of the dams.

The Columban Missionaries in the Philippines are celebrating 90 years of mission in Luzon, Negros and Mindanao. The theme, “Celebrating Our Commitment to the Poor and the Exploited Earth”, captures the way Columbans have lived mission in the Philippines. Columban work with the poor has brought us to the much bigger reality of the climate emergency which poverty and oppression point to.

The mindset that creates and oppresses the poor is the same mindset that plunders the natural world. This insight has inspired the Columbans in the Philippines to tread the road less travelled, that is, working with the indigenous people in protecting the forest from logging and mining. In 1988, the Columban Missionaries, particularly Fr Sean McDonagh, were instrumental in the formulation of the Pastoral Letter of the Catholic Bishops Conference of the Philippines (CBCP) entitled, “What is Happening to Our Beautiful Land?”.

And just recently, Fr John Leydon addressed the plenary of the CBCP pleading for a sequel to the 1988 pastoral letter to address the climate emergency. Because of our commitment to the poor and the exploited Earth, the Philippine church is looking to us for leadership.

Together with Global Catholic Climate Movement (GCCM)-Pilipinas, Columbans are involved in ecological education through their works with the indigenous people in Mindanao, interfaith dialogue, sustainable agriculture, rain forestation programs and creation of seed banks.

With the support of the Columban Missionaries and other groups, GCCM-Pilipinas is organising training workshops on “Deep Journey into Laudato Si’” to dioceses where Columbans have worked. For the past three years, GCCM-Pilipinas has been organising activities during the Season of Creation, as part of the effort to promote the ecological dimension in our liturgical celebrations.

This inspires us to encourage others to do the same. This prophetic act is an indictment of the current financial system which entices religious institutions and dioceses to invest their money in fossil fuels and extractive industries.

The Synod of the Amazon is important to us in the Philippines because it reminds us that our local realities are the loci where our collaborative efforts to care for our common home need to be forged, nurtured and sustained.

This is the ninth in a series of Columban articles this year, leading up to the Synod on Amazonia in October 2019 at the Vatican.

John Din is in his 27th year as a Columban Lay Missionary and is now back in his native country after seven years on mission in Brazil and 11 years in Peru. He is from the Diocese of Pagadian in Mindanao, where many Columban priests have worked over the years.