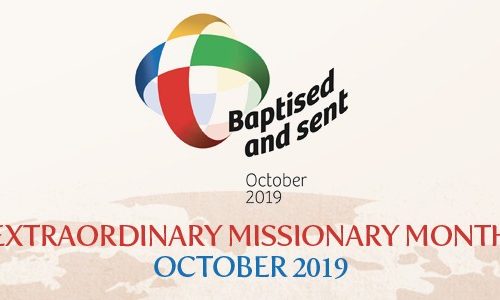 Archbishop Kieran O’Reilly has welcomed the Extraordinary Month of Mission which will be celebrated this October.

Maximum Illud highlighted the need for missionaries to disassociate from the ideas and consequences of empire and colonialism while asking them to support local people for local church, so that ultimately, they could independently guide the faith of their own communities.

Mission Month 2019 will be an extra-special month of prayer and action to help the faithful to rediscover the meaning and importance of mission in the modern world.

Schools, religious orders and congregations, dioceses, parishes, communities and individuals are all being invited by Pope Francis to get behind this worldwide Church initiative.

The Far East magazine has devoted its September/October 2019 issue to the Extraordinary Month of Mission and the Synod on the Amazon, which both take place in October.

It will publish an article by Fr Neil Collins, the Society’s historian, on how Maximum Illud impacted the newly established Missionary Society of St Columban.

Speaking about the Extraordinary Mission Month, Archbishop O’Reilly, who is Chair of the Bishops’ Council for Missions said, “I welcome this extra-special month of prayer and action. From every parish in Ireland men and women have travelled literally to the ends of the earth as missionaries.”

“Our missionaries have contributed enormously to the mission entrusted to the Church by the Lord.  It is an involvement that we can all be rightly proud of. As Pope Francis notes ‘Faith is strengthened when it is given to others’!’’

World Missions Ireland is responsible for the coordination of the Extraordinary Month of Mission.

World Missions Ireland is the Church’s official charity for overseas mission and is part of a worldwide network of 120 offices under the coordination of the Pontifical Missions Societies.

National Secretary, Julieann Moran commented, “As the Pope’s official charity for overseas mission, we were very excited about this initiative. When an ‘extraordinary’ year or month is declared, the Pope is asking us to become more focused and attentive during this special time. Looking at Maximum Illud we see a request that is as relevant today as it was 100 years ago – a request for us to explore and deliver new ways to bring the message of Jesus to an ever-changing world.”

World Missions Ireland has created an ‘Extraordinary Mission Month Facts & Toolkit’ resource, available to download from their website at www.wmi.ie.