Home Reflections China: Advent as a time of waiting and hope 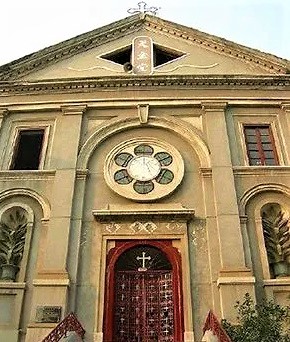 Reflection by a Catholic in Wuhan who prefers not to be named.

As Zhu Liqing walked towards the altar in the Offertory procession for the first Sunday of Advent in Wuhan, I wondered about what might be happening deep in her heart with each unfolding step along the centre aisle of Holy Family Church.

In February, her husband died from the effects of Covid-19, his elderly parents actually recovering from the infection at the same time.

As the celebration of Mass continued, I thought for a while about the benefits of a community gathering to pray each Sunday even if we know just a fraction of what is happening in the lives of the people who share the time with us.

For Zhu Liqing there is no concealing what has dominated the year. In this busy spacious century-old church, Advent hymns filled the cold air of the approaching winter, the wearing of facemasks actually providing some comfort in a part of the country where churches do not have heating systems.

After the conclusion of Mass, I met Zhu Liqing near the side door. We spoke for a while, the conversation inevitably moving in the direction of what her family has endured this year. During the short few years since she was baptised into the faith of her in-laws, her understanding of the Christian message seems to be deeply rooted in the centuries of experience accumulated in the universal Church.

As she smiled and spoke about what has been happening for her family, I realised again that there can be far more happening in the life of the Church than initially meets the eye.

While her loss this year has been tragic, she actually sees areas of hope that are now appearing on the horizon for the family, all of which is seen by her as the gentle activity of God.

During the next few weeks her daughter expects to give birth to a child, a first grandchild for Zhu Liqing. As she spoke, it was easy to see that this is a deeply meaningful development for her.

With a bright-eyed articulation of her own wishes, she said that she was originally hoping that the child would be born on Christmas Day but that she is willing to compromise and accept that predicted date of January 25th. Perhaps a date between Christmas and Easter will eventually have its own meaning for the family.

She also smiled as she mentioned that she would be going to stay with her daughter for a few weeks before the birth takes place, all of this presumably a preparation for an ongoing contribution to the rearing of the next generation which is seen as normal for grandparents in China.

As we said farewell to each other I felt privileged to have met someone who could radiate such hope in a year of such unexpected loss.

Later I took some time to sit in the church which was now much quieter than earlier in the morning. Aware that I was sitting in a church that has witnessed the ebb and flow of an unpredictable Church history, I wondered about all that has happened and all that is still happening in the institutional Church and in the lives of its people.

At the other side of the city renovations are taking place at St Joseph’s Cathedral, part of the preparations for the day when the diocese will have its new bishop ordained, possibility within a few weeks.

People expect that such a day will only arrive following agreement between the Vatican and China’s civil authorities on a mutually acceptable candidate. While there are mixed opinions about this approach, many in this area believe that a diocese without a bishop for 13 years needs to find a way forward if a meaningful pastoral direction is to be established.

As with some other appointments of this kind in China in recent years, agreement will also be needed on the episcopal area that is involved, the traditional areas of the mid-20th century not reflecting how amalgamated areas are currently administered.

In a country where all churches were still closed a little over 40 years ago, perhaps we can hope that the unfolding of a similar number of years will bring its own share of positive developments.

While the civil authorities keep a close eye on leadership roles in the Church, Sunday morning conversations during Advent can be a reminder that leadership roles find a large part of their relevance in how they support the people whose lives are affected by the winds of change that are faced on a daily basis.

These people can be highly attentive to how a supportive Christian community can help them to eventually see a star of hope rising above the distant horizon to announce good news.