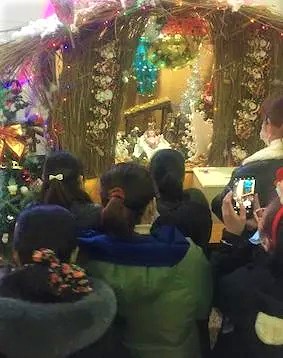 Beginning the Vigil Mass on Christmas Eve, a gentle word from Fr Paul encouraged the people to be grateful for the opportunity to gather to celebrate the Nativity at the Church of the Holy Trinity in Xiantao, about 100 km west of Wuhan.

From where I was sitting in the bright and spacious church that was opened just three years ago, it felt that his message was clearly understood by the congregation who had filled all the pews and the entire back of the church. His encouragement to be grateful was made against a backdrop of recently introduced restrictions on churches in many of China’s big cities as part of the effort to avoid a new wave of Covid-19 which is still finding way to emerge across the country.

Fr Paul then said that he did not even need to mention the city of Xian, a reference to the city of 12 million residents that went into strict lockdown a few days before in an effort to contain a local outbreak. China’s ongoing zero-Covid policy is also challenged by a few cases of the Omicron variant which have slipped through the normally rigid quarantine system for all foreign arrivals.

As the choir led the people in singing Chinese translations of Christmas hymns that are well known around the world, a visual feature that stood out for me in the church was the variety of heavy coats that the people were wearing, this including the many young children in the congregation.

Snow had been forecast for Christmas Eve. The low temperatures seemed to indicate that the forecasters were accurate. While the snow did not arrive, the lack of heating within churches and most homes in this area of China meant that people were well prepared for whatever the elements would bring.

The gospel reading, which announced that Mary and Joseph sought a place to stay in Bethlehem and eventually settled for a stable, seemed to be a story that the people in the church in Xiantao could easily understand in terms of the physical challenge of embracing the cold of the night.

In his homily Fr Paul reminded the people that the birth of Jesus is the great news that goes far beyond the illusionary joys offered by much of what is promoted in our modern world. The simplicity of appearance among the people suggested that many would find some consolation in this message, their basic needs probably being on the vulnerable borderline of being fulfilled.

As the Mass concluded Fr Paul led the procession to the nearby crib to put in place a scaled-up figure of the child Jesus, the larger proportions being a normal part of Christmas cribs in this part of China, the practice being well accepted and presumably having its own meaning for the people.

With the offering of incense and a hymn, the liturgy concluded, thereby providing the signal for the people to move towards the crib to gather in prayerful silence as the opportunity arose.

China is preparing to host the Winter Olympics in February. With questions about the effectiveness of the locally produced vaccines if Omicron were to begin spreading here, with ICU beds being just a fraction of what is normal in many western countries, and with a city of 12 million people already in lockdown, it would seem that the beginning of 2022 will be a challenging time for those who make decisions at a national level.

Perhaps the perseverance of the Catholics who gathered here on Christmas Eve to bravely face the cold temperatures is part of what will be needed in the New Year, along with a prayer perhaps that those who struggle on the margins of society will be supported to navigate their way through another year of the unexpected.