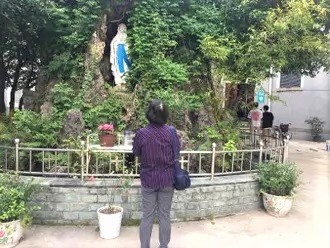 Arriving at Wuhan’s Holy Family Church shortly after 6 o’clock on Sunday morning, I felt quite unsure about what to expect. A message that had been circulated a couple of days earlier was quite clear in announcing that there would be no Mass on Sunday due to local concerns about Covid-19.

However, Wuhan has not recorded any virus cases for several days. Informal discussions and a little guesswork by some friends led to the conclusion that there might be some emerging flexibility about liturgical celebrations in the city.

At the road I asked the Catholic woman who recently took on the role of Sunday morning gatekeeper if there would be a celebration of Mass. Her response was somewhat cautious, not shedding much light on the situation but yet not indicating that an early morning journey was in vain. With the main door of the church firmly closed, I proceeded up the slope towards the side entrance.

The presence of a couple of people praying quietly at the grotto seemed to be a hopeful sign of what might happen later in the morning. A kind greeting and a friendly conversation with a university student whose education since early in his high school years has focused on playing the saxophone gave further encouragement that a flexible interpretation of pandemic rules might prevail. He had brought a friend to the church for the first time and was obviously hoping that his friend would have an opportunity to take part in the a liturgical celebration.

Entering the 130-year-old church, there was further encouragement as I saw about 30 people sitting quietly in expectation of what might happen. Sitting down at one side of the large ornate church I looked around and saw a few people that I recognised, each of them with their own unique experiences of life, many of them touching deeply into the vulnerable areas of human life.

A father carried his toddler child. A blind woman in her 80s sat near the front of the church with her daughter, the blindness from birth being a large part of her story as she grew up in a nearby Church orphanage so many years ago. A tall young man living with autism arrived with his mother. A mother who lives in the simplest of homes was praying in her seat near the front of the church, the colourful setting being a complete contrast to the plain home where she had set out from on her bicycle earlier in the morning. Later a Nigerian man who believes in giving generous tithes took his place at a pew in the middle of the church.

At 6.30am a short liturgical procession announced that there would be Mass for the 4th Sunday of Easter. Without any organ being played as in normal times and with no announcement of a hymn number, someone began the singing of an entrance hymn with all others soon joining in. Throughout the Mass hymns were sung in the same way. The recently appointed parish priest and assistant priest led the celebration. The Gospel reading announcing that the sheep that listen to the voice of Christ will not be lost, seemed appropriate in a city that has witnessed so much over the past two years.

At this church the celebration of Holy Week and the Easter Vigil had been arranged in a similar way, each liturgy celebrated so that the needs of the community were kept in mind, while at the same time seeking to avoid causing problems by overly transgressing local guidelines on the pandemic.

Each of the Sunday celebrations since the Easter Vigil has been crafted within a similar balance of caution and pastoral realism. Sunday’s Mass concluded within an hour and a few people went to the confession boxes near the main door. With choreography that would seem to be as good as any that gives structure to Chinese opera, all indications were that the church was moving in a very steady way to becoming a quiet place by 8 o’clock, the normal time for Sunday Mass. If anyone were to visit to check what was happening at the normal Mass time, the most that they would be likely to see would be a couple of people praying, but certainly not see any liturgical celebration.

As the people were leaving, some greeted each other briefly while a few chatted for a few minutes. A friend invited me and two others to go for a light breakfast to a nearby noodle restaurant where social distancing was neither expected nor possible. As the four of us sat on stools using a long shelf by the wall as our table, the conversation covered a range of areas from the pandemic to the more personal aspects of life.

A moving story told by one woman about her personal recovery from the edge of despair was followed up by an assuring affirmation from her that faith is what has brought her hope over the past four years, the bright expression on her young face confirming the depth of her belief in what had been said. Further along the narrow table a recently baptised woman contributed her view on what her faith means to her, the demands of a life of simplicity etched on her face in a setting where she probably rarely leaves the immediate neighbourhood where we were eating.

The ongoing, unpredictable and varied way in which the season of Easter is being celebrated in this part of Wuhan seems to have a life of its own. I would not attempt to predict what the next couple of weeks might bring. However, as was affirmed at breakfast, Easter brings great hope to our lives, a hope that flows from the resurrection of Jesus in a way that overcomes all the trials that can burden our lives.

Perhaps the varied and unpredictable dimensions of these weeks of the Easter celebration in Wuhan have some similarities with the unpredictable days experienced by the followers of Jesus in the days after his resurrection, unexpected developments in which they were eventually led to the wonderful realisation that all suffering and death is eventually swallowed up by God’s love.