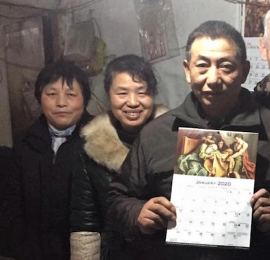 While Covid-19 is now raging in other parts of the world, the virus has subsided in China. In Wuhan, where it started, restrictions are very slowly being lifted. A Catholic based in the city, who has been living under lockdown since February, has written this reflection for Independent Catholic News.

Early last week I received a phone call from a friend. He-Longgang invited me to his family’s home for an Easter Sunday meal with his parents, his brother and the extended family. The gradual easing of COVID-19 restrictions in Wuhan has allowed people to move around a little easier than before. However, many people still stay at home, caution being their priority, a fact reflected publicly in the way schools throughout China remain closed.

Following 11 weeks of eating alone, an invitation to join the He family for lunch on Easter Sunday was a much-appreciated step in the gradual return to normal life. My more recent visit to the family’s home took place just two days before the January restrictions were imposed in Wuhan.

On that evening we had an early celebration of the new year. As on other occasions in recent years, their wholehearted generosity could be felt in every word and gesture. An invitation to be with them on Easter Sunday seemed like an appropriate way to celebrate the Resurrection, the emergence of new life from the tomb, the liturgy of the Church coinciding with positive developments in the containment of the coronavirus.

As Holy Week unfolded my mind occasionally moved to what was due to happen on Easter Sunday, the opportunity to be with others and to talk about these recent weeks in which so many people have needed to adjust their lives in the most unexpected ways.

My first meeting with the He family took place at Holy Family Church about 10 years ago. A few years earlier they moved from the countryside to the city in search of a better life. They see the move to the city as one that has been beneficial to them even though urban life is not particularly easy.

Mr He delivers bottles of gas to homes and late-night food stalls using a big electric motorbike, delivery within a few minutes of receiving a phone call being the key feature of his heavy work; a requirement that can take him away from a family meal at a moment’s notice, a reality that is accepted as normal by everyone in the family.

The home of the extended family begins at the doorways of two small rooms at the street, rooms that link to other rooms further in, the last pair of narrowing rooms connected to each other by a door to form a rambling residence for three family units. One room has a small stairs that leads to an upper room, a wooden structure that wavers a little as people walk across its bare floor.

Windows are in scarce supply in a setting where it is difficult to know where the boundaries of each family unit begins and ends. In the small room where we have eaten our meals in recent years, a single nail on the wall holds a number of religious calendars that have accumulated year after year, a feature that brings its own colour to the home as well as reminding visitors that people of deep faith live here.

Having been to their home on a number of occasions, I am familiar with the family’s polite ways of welcoming visitors. When they receive the traditional gift of fruit that visitors bring to their home, they respond by saying that there is no need to bring anything, emphasising that we are actually one family because we are members of the same Church. Most of our meals have taken place in the second room, a narrow space where the square table can facilitate about ten people, some sitting on stools and some standing within easy reach of the food.

Invariably I am given the soft seat at the table, the single bed beside the wall. In this humble setting the food is a culinary delight as one traditional dish follows another. On each occasion the meal includes one of my own favourites, a thick soup of lotus root and spareribs, one of Hubei’s specialities.

On Good Friday, I received another phone call from Longgang. This led to further clarification about the arrangements for Sunday. The time for lunch was also finalised during the phone call with spot-checking taking place with his family members. He said he was not sure about the bus details from my side of the city to their area. However, I assured him that I would be fine. As the distance is not too far, I had in mind the possibility of going there by bicycle so long as the weather would be suitable.

In anticipation of the Sunday outing I decided that it would be good to check how the new regulations would allow me to get out beyond the security gate of the housing compound. At the gate I was told how to obtain the new health code on my mobile phone. This is a new system all over China that allows tracing of people who leave their housing areas, get on public transport or enter shopping centres and big supermarkets, a system that can alert people at a later stage if they have been in the same area as a newly diagnosed coronavirus case.

The prospect of having a recorded close contact with a new virus case and being recalled for quarantine is likely to ensure that people continue to restrict their movements during the next few weeks.

Having processed the health code, I also availed of the opportunity to go for a walk outside the housing compound, my first venture of this kind in about seven weeks. During this 30-minute walk the world looked brighter and more interesting that it had for a long time. Even though restrictions have eased, it was noticeable that the streets were very quiet and that there were just a few people emerging from the Metro station at a time of the day that would normally be busy.

Holy Saturday brought a growing sense of anticipation for me with the impending celebration of Easter and the day when I would be sitting with the He family for Easter Sunday lunch. On Saturday evening I received another phone call from Longgang. This time, somewhat to my surprise, he expressed concern that it might be difficult for me to use the health code to get on the bus on Sunday because there can be an issue with the recognition of some codes.

Aware of my option to go by bicycle, I told him that the bus details were not really a problem for me. I then explained that I could go there by bicycle.

He paused for a while and then I could hear him consulting with his family for a few moments. After a short time, he spoke to me again and said that there might be a problem with the security controls closer to their home, each set of narrow streets being monitored as individual units so as to restrict the unnecessary movement of people. With this announcement I realised that it was now time for me to listen more carefully to what was actually being communicated.

A change to their plans was obviously needed due to their new concerns. We agreed that it was best to cancel our Easter Sunday lunch and wait for another time to meet. Having agreed to wait a few weeks, Longgang then passed the phone to his mother – her enthusiasm for an eventual meeting at their home being as warm as I had even experienced when I was actually with them.

Then she passed the phone to her husband and we also exchanged good wishes for Easter, he expressing his thanks to God that the entire family has been safe during these weeks of uncertainty.

Our previous days of planning had led to a build-up of expectation, a looking forward to being with each other in a familiar place to celebrate Easter. The eventual change can be seen as another side of how the current restrictions in Wuhan still affect daily life. Again, we need to be patient. However, we are getting closer to the day when friends will meet each other.

Easter has been celebrated by families in Wuhan in their own homes. Catholics have watched the Easter ceremonies on the internet, whether the celebrations have taken place in other parts of China or with Pope Francis leading ceremonies so meaningfully in Rome.

While we continue to wait, we also believe that during the next few weeks we will be able to gather again and be nourished in body and spirit at the same table. When it happens, it will also be our communal taste of the Resurrection, the experience of one family gathered together in renewed hope under God’s protective care.

With thanks to Independent Catholic News