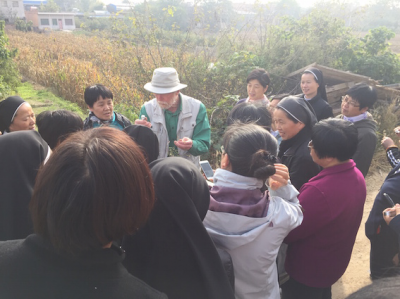 This is the ninth exclusive ICN report from a Catholic, who lives in Wuhan and prefers to remain anonymous, giving a first-hand account of the situation in the city at the centre of the Coronovirus pandemic.

On Wednesday morning of last week, I had an unexpected visitor to my apartment in Wuhan. During these weeks of COVID-19 restrictions visitors are as scarce as tourists in central China. Although the visit was unexpected, my guest did not make any demands on me, appearing quiet happy to look around for a while, the scattered books perhaps giving some insight to my areas of interest. Then she decided to depart. However, it is not easy for a queen wasp to fly through a glass window, something she seemed to be just discovering.

I decided to assist. Going to the kitchen I reached for a glass and also picked up a sheet of stiff paper, returning directly to my visitor who was now motionless on the window. With glass in hand I gently approaching the queen wasp and was able to cover her with the temporary cage. Thankfully she moved a little into the body of the glass allowing me time to slide in the sheet of paper in preparation for moving her further along.

Pausing for a moment I brought the covered glass towards my eye for a closer look. She remained calm, her head fixed in one spot and her wings at rest as if pondering her next move in our game of chess. Without asking if it suited her to wait a little longer, I went to the drawer and brought out a small hand lens, one that provides considerable magnification.

Holding the lens near my eye I was treated to a delightful view of a creature of immense natural beauty. Her big eyes filled the rounded edges of her head. Her spiked feet were shaped in delicate detail, indicating a purpose that is mysterious to most of us who have never explored life at this level. Above the feet her legs were formed in short sections linked by small angled joints that led onwards to her fur-coated body. Her timely move to another position allowed me to view her wings, tidy and transparent, linked to the centre of her body at pivot points so compact that one must wonder how such a small part of anatomy can produce the speed and vigour that we are familiar with when this species is in flight.

Grateful for this unexpected encounter, I provided the exit that the she had been seeking a few minutes earlier, removing the paper cover from the glass and allowing her spread her wings and move out to into the morning light. She weaved her way forward into the day probably unaware that she had brightened my morning during a time when other visits are not possible. Since that day I have occasionally wondered about where she might be at this time and what else may have happened for her.

In recent years I have had the opportunity to do some work with religious sisters in China to explore our understanding of the natural world, to look together at what is revealed in small flowers, to look at the night sky and ask about the vast distances from our planet to the stars, so that we might get even the smallest foothold in appreciating the depth of beauty and meaning that is knitted into the fabric of the universe, God’s creation.

In 2015, Pope Francis wrote his first encyclical, Laudato Si. In this superb document he invites the Church and all people of goodwill to see the beauty of the natural world as a unique expression of our creative God, something we must respect and protect, located as we are on a planet that he so wisely calls our common home. In the first paragraph of the encyclical he points out how St Francis of Assisi viewed the Earth as something very close to our hearts, saying that, “our common home is like a sister with whom we share our life and a beautiful mother who opens her arms to embrace us.”

The opportunity to work in this way with religious sisters in China started with the help of Irish geologist and botanist John Feehan, a person of deep Christian faith who encourages people to open their eyes to the beauty of the natural world, to appreciate it as God’s creation, pointing out that the rainforest is actually at our doorstep so long as we pay attention to its presence.

Three years ago, at a rural monastery in Shanxi province, John gave a five-day workshop for 25 Chinese sisters who are members of various congregations. The insightful lectures and outdoor activities opened up a world of beauty and awe that we had not previously noticed. While walking outdoors we used hand lenses to expand our vision of flowers and leaves. Flowers that we brought indoors were viewed with microscopes to reveal a world of colour and wonder that until a few generations ago were beyond the view of most people.

In the evenings, long after we had finished our sessions, some people continued to use the microscopes to gaze at the intricate beauty of the flowers, an indication of how attractive the whole experience was for them. Occasionally a gasp of wonder could be heard as the microscope revealed tiny insects moving about deep within the small flowers, creatures living in a world where size is measured on a totally different scale.

The geology of the area around the monastery revealed another dimension of the creation story, stretching out the seven-day event of the Book of Genesis to a time scale of millions and millions of years. Although the monastery is located a long distance from the nearest city, the nearby town of Yushe has a unique institution, the Yushe Fossil Museum. Inside the main door of the museum is a large photograph of French Jesuit priest Teilhard de Chardin, the only modern theologian referred to by Pope Francis in Laudato Si. During Teilhard’s 23 years in China he visited the Yushe area on a number of occasions to undertake fossil research.

Our week at the monastery brought us in contact with the beauty of the natural world and a few of its multiple layers of history that are held within geology’s vast recordings of time. Regularly, as we looked at some aspect of a flower’s life or viewed an insect with the microscope or heard a description of a life form in a distant era, John posed a crucial question, “what does this tell us about God?” Any attempt to answer this question needs deep reflection.

The unfolding of creation in its immense diversity reveals vast dimensions about the Creator. We now know that story of creation goes back more than 13 billion years to an event first proposed in 1927 by Belgian priest and physicist Georges Lemaître, the event commonly known as the Big Bang, a primordial flaring forth which is the ancestral event of every other event and natural process to have emerged in the unfolding cosmos. Lemaître would surely be satisfied that Pope Francis reminds us in paragraph 84 of Laudato Si that “the entire material universe speaks of God’s love, his boundless affection for us. Soil, water, mountains: everything is, as it were, a caress of God.”

As people within the Church in China seek ways to continue this learning and reflection, two religious sisters have recently attended the ecological spirituality course at An Tairseach, a thoughtfully-planned and creatively managed centre run by the Dominican Sisters in Ireland. Since their return to China these two sisters are already sharing their learnings with others in their own communities and at workshops.

A related interesting development in China has been the 2019 participation by the Vatican in the Beijing International Horticultural Exhibition, a six-month event where the nations of the world had the opportunity to showcase how humanity is intimately linked to the natural world. The participation of the Vatican took place following an invitation by the Chinese government, a uniquely hopeful development within the complicated history of the past 70 years. Not surprisingly, the Vatican’s pavilion at the international arena focused on Laudato Si, well received by the large number of participants, especially the thousands of Catholics who availed of the opportunity to go there.

Humanity’s relationship with the Earth has experienced profound changes since the beginning of the Industrial Revolution in 1760. Blind assumptions in our time about endless economic growth are no longer viable. We live in a world of limited resources. Tragically, life systems on the planet are under increasing pressure due to human activity and in many areas species are becoming extinct, dropping off the edge of the world with minimal realisation on our part that their demise means that they will never again be seen, without us even taking the time to understand their unique place in the fabric of life.

Future generations would surely be better served if we could guarantee all species, including humans, their place on this planet for the next 10,000 years, a mere moment of time in the long history of the universe.

These weeks of COVID-19 restrictions have caused pain and bereavement for many people, a suffering that has no respect for borders. Two families that I know in Wuhan are each grieving for a member of the younger generation that has died. While the medical emergency in China has stabilised in recent days, a huge challenge is now being faced by anxious people and their governments in other countries, some that may struggle due to weaker medical systems.

These weeks of international disruption are reminding us that we live on a planet where we walk together on a road that has fragile boundaries. One virus has shown how human confidence can be easily thwarted. Perhaps these weeks are teaching us that our place on Earth needs to be accompanied by a more humble approach, one where we realise that we are not in control of everything.

These weeks are also revealing youthful creativity among many people who adjust to a new way of living and a new way of expression, showing that the human person is capable of new possibilities. What would happen if the same creativity were used to redefine our relationship with the Earth and all of its other inhabitants, whether they be queen wasps, trees, whales, flowers or worms, all of which have their place within God’s creation? Whether we live in China, Europe, Africa or elsewhere, what would such a conversion mean for the way we live together in our common home? Within the deep mysteries of our beautiful created world, would a new humility allow us to discover God in a new way?

China 8: Trust in God during ‘two months of storms – www.indcatholicnews.com/news/39152