Columban Missionaries DISCOVER THE ART OF PUBLISHING
Home News China: “We are all sisters and brothers” 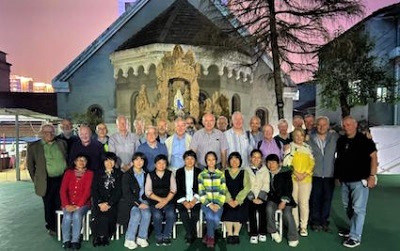 This is the tenth exclusive ICN report from a Catholic – who lives in Wuhan and prefers to remain anonymous – giving a first-hand account of the situation in the Chinese city which was the original centre of the Coronovirus pandemic.

The Archdiocese of Dublin encourages a unique form of ongoing education for its priests and permanent deacons. Each year a study trip to another country takes place, an opportunity for the participants to meet Church leaders and lay people to deepen their understanding of the Universal Church and the missionary Church.

Last November, 17 priests and one permanent deacon set out for a 12-day study trip to China. The itinerary contained the names of a few well known cities. One city on the list was probably less familiar to them, Wuhan.

The initial two days in Hong Kong provided the visitors with an opportunity to meet local Church personnel and to appreciate the pastoral presence of the Church in the heart of a city where so much is focused on the constantly turning financial wheels of the world. A five-hour high speed train journey from the heart of Hong Kong travelling directly north brought the group to Wuhan, a city of 11 million people, a historical crossroads for transport in China, site of the first bridge constructed across the Yangtze River.

For a city with a big population, it has just four Catholic churches. However, three of these churches were built over 100 years ago. All four were shut down for a period of 30 years until the 1980s, their very structures holding the memories that instilled a spirit of endurance and commitment in the Catholic community.

On the afternoon of our arrival in Wuhan we were greeted by the Sisters of Our Lady of Hanyang, a diocesan congregation founded in 1939 by Columban Bishop Edward Galvin. Mass was celebrated at St Columban’s Cathedral followed by a wonderful meal in the humble dining room of the sisters, with the bishop’s photograph overlooking all who were gathered. Good food and a shared faith provided an immediate connection between people from different parts of the world, showing that distance and differences can dissolve when people sit together at the same table.

At the meal we were joined by three teachers of English from a local university, people who have come to China because of a faith commitment, earning a modest income but contributing richly to China’s younger generation, their time in China arranged through AITECE, a faith-based teacher placement organisation.

The conversations were lively and the langauge barrier was overcome in various ways. The guests from Dublin signed the community’s visitors’ book, thereby joining a tradition stretching back 30 years, a written record of all who have been privileged to meet the sisters. The evening ended with a humble request from the eight young sisters, that each of the visitors would give them a blessing.

The second day provided an interesting contrast as we headed out of the city through fertile plains, passing through areas that produce vast amounts of food for the city. The changes of China can also be seen in the rural areas as towns grow into small cities due to ongoing industrialisation. Mass was celebrated at a small new church in Xiantao and the short drive to another new church gave an insight into how eccesial developments in the small city are unfolding. Lunch at this church was followed by a discussion with the administrator of the diocese, a young priest who answered various questions in English, his linguistic abilities polished during his pastoral theology studies in Ireland a few years ago.

By this time the visitors had made the transition from Dublin to China, a leap of experience now being shaped by members of the Church in China, people who grapple with issues that are as challenging as what occurs in any other parts of the world, but particular to local circumstances and a specific time in history.

Departing Xiantao and thankful for an interesting day, we returned to Wuhan to visit Rosary Church, popularly known as the French Church due to its location in what had been a French concession area in previous times. Another linguistic variation awaited the group at this church. One of the resident priests speaks fluent French due to his study of philosophy and theology in Paris twenty years ago. The Dublin side was well capable of this challenge, one of their members stepping forward to facilitate the conversation on this occasion.

The following morning we departed Wuhan, continuing our journey north as far as the Diocese of Zhaoxian, a rural area of Hebei province, one of the heartlands of the Church in China. Our host was the administrator of the diocese who received a PhD in New Testament studies from The Catholic University of America 10 years ago. Again, food formed an important part of this visit, a central part of Chinese hospitality. The opportunity to sit with the administrator to discuss Church issues allowed him to shed light on the challenges as well as the hope that exists for the Church in China at this time.

A short distance from there is the motherhouse of the diocesan sisters who have St Therese of Lisieux as their patron. These sisters are leaders in the care of orphans with special needs in China, a ministry begun thirty years ago with the encouragement of their elderly bishop, a ministry of patient love that saw the growth of orphan numbers followed by a growth in vocation numbers, a development seen by the sisters as God’s work. As was explained by the congregational leader, caring for the orphans as well as the recent establishment of a rehabilitation centre and the expansion of special needs education for the wider community, as well as their parish work and hospital visitations is guided by a very clear motto for their 100 sisters, “Love to the End”.

As we departed that area of China the visitors had moved a long way from the immediate concerns of their parishes in the Archdiocese of Dublin. Their focus was now on a Church that is alive and active in the world’s most populated country, a Church led by people who are young, talented and articulate, involved in many ministries, faced with a range of challenges but trusting that God guides them in what is unfolding.

Our next destination was Xian, a city famous for the discovery of the Terracotta Warriors 40 years ago. One of the city’s architectural gems is the 300-year-old St Francis Cathedral, a compact place of worship with beautiful traditional internal decoration. Attending the Sunday afternoon Mass was a special experience for us, the youthful congregation reflecting an energy and vitality that is common to the Church in China.

A half-hour meeting with Bishop Dang Mingyan provided an opportunity for another good discussion. Three of the local sisters are artists and had arranged an exhibition of their work for the visitors, artwork that expresses the Christian message in Chinese style. The sisters were a little surprised when the visitors requested to buy some of their work but quickly made a good-humoured change from being attentive curators to competent dealers in art.

Our time in Xian included a visit to the Stone Forest Museum, an expansive series of display rooms where ancient texts are etched on huge slabs of stone. Within this solid library is a two-metre high ornate slab mounted on a symbolic dragon. The 2,000 words on this stone record details of the first arrival of Christianity in China, its messengers having travelled along the Silk Road; the stonework patiently carved at the same time as artistic Celtic monks were studiously producing the Book of Kells at the other side of the world.

From, Xian, the ancient capital, we took the five-hour train journey to the current capital, Beijing. Aspects of historical China and modern China stand together in the city whose name means ‘Northern Capital’. The Temple of Heaven, the Forbidden City and the wind-chilled Great Wall provided insight for the visitors into the nation’s past. The popular central shopping area of Wangfujing is the location of the 100-year-old St Joseph’s Church, a place where other churches have stood as far back to the sixteenth century. The enduring faithfulness of the Church in China is visible here each morning as Catholics gather for Mass, the congregation always singing some hymns during the celebration.

Within reasonable distance of the city centre is a link with one of China’s best-known missionaries, Matteo Ricci. He was born in Italy in 1552 and came to China in 1583, arriving to Beijing in 1601. He endeared himself to the Chinese people through his expertise in the Chinese language and through his ability to predict eclipses as well as the movement of stars and planets. He also provided the Chinese people with accurate maps of the world, Our visit to see his gravestone took place on the last day of the study trip.

Perhaps it was an appropriate day because various lines of thought meet at this historic location. Matteo Ricci’s large gravestone is located beside the gravestones of two other missionaries within a neat walled off space, with a neighbouring space containing 60 others. The spacious surrounding property had been the centre of a Catholic parish until 70 years ago, some of the modified buildings still providing clues to this history.

The property is now a centre of education for government officials. Visitors are warmly welcomed by an energetic guide speaking excellent English and available to give an informed introduction to China’s best known missionary. With such contrasting themes running side by side and needing to be weaved together by some kind of logic, this Chinese puzzle may have provided some interesting time for reflection on the journey home to Dublin that evening.

Our final Mass took place at the convent chapel attached to the newly renovated North Church which was built in 1887, a fitting way to give thanks to God for a busy but informative study trip.

On the return flight to Dublin few of the visitors would have expected that Wuhan would soon become a household name internationally. I think we can safely assume that their time in China allowed them to hear the early news about the coronavirus in a compassionate way, know that it was affecting the lives of Chinese people who had so recently offered them such a warm welcome, people who sat with them at the same table, people who share the same faith.

Last Friday evening as Pope Francis gave the Urbi et Orbi blessing while facing an empty and rain-soaked St Peter’s Square, Catholics in China united with people in other countries to watch in silence from far away. During this time, they are fully aware that we are all sisters and brothers, whether we live Milan or Wuhan, Tokyo or Dublin, praying that this storm will soon pass.

China 9: Humility to discover God in a new way – www.indcatholicnews.com/news/39208

China 8: Trust in God during ‘two months of storms – www.indcatholicnews.com/news/39152