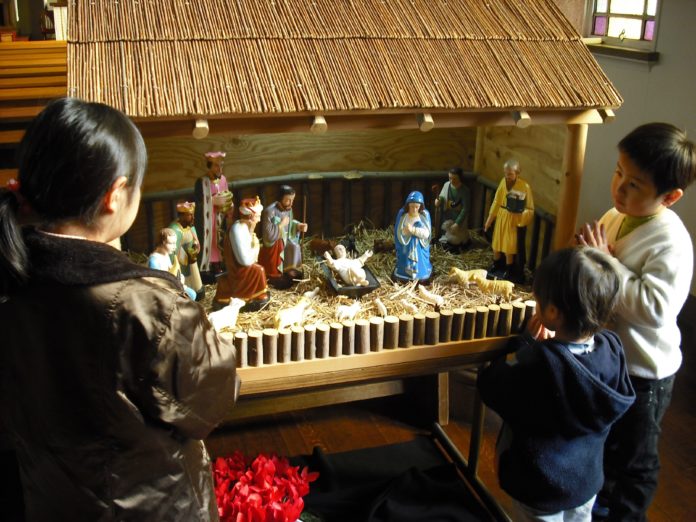 In the December issue of the Far East magazine, Fr Barry Cairns recalls one of the most delightful Christmas presents he ever received.

In the mission parish of Katase in Yokohama diocese where I was stationed, we had a special catechumenate class for couples where the wife was baptised, but the husband was not yet baptised.

Six couples came faithfully to the evening classes. I could sense a growing enthusiasm in five of the men, but one man, Tanaka-san, seemed quiet and worried.

It so happened that at that time I was building a Christmas crib. I had asked an architect parishioner to draw a plan for me. He said, “I have drawn plans for houses and even a church, but never a stable!”

I followed his plan but I was behind schedule. Then Tanaka-san saw my struggling efforts and shyly said, “Can I help you?” I was delighted. He proved himself to be a natural handyman. We worked together off and on for three weeks and had the frame ready for the First Sunday of Advent.

My aim was to create an atmosphere of expectation for Christ’s birth by having the crib frame at the church entrance on the first Sunday, the bamboo roof on the second, straw on the third, Mary, Joseph and an empty manager on the fourth Sunday of Advent. The infant Jesus was solemnly placed in his manger at Christmas midnight Mass by a kimono-clad young girl. 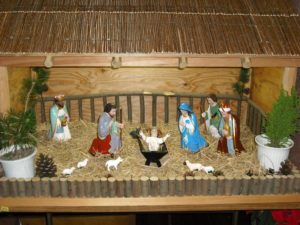 But back to Tanaka-san. He was born in the island province of Shikoku with a long tradition of Buddhism and respect and prayer for ancestors in his family. In a class in early December I had quoted our Japanese bishops telling us that the commandment ‘Love your father and your mother’ means also that after death we pray for our ancestors. Baptism does not cancel this if they belonged to another faith. The cloud of worry seemed to lift from Tanaka-san.

In the week before Christmas Mrs Tanaka said to me, “Let’s got for coffee this week.” At coffee Mrs Tanaka told me, “My husband wants to say something to you.”

I can still vividly recall my reaction! I knew his deep family Buddhist background and so I expected a polite negative to his baptism with the others in the class. But Tanaka-san said, and his voice echoes in my heart as I write this; “Father, am I good enough for baptism?”

I choked with happiness. This was the most beautiful Christmas present I had ever received. It came alive again at the Easter vigil baptisms of six stalwart men, backed by their faith-filled wives.

Since then, over the years, Tanaka-san and I have together done a few other carpentry projects in the church and rectory – also quite a few coffees! He and his wife are a happy, praying couple. Sharing their faith with their children, grandchildren and friends.

Fr Barry Cairns was born in New Zealand in 1931. After studying to be a Columban missionary in Australia, he went to Japan in 1955 after ordination. After eleven years in parish work in Japan, he spent the next 13 years on the staff of the Columban seminary in Sydney before he returned to Japan in 1983. At 86 years of age he still serves in a small parish in Yokohama City.

Subscribe to the Far East magazine here: https://columbans.ie/product/issue-december-2018/ and help support our Columban missionaries and their work to spread Gospel joy.