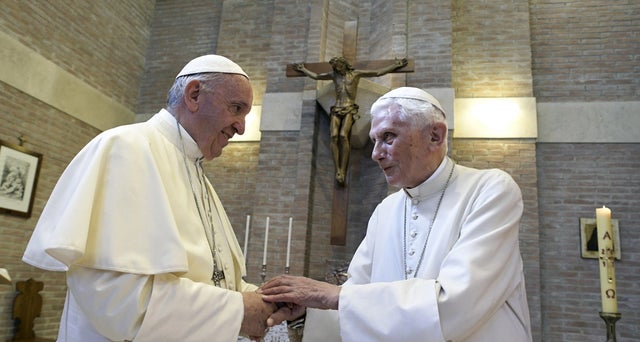 In light of the recent tension over Pope Emeritus Benedict XVI’s comments on clerical celibacy and as Pope Francis prepares to publish his response to the recommendation on ordaining married men made at the Synod on the Amazon, Fr Bobby Gilmore has given us a copy of his 2014 letter to Pope Francis.

Greetings and blessings for 2014.

I am the same vintage as you. I have been a missionary for the past fifty years. I served in the Philippines, Britain as an immigrant chaplain to the Irish, then in Jamaica and presently involved in the re-evangelisation of Ireland through an immigrant agency – Migrant Rights Centre Ireland, Dublin.

In that work in the immigrant apostolate I had the privilege to be associated with Cardinal Cheli and the now Archbishop Silvano Tommasi. In all those missions I also had the opportunity to work with and be inspired and informed by your Jesuit associates.

My reason for writing you is this:

Reading your Exhortation, ‘The Joy of the Gospel’, you have set out themes for discussion, (pp17). I am disappointed that among those themes for discussion there is no mention of fundamental ministerial reform. Does that mean that you are satisfied with a clerical ministry based on European monasticism to meet the pastoral challenges that you so clearly highlight in today’s mean urban side streets?

Over the years in ministry, particularly in the Church of the south, I have always wondered due to lack of indigenous pastoral personnel if the people that I baptised would ever experience pastoral care and growth as adult Christians? At present, and you are aware of this, there is little hope that the vast majority of the faithful will ever have a celebrated Eucharist on the main events of the Christian calendar, Christmas and Easter.

As you know from experience there is nothing romantic or heroic being called to the shack of a poor farmer dying of tuberculosis and having to administer six sacraments. The poor deserve better.

Your analysis of the inequality of the global economy, the rich north and poor south, mirrors the pastoral inequality that exists between the sacramentally nourished north and the sacramentally famished faithful in the south. I hate to say, but it seems to me that the absence of Vatican II reform of ministry is making the Church a prisoner of a colonial paradigm that sees the Christian masses of the south as optional extras to European Catholic aristocratic rulers, lay and clerical, themselves beneficiaries of that paradigm.

Whenever clerical ministry is discussed it gets pushed into a slip road of celibacy. Celibacy or not will do little of itself to solve ministerial paucity. Also, there has to be an urgency of ministerial reform given the institutional failure of the Vatican to confront clerical child abuse. The faithful has lost trust in the institution just as the general public has lost trust in the secular institutions that have caused so much misery in the recent past. This is an opportune time to walk with the faithful and others of goodwill who feel abandoned, clinging to hope.

As you are aware, in the past, history was written through European eyes looking from the north bank of the river. Now history is being re-written through the eyes of the newly independent former colonised nations from the south bank of the river. People in these nations are becoming highly conscious of European violence both against its own people as well as the former colonial oppression, deprivation and the neo-colonial, modern European Union unbalanced trade policies. The Orient sees the West as devoid of spirituality. The growth of Asian and Oriental temples and mosques in the West are evidence of what they think right now.

Indeed, right now one of the big movies has European slavery as its theme. The traditional European clerical ministry in today’s Church has not, nor will it have in its present format, the capacity or the energy to take on the “smell of the sheep” and be able to touch the “special openness of the poor to the faith…our preferential option for the poor must mainly translate into a privileged and preferential religious care.” (pp200)

There is a crying need of new indigenous clerical ministerial dynamism as well as the inauguration of other ministries of indigenous origin. In Jamaica, a business friend, not a Catholic, in conversation used to ask me if ‘my market share was holding up.’ For a while I didn’t get the message. But then the penny dropped and it occurred to me that if my ‘market share’ was declining it was my lack of dynamism and a creative missionary spirit on my part. It is easy to be prisoner of the past if we cannot envisage a different future or if tomorrow is going to like yesterday. For sale signs should not be up outside churches.

I live in hope of structural ministerial reform.