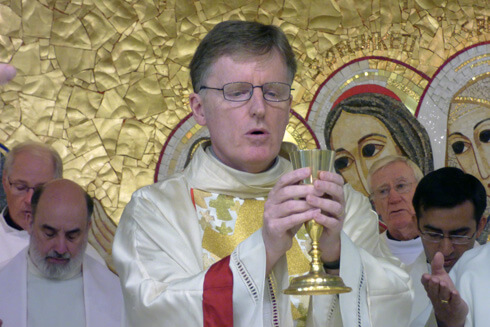 The 100th anniversary of the foundation of the Missionary Society of St Columban was celebrated at the Pontifical Irish College in Rome on 18 May 2018.

Columban founders, Fr Edward Galvin and Fr John Blowick, stayed at the Irish College in 1918 when they went to Rome to obtain approval from Pope Benedict XV for the new mission society.

The centenary celebration at the Irish College highlighted this special Roman connection with the beginnings of the Society. 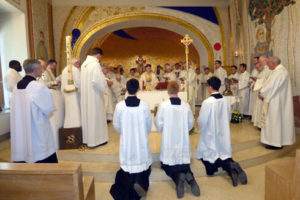 Among the bishops was Bishop Noel Treanor of Down and Connor. Bangor is located in his diocese and it is from here that St Columban set out on his missionary journey to Europe in 590.

A major relic of St Columban, patron of the Society, was brought to the centenary celebration from Bobbio in the north Italy in a silver reliquary dating from 1460.

The petitions during the Prayers of the Faithful were prayed in Irish, Mandarin, Urdu, Tagalog, Spanish, Korean, Parkari Koli, and Burmese and included the Hail Mary sung in Mandarin by six Chinese priests. 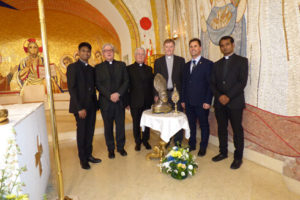 One of the chalices used at the Mass belonged to Fr Peter Leonard, a Columban missionary in China who was killed in 1929 because of hatred of the Faith.

It was found in his burnt out church and has been used for the celebration of Mass at Collegio San Colombano in Rome since 1935.

The centenary celebration continued after Mass with a reception and dinner at the Irish College. Several guests, including Vatican officials, recalled during the evening their relatives who had been Columban missionary priests or sisters.