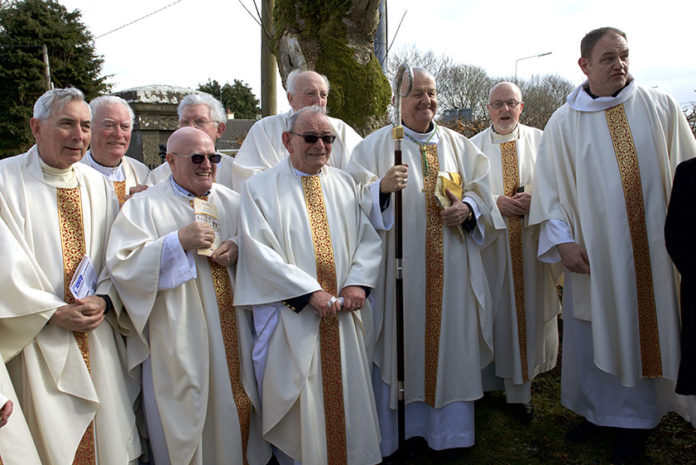 On 18 March 2018, Columbans from the Irish region travelled to Shrule parish in Co Mayo to participate in a celebration to commemorate the centenary of the founding of the Missionary Society of St Columban and the links between the parish of Shrule and the Columbans.

Shrule holds a special place in the Columban story. In 1918, Dalgan Park, Shrule, Co Mayo was leased to the newly formed Society for a house of formation. 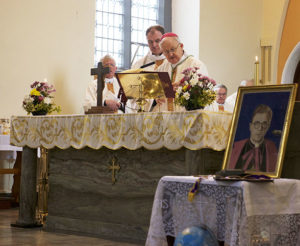 During the Society’s time in Shrule, 333 priests and brothers embraced the vision of founders, Bishop Edward Galvin and Fr John Blowick.

The celebration in Shrule marked the Columban presence in the community and the contribution of those Columban missionaries from the locality.

The day began with Mass at 12 noon. The main celebrant was Bishop Brendan Kelly of Galway and the homilist was Columban historian, Fr Neil Collins.

That was followed by the unveiling of the Columban monument, which was erected in memory of four parishioners who became Columban missionaries. 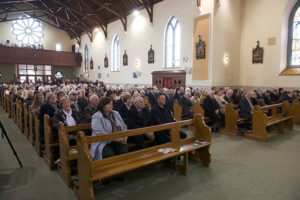 The monument also recalls the presence of the first Columban house of formation at Shrule. 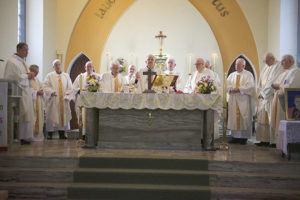 After studying at St Senan’s College, Cahiracon, Co Clare, he joined the Missionary Society of St Columban in Dalgan Park, Shrule in 1927, before going on to finish his study at the seminary at St Columban’s in Omaha, Nebraska, USA.

The then Fr Dooley went to Rome to study canon law and in 1932 he returned to Nebraska where he taught philosophy and English. 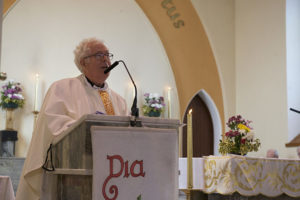 In 1936, Fr Dooley was appointed rector at St Columban’s in Rome and he was also appointed Procurator General of the Columbans that same year.

In 1950, he was named Regent of the Apostolic Delegation in Indo-China. The following year, he was appointed Archbishop and Apostolic Delegate for Vietnam, Cambodia, Laos and Thailand and was consecrated in Hanoi by the papal nuncio to the Philippines on 21 December 1951 as the titular Archbishop of Macra. 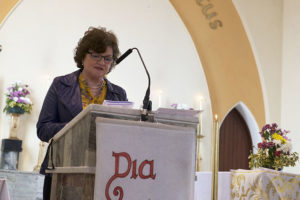 Archbishop Dooley was based at the Apostolic Delegation in Hanoi in the Cathedral compound. At this time, the First Indo-China war was being waged.

In 1954, the Communists under Ho Chi Minh defeated the French forces and took control of North Vietnam and Catholics were denied freedom to practice their religion, with the result that many fled to the south.

Archbishop Dooley decided to remain in Hanoi in the hope that his presence there would give courage to the remaining Catholics. 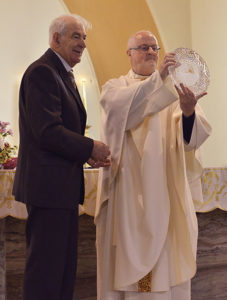 During his time there, he was subjected to harassment and was put under house arrest which greatly affected his health.

He was expelled from Vietnam in 1959.

He then journeyed to Cambodia where he received medical treatment before returning to Rome in September.

By December 1959, he had recovered enough to enable him return home to Ireland.

In April 1960, Archbishop John visited his home in Shrule where he was warmly welcomed by his neighbours and friends, and he was also accorded a civic reception in Tuam.

In 1961, he returned to Rome where he was attached to the Secretariate of State and he later took part in the Second Vatican Council. 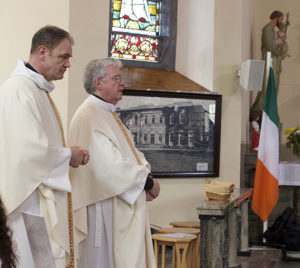 Archbishop Dooley retired to Dalgan Park, Navan, Co Meath. He celebrated the diamond jubilee of his ordination there in January 1992 and he passed to his eternal reward on 18 September 1997, aged 91.

Michel Moran was born in Glencorrib, Shrule, Co Mayo in 1901. He studied at the Christian Brothers in Ballinrobe and St Jarlath’s College Tuam.

After completing his secondary education, he went on to read Philosophy at St Senan’s College, Cahiercon, Co Clare in 1921 for two years, and he continued his study with the Society of St Columban in Dalgan Shrule. He was ordained in 1926. 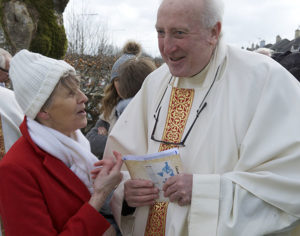 Fr Michael was assigned to China and spent most of his missionary life in Nanchang and Nanfeng, both in Jiangxi province.

In 1928, with a group of five of his classmates and led by Cornelius Tierney, he went to Kienchang, north of Nanchang.

Later that year, he took over the parish of Nanchang with his fellow Columbans, Fr Tim Leonard and Bishop Edward Sheehan. In July 1929, Fr Leonard was killed by Communist bandits.

Throughout this period, Communist bandits were very active in the Nanfeng and Kienchang areas. In late 1929, Fr Michael had another lucky escape when he fled to the hills during a Communist raid. 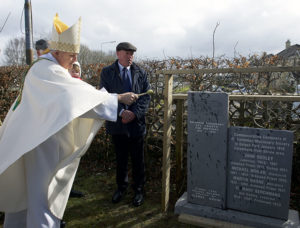 Times were hard for the missionary priests and in 1931, Fr Michael was to lose another colleague when Fr Cornelius Tierney died as a result of maltreatment while being held captive by the Communist forces.

In 1932, Fr Michael was transferred to the parish of Luki, a small town in the mountains and later to Shangtanghsu.

He was sad to leave Nanchang as the people there were kind and supportive and he was so loved by them. They would give him protection and shelter during the bandit raids.

This remained a relatively peaceful area until the outbreak of the Second Sino-Japanese War (1937) and until the end of World War II (1945). Daily life was very unsettled with bombings and refugees being continuous themes. 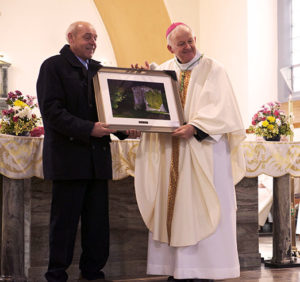 Fr Michael was appointed vice superior of the Columban mission in Nanchang and superior in 1949.

The Communists took Nanchang in May 1949 and for the initial period they treated Fr Michael amiably.

However, in December 1950, he was imprisoned and in a series of trials, was accused of a multitude of offences from exploiting the Chinese people, to amassing a fortune, to eating an orphan, and killing of two men.

During this period of detention, a fellow prisoner was taken out and shot which led Fr Michael to believe that he would suffer a similar fate.

Instead, after enduring many harrowing experiences, he was released and expelled from China in 1951. 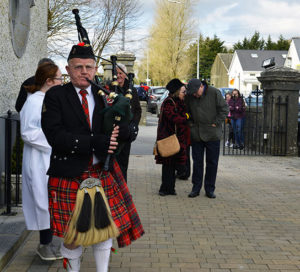 He attended Glencorrib national school and St Jarlath’s College Tuam and joined the Columbans in 1931 and studied at the Dalgan formation house in Shrule.

He was ordained there in December 1937.

Fr Martin was assigned to the Philippines and was one of ten Columbans who took charge of the Ozamiz area on the island of Mindanao.

There was a large population to administer to and many were casual in the practice of their faith, being more interested in celebrating fiestas. 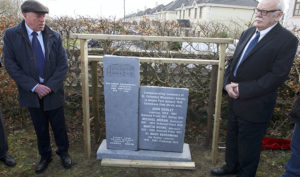 This area was peaceful until the outbreak of war.

The Japanese army invaded in 1942 and often Martin was forced to flee to the hills with his parishioners to evade capture.

He once rescued an American pilot who cash landed and later helped him to escape.

In 1946, Fr Martin returned to Ireland on leave and the following year he travelled to Perryville, USA on vocations promotion for the Columbans.

In 1951, he returned to Mindanao taking up his mission in Zamboanga for the next eight years and from 1959 to 1963, he returned home to Ireland to promote vocations for the Columbans. 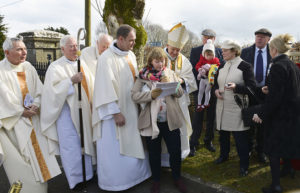 By 1963, he was back in Zamboanga where he would remain until 1978, actively preaching his mission while at the same time building three churches and several schools.

Nina Dooley was born in 1910 in Lake View, Shrule, Co Mayo. A sister of Archbishop John Dooley, she was educated in Headford and Ballinrobe.

Nina joined the Missionary Sisters of St Columban in 1927. The congregation had been established by Fr John Blowick and Lady Frances Moloney in 1922 and had its house in Cahircon, Co Clare.

Nina was professed in 1930, taking the name Sr Mary Berchmans; she took her final vows in 1933.

Sr Mary Berchmans was sent with the first group of Columban Sisters to Silver Creek, USA in December 1930.

In March 1935, she went to China and worked in Nanchang, enduring tough times during the Second Sino-Japanese war. 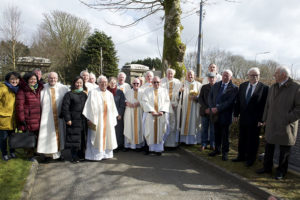 In 1948, she returned to Los Angeles in the USA in poor health, but she recovered well and was able to take charge of a number of convents and schools in the area.

In 1963, Sr Mary Berchmans was transferred back to Ireland and worked both in Ireland and Britain, being attached to the Columbans in Solihull, Birmingham.

In 1976, she took time out to nurse her sister Nan in Carraroe. Nan died later that year.

Sr Mary Berchmans retired to Magheramore, Co Wicklow and died on 10 June 2007 at the age of 97. 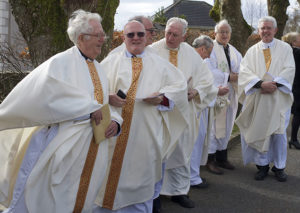