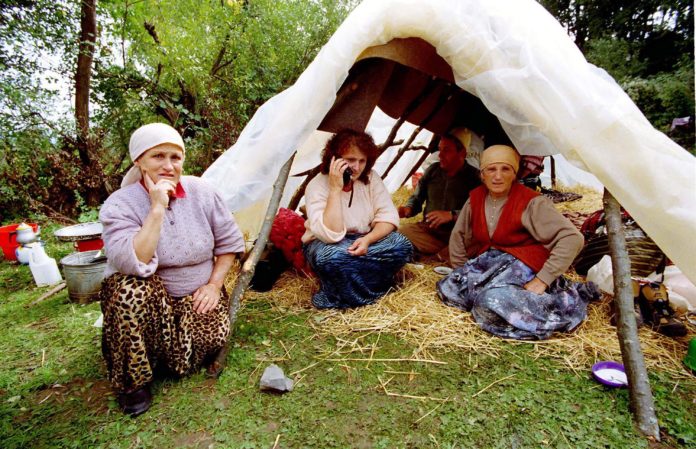 As part of the Columban Centenary celebrations, the Far East magazine invited students in Ireland aged between 15-18 to write an article on the topic ‘Migrants Are Our Neighbours’. Here, were publish the winning article by Albina Haliti.

Attention passengers. Flight 938Xh from Dublin to Pristina is now boarding, please have your passport and boarding ticket opened on the right page! These were the words my parents heard but could only barely understand before deciding to leave Ireland to go home, not knowing what to expect.

Talking about migrants is something very personal to me as only 18 years ago my parents were refugees seeking any help possible just so that they could survive.

Now I’ll take you on my family’s journey of stress and a spine-chilling story about their experience of being forced to migrate and leave their home so that they could ensure their lives. 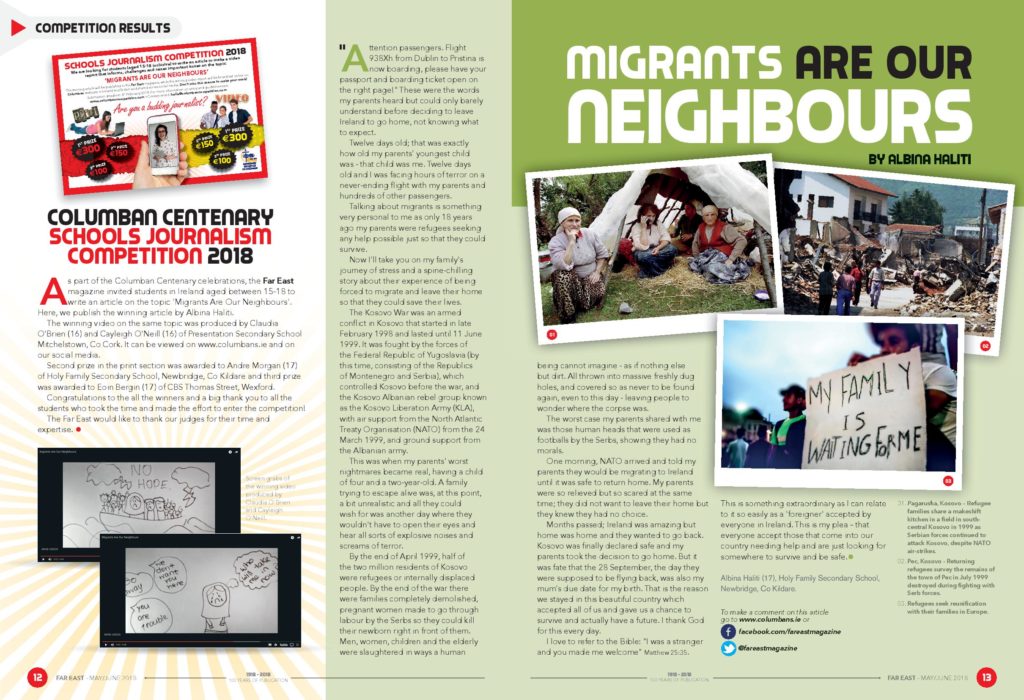 The Kosovo War was an armed conflict in Kosovo that started in late February 1998 and lasted until 11 June 1999. It was fought by the forces of the Federal Republic of Yugoslavia (by this time, consisting of the Republics of Montenegro and Serbia), which controlled Kosovo before the war, and the Kosovo Albanian rebel group known as the Kosovo Liberation Army (KLA), with air support from the North Atlantic Treaty Organisation (NATO) from the 24 March 1999, and ground support from the Albanian army.

This was when my parent’s worst nightmares became as real as anything, having a four and two-year-old. A family trying to escape alive was, at this point, a bit unrealistic and all they could wish for was another day where they wouldn’t have to open their eyes and hear all sorts of explosive noises and screams of terror.

By the end of April 1999, half of the two million residents of Kosovo were refugees or internally displaced people. By the end of the war there were families completely demolished, pregnant women made to go through labour by the Serbs so they could kill their new born right in front of them. Men, women, children and the elderly were slaughtered in ways a human being cannot imagine – as if nothing else but dirt. All thrown into massive freshly dug holes, and covered so as never to be found again, even to this day – leaving people to wonder where the corpse was. 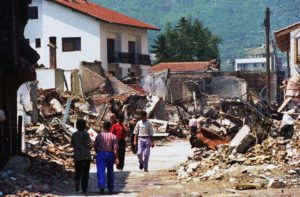 The worst case my parents shared with me was those human heads that were used as footballs by the Serbs, showing they had no morals.

One morning, NATO arrived and told my parents they would be migrating to Ireland until it was safe to return home. My parents were so relieved but so scared at the same time; they did not want to leave their home but they knew they had no choice.

Months passed; Ireland was amazing but home was home and they wanted to go back. Kosovo was finally declared safe and my parents took the decision to go home. But it was fate that the 28 September, the day they were supposed to be flying back, was also my mum’s due date for my birth. That is the reason we stayed in this beautiful country which accepted all of us and gave us a chance to survive and actually have a future. I thank God for this every day.

I love to refer to the Bible: “I was a stranger and you made me welcome” Matthew 25:35. This is something extraordinary as I can relate to it so easily as a ‘foreigner’ accepted by everyone in Ireland. This is my plea – that everyone accept those that come into our country needing help and are just looking for somewhere to survive and be safe.

The winning video on the same topic was produced by Claudia O’Brien (16) and Cayleigh O’Neill (16) of Presentation Secondary School Mitchelstown, Co Cork, can be viewed on www.columbans.ie and on our social media.

Congratulations to the all the winners and a big thank you to all the students who took the time and made the effort to enter the competition!

The Far East would like to thank our judges for their time and expertise.