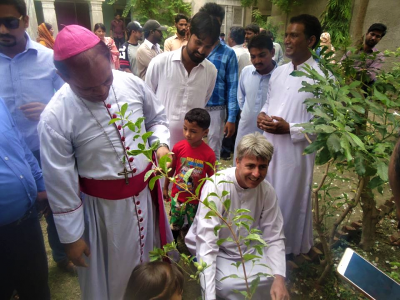 Fr Liam O’Callaghan is the Columban Justice, Peace and Integrity of Creation (JPIC) Coordinator in Pakistan. He writes about ecological work in Pakistan in the context of the Amazonia Synod of October 2019.

A Synod is a special time for the Church as People of God to walk together and share with respect and freedom on a major issue. A Synod of Bishops for the Pan-Amazon region is scheduled to meet in Rome in October 6-27, 2019 with the theme, ‘The Amazon: New paths for the Church and for integral ecology’.

Pope Francis first announced the Synod on 15 October 2017, and already numerous meetings have taken place across the region. The idea of such a Synod was born out of his 2015 environmental encyclical Laudato Sì – On Care for Our Common Home, which calls for action on global warming and pinpoints the Pan-Amazon Region as an area of vital importance. It also shows the deep concern of Pope Francis about the plight of the Amazon.

The Pan Amazon region covers nine countries – Brazil, Bolivia, Colombia, Ecuador, Guyana, Peru, Suriname, Venezuela, French Guyana and is the richest geological and most complex biosphere on the planet, containing a third of the world’s biodiversity as well as half the species that have so far been discovered. It is home to nearly three million indigenous people from 390 ethnic groups, though these groups have reduced by one-third since 1900.

The Special Synod is not confined to the Amazonian ecclesial area but will also reflect on the universal church. Likewise, while focusing on the specific Amazonian region, it will nonetheless also focus on the future of the entire planet.

Over the last three years, the Columban JPIC and inter-religious dialogue work in Pakistan has more and more focused on ecological issues, and as such can draw inspiration from the Amazonian Synod, as well as help to broaden its context through sharing our experience in a very different geographical, religious and cultural context.

There are two main foundation stones underpinning our work.

The Current Environmental Crisis in Pakistan

While the country faces many crises – poverty, rapidly expanding population, extremism and violence, unemployment, to name but a few, we are convinced that the environmental crisis is right at the top of the list. This is based on a number of factors.

According to Germanwatch Global Climate Risk Index 2019, Pakistan is listed as the eighth most vulnerable country in the world to climate change, experiencing 145 extreme weather events between 1998-2017, leading directly to the deaths of over 10,000 people.

Heatwaves – temperatures continue to rise year on year. On April 30, 2018 in Nawabshah, Sindh a temperature of 50.2 Celsius was recorded, which is a world record, namely, the first time in recorded history anywhere on Earth that in the month of April, a temperature above 50 C was recorded. 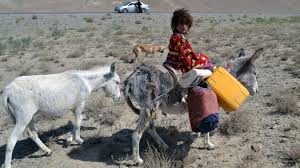 Water quality – A Supreme Court-ordered Inquiry of Commission on the water situation in Sindh in 2017 revealed that of the 336 water samples tested across 13 districts of Sindh province, 75% of them were unfit for human consumption. As well as poor quality, Pakistan is predicted to be a severely ‘water-stressed’ country by 2020 and will experience major shortfall for its population of 207 million.

Nature Journal estimates that in Pakistan each year 110,000 die as a result of air pollution.

Trees – Pakistan’s tree cover rate of 1.9% is the lowest in Asia. Experts say that 20-25% of a country’s land area should be forested as the positive impacts of forestry are fundamental to our existence.

This environmental crisis is the context in which we live here, the ‘signs of the times’, and scores of people are sick and dying every day because of it. If mission does not respond to this context, then quite simply it ceases to be relevant.

The second foundation stone for our work here is the ground-breaking 2015 Encyclical from Pope Francis: Laudato Si’: On Care for our Common Home. The tone, substance and intended audience of Laudato Si’ is quite different to anything gone before; it is not just addressed to the church only, “I wish to address every person living on the planet…and enter into a dialogue with all people about our common home” (LS 3).

This is the first encyclical to specifically focus on the environment, but it is even more than that, as one of its distinguishing qualities is the linking of environmental concerns with issues of social justice and economic equality. Francis, in no uncertain terms connects abuse of the environment with abuse of the poor. His key concept is ‘integral ecology’ connecting care for the natural world with justice for the poor and most vulnerable.

With Laudato Si’, care for creation is now firmly established as one of the cornerstones of Catholic Social Teaching (CST). Pope Francis’ biographer, Austin Ivereigh, claims that Laudato Si’ is the most significant Catholic social encyclical since Rerum Novarum and very much within that tradition.

All the main ideas which have dominated CST up to this point appear in Laudato Si’: – the common good, human dignity, subsidiarity, natural law, justice etc. Damian Howard SJ says Laudato Si’ has enormous potential to help Catholics come to see that what they are doing with and in their lives is connected to their Catholic faith and as such to help direct people towards the ‘social mission’ of the Church. Pope Francis has unapologetically set the agenda for years to come.

It sets about offering a new understanding of spirituality, that when we destroy or pollute the environment, that is a sin (LS 8) – the first time we have been taught this. It is a deeply challenging spirituality, which demands we live up to our spiritual responsibility to future generations and to the planet.

At the heart of the Pope’s reflections is the question: “What kind of world do we want to leave to those who come after us, to children who are now growing up?” (LS 160). If we want to leave behind a better world then there is a need for profound changes to political, economic, cultural and social systems, as well as to our individual lifestyles, an “ecological conversion” (LS 217).

At heart, the encyclical is an overview of the environmental crisis from a religious point of view and so the language of faith enters the discussion – clearly, decisively and systematically. Laudato Si’ is a clarion call to all people of good will to be part of this conversion experience.

The theme of change is central in Laudato Si’ and Francis gives over the final chapter to focusing on how to educate all of us, and inspired by spirituality to bring about this change. He says above all that “it is we humans who need to change” but for that change to happen “a great cultural, spiritual and educational challenge stands before us” (LS 202).

Unfortunately, in many parts of the church this focus on ecological education is very minimal and there is much to be done. If we want the world to change then change must take place within as well. Unless we change the way we think and pray, we will not change the way we act.

Columban work on raising awareness of the environmental crisis facing us has taken many forms over the last three years. Across the diocese of Hyderabad, we have held many seminars and workshops in schools and community groups. The Columbans were instrumental in getting Laudato Si’ translated into Urdu, as well as an abridged version to be used in schools and parishes. The Columban parish in Badin is also active in promoting the issue of environmental protection.

We have attempted to work from an inter-faith perspective; here also Pope Francis has led the way, as in the wake of Laudato Si’ in 2015, an awakening among all the mainline religions occurred. We have translated the Islamic statement on climate change produced in 2015. We have put emphasis on celebrating the Season of Creation (1 September – 4 October) across the diocese, by producing liturgical resources and practical suggestions for parish action.

Many of our school programmes and community events are inter-faith – Muslim, Hindu, Christian. While inter-faith work is not always easy in Pakistan, the task of working together to protect ‘our common home’ is one that can quite easily bring people together and so help break down misunderstandings.

In the last year, we have begun to focus on training environmental activists in three schools and two community groups; we have named them Mahool Dost (Friends of the Earth). The idea is to work in more depth with fewer people, so that they will in turn become active in their communities and become agents of change in their families and wider community.

We journey with 50 students and three teachers in each school, and both of the 25-member community groups for a year, with training sessions on the current environmental issues and creating together practical events such as community seminars, tree plantation, celebrating international environmental days.

There is a worldwide movement underway, an awakening at last to the seriousness of the environmental crisis at hand. One example is the school strikes for climate began by teenager Greta Thunberg, #FridaysforFuture.

The Columbans and the Church in general must be part of this movement; it is clearly where mission is called to be today. The future of the planet and humanity depends on it.