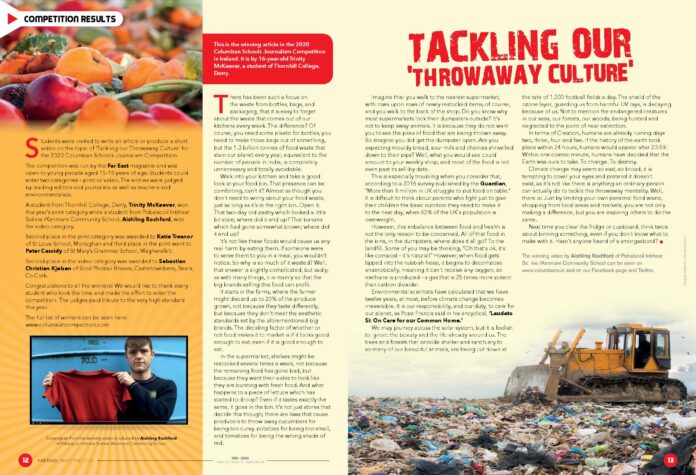 This is the winning article in the 2020 Columban Schools Journalism Competition in Ireland. It is by 16-year-old Trinity McKeever, a student of Thornhill College, Derry.

There has been such a focus on the waste from bottles, bags, and packaging, that it is easy to forget about the waste that comes out of our kitchens every week. The difference? Of course, you need some plastic for bottles, you need to make those bags out of something, but the 1.3 billion tonnes of food waste that stain our planet every year, equivalent to the number of people in India, is completely unnecessary and totally avoidable.

Walk into your kitchen and take a good look at your food bin. That presence can be comforting, can’t it? Almost as though you don’t need to worry about your food waste, just as long as it’s in the right bin. Open it. That two-day old pastry which looked a little bit stale; where did it end up? That banana which had gone somewhat brown; where did it end up?

It’s not like these foods would cause us any real harm by eating them. If someone were to serve them to you in a meal, you wouldn’t notice. So why is so much of it wasted? Well, that answer is slightly complicated, but sadly, as with many things, it is mainly so that the big brands selling this food can profit. 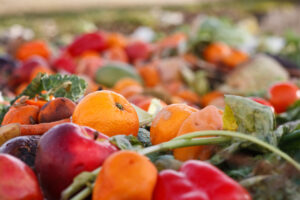 In the supermarket, shelves might be restocked several times a week, not because the remaining food has gone bad, but because they want their aisles to look like they are bursting with fresh food. And what happens to a piece of lettuce which has started to droop? Even if it tastes exactly the same, it goes in the bin. It’s not just stores that decide this though; there are laws that cause producers to throw away cucumbers for being too curvy, potatoes for being too small, and tomatoes for being the wrong shade of red.

Imagine this: you walk to the nearest supermarket, with rows upon rows of newly restocked items, of course, and you walk to the back of the shop. Do you know why most supermarkets lock their dumpsters outside? It’s not to keep away animals. It is because they do not want you to see the piles of food that are being thrown away. So imagine you did get the dumpster open. Are you expecting mouldy bread, sour milk and cherries shrivelled down to their pips? Well, what you would see could amount to your weekly shop, and most of the food is not even past its sell-by date.

This is especially troubling when you consider that, according to a 2016 survey published by the Guardian, “More than 8 million in UK struggle to put food on table.” It is difficult to think about parents who fight just to give their children the basic nutrition they need to make it to the next day, when 62% of the UK’s population is overweight.

However, this imbalance between food and health is not the only reason to be concerned. All of that food in the bins, in the dumpsters, where does it all go? To the landfill. Some of you may be thinking, “Oh that’s ok, it’s like compost – it’s natural!” However, when food gets tipped into the rubbish heap, it begins to decompose anaerobically, meaning it can’t receive any oxygen, so methane is produced – a gas that is 25 times more potent than carbon dioxide!

Environmental scientists have calculated that we have twelve years, at most, before climate change becomes irreversible. It is our responsibility, and our duty, to care for our planet, as Pope Francis said in his encyclical, ‘Laudato Si: On Care for our Common Home.’ 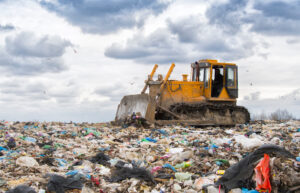 We may journey across the solar system, but it is foolish to ignore the beauty and the life already around us. The trees and forests that provide shelter and sanctuary to so many of our beautiful animals, are being cut down at the rate of 1,000 football fields a day. The shield of the ozone layer, guarding us from harmful UV rays, is decaying because of us. Not to mention the endangered creatures in our seas, our forests, our woods, being hunted and neglected to the point of near extinction.

In terms of Creation, humans are already ruining days two, three, four and five. If the history of the earth took place within 24 hours, humans would appear after 23:59. Within one cosmic minute, humans have decided that the Earth was ours to take. To change. To destroy.

Climate change may seem so vast, so broad, it is tempting to cover your eyes and pretend it doesn’t exist, as it’s not like there is anything an ordinary person can actually do to tackle this throwaway mentality. Well, there is! Just by limiting your own personal food waste, shopping from local areas and markets, you are not only making a difference, but you are inspiring others to do the same.

Next time you clear the fridge or cupboard, think twice about binning something, even if you don’t know what to make with it. Hasn’t anyone heard of a smorgasbord?