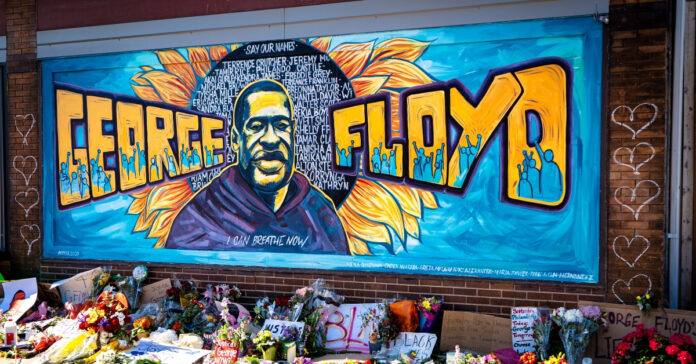 On 25 May 2020, George Floyd, a 46-year-old African American father of two daughters, was stopped by police officers in Minneapolis and cruelly pinned to the ground. A police officer’s knee continued to pressure his neck for a period of eight minutes, even as he cried out: “I can’t breathe!” He died shortly after.

Only a few weeks before, another video was released that showed Ahmaud Arbery, a 25-year-old African American man jogging in his neighbourhood in Brunswick, Georgia, followed, then shot and killed at close range by a former police detective and his son. He died on 23 February 2020, but no one knew, until the video appeared.

The US Region of the Missionary Society of St Columban stands with the victims and their families in condemning such wanton and cruel violence against unarmed African Americans.

There is no place for violence in our nation, especially violence by white police officers against African Americans, or for the systemic racism that fuels it.

As Catholic missionaries, who have a history of working in cross-cultural settings in fifteen countries around the world, we have witnessed police and military violence against poor and racially oppressed communities, and we have exercised our Christian duty to stand with the victims and their families and to speak out and non-violently resist the violence directed against them.

As Christians, we are deeply saddened at the deaths of George Floyd, Ahmaud Arbery, and countless other African Americans who have died at the hands of white police officers or white vigilantes. We profess our faith in a God of love, and no one is excluded from that circle of love, even those who commit such evil acts and espouse such hateful words. But we refuse to be silent in the face of the growing racism and violence that is targeting our African American sisters and brothers. Our Christian faith compels us.

These killings display a wanton disregard for human life, and specifically, the lives of African Americans, particularly at the hands of white police officers. In addition, they reveal a disturbing pattern of abuse and institutional racism against black Americans and a complete lack of accountability and cover-up by law enforcement officers who are sworn to serve and protect all citizens but denying those very rights and protections to African Americans.

These killings display a pattern of silence and unwillingness by white Americans to end the grave injustice of racism. Racism is not only morally wrong; it is deeply sinful.

The divisive rhetoric and threats of violence displayed by our nation’s political leaders reveal an unfortunate and condemnable lack of integrity and compassion. Such divisive words and calls for violence have only empowered racist acts of violence against African Americans and other minority communities, including immigrants, Native Americans, Latinos, Muslims, and Jews.

Fifty years ago, after three years of racial riots in 23 cities across the nation, President Lyndon Johnson formed a task force known as the Kerner Commission to address the racial violence. The commission pointed to the deep roots of systemic racism in our country as the root cause of the violence and concluded: “Our nation is moving toward two societies – one black, one white – separate and unequal.”

Today, fifty years later, we are still struggling with our failures as a nation to ensure equal opportunities and equal justice to all, particularly for African Americans. The pandemic has made very clear the deep divisions, systemic racism, and gross inequality in our society. We cannot go back to where we were before.

The Kerner Commission got it right – “Race prejudice has shaped our history decisively; it now threatens to affect our future” – but nobody listened.

We need, in the words of Dr Martin Luther King, Jr, “a true revolution of values,” and a genuine commitment to eradicate institutional racism. We must work for a society in which everyone is guaranteed a living wage, dignified employment, affordable housing, educational opportunities, quality health care and environmentally safe neighbourhoods and workplaces, regardless of their race or ethnicity.

“The end,” Dr King said, “is reconciliation, the end is redemption, the end is the creation of the Beloved Community.” But we are not there, yet; far from it. Recent events have shown us all too clearly how deeply embedded racism is in our culture, and in every aspect and institution of our national life.

We still have a chance to get it right, if we have the wisdom and moral courage to “do justice, love compassionately, and walk humbly with our God” (Micah 6:8). It will not be easy, and it will mean sacrifice. That is the cost of our convictions and our vocation as Christians.

In this season of Pentecost, we pray with all people of good will that ancient Christian prayer, now with renewed passion to defend life, and with a deeper commitment to racial justice: “Come Holy Spirit, set our hearts on fire, and renew the face of the Earth!”

The Missionary Society of St Columban lives in solidarity with the poor, the marginalised, and the wounded earth. In 15 countries around the world, we work to empower people and one another.