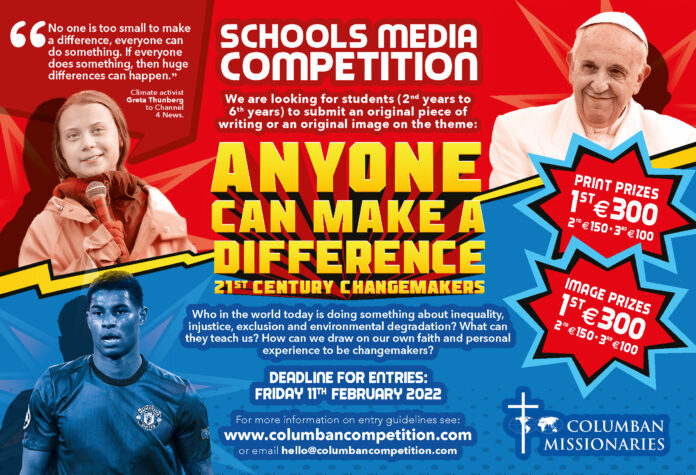 There is just two weeks to the deadline of this year’s Columban Schools Media Competition. The theme is: ‘Anyone can make a difference: 21st Century Changemakers’ and students are invited to enter an article or an image by 11 February 2022.

Young people aged 13-18 years are asked to consider: Who in the world today is doing something about inequality, injustice, exclusion and environmental degradation? What can they teach us? How can we draw on our own faith and personal experience to be changemakers?

The theme is based on a quote from young climate campaigner Greta Thunberg who has said, “no one is too small to make a difference”. She and many others internationally stand out for their mission to create a more just and sustainable world.

Pope Francis, in his World Peace Day message in January, said: “All can work together to build a more peaceful world, starting from the hearts of individuals and relationships in the family, then within society and with the environment, and all the way up to relationships between peoples and nations.”

Footballer Marcus Rashford has been called inspirational and a driver of social change for being a campaigner against racism, homelessness and child hunger in the UK. In April 2021, he received an award from the National Education Union for his work in campaigning for free school meals.

In November, thousands of young people marched through Glasgow on a Day of Action at the United Nations climate summit (COP26) to call for climate justice. Changemakers can be ordinary people who contribute to the common good, trying to make the world a more caring and healthy environment for communities everywhere.

The competition is open for writing and image entries until 11 February and winners will be announced on 11 March. Two separate competitions will be judged, one for students in Ireland and one in Britain and high-profile judges from the world of journalism have been secured. Cash prizes are offered. Winning entries will be published in Columban media and in other Catholic media.

The Columbans are giving young people a voice while encouraging their creativity and faith engagement with issues in the world today. This is the fifth annual competition for young people, with past themes looking at Migrants, Climate Change, Throwaway culture, and Racism. Last year, the competition attracted almost 300 entries from nearly 100 schools across Britain and Ireland.