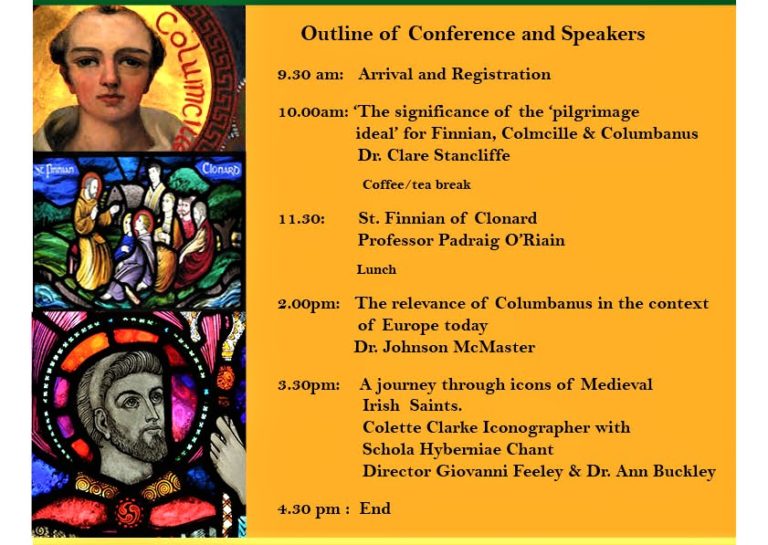 A one-day conference will take place on 28th March 2020 in Dalgan Park on the relevance of Saints Finian, Colmcille and Columbanus for Ireland and Europe today.

Conference organiser, Derry Healy, told Columbans.ie that it is part of a series of conferences which the Association Friends of St Columbanus began back in 2014.

“These conferences are to highlight the legacy of Columbanus and what he means for us today. Columbanus doesn’t stand alone in early medieval monastic history; he is part of a movement in which others have part of the story.”

He said that by “revisiting this story we can learn from that period of early Christianity and bring it into 21st century living”.

“When we talk about the pilgrim walks, and when we talk about walking in the footsteps of Columbanus, we are talking about Christian pilgrimage and we are inviting people to revisit the values of early Christianity.”

By looking at the three Saints, Derry Healy said there were a number of important values that can be gleaned from their example.

“First of all, we never walk alone, we walk together. We journey through life together. The three all formed communities and Christianity is a lived-out experience of community.”

One of the conference speakers, Dr Clare Stancliffe will address the idea of pilgrimage for Finian, Colmcille and Columbanus.

The second thing that characterises that period of history, according to Derry Healy, is the journey itself has value. 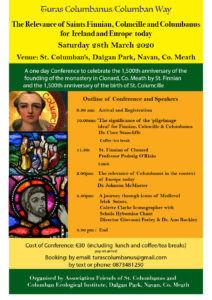 “It is not getting to the end, the journey itself has a value. While we pray ‘Thy Kingdom Come’ we engage with this planet earth which we walk. Central to this is walking gently on the planet. What we can take from that early period of Irish monasticism is how they exploited the earth but at the same time valued it, they knew it was a resource and they had to care for the earth.”

“Central to this period of monasticism, which we bring into Christianity today, is caring for the earth. They tilled the soil, they respected it, there was a cycle.”

“The third thing is the sense of celebration found in the two tables – the kitchen table and the Eucharistic table.”

“Christian celebration is about the Eucharist and it is about the community table. As Patrick Kavanagh wrote, ‘In a crumb of bread the whole mystery is.’”

“We want to highlight certain Christian values so that they become part of life in Ireland and Europe today. In a very secularised world, we don’t want to lose the sense that we don’t walk alone, we are on a journey together, as well as the sense of community, of celebration and of care for the earth.”

The conference has an ecumenical dimension with representatives from the different Churches due to attend, particularly from Bangor. Two of the speakers are Anglican. But it is also drawing in those interested in that period of medieval history and early monasticism, including a younger generation of academics.

Next August, 57 young people from the Diocese of Lodi and Piacenza in Italy will come to Ireland to take part in a Columbanus walk.

If you would like to attend the conference or to find out more about it please email: [email protected] or text/phone: 087 3481250.