Ellen Teague, along with other Columban representatives, travelled to Glasgow to participate in events focused on COP26. In this blog, she asks where the movement goes from here.

Have you ever experienced fried Macaroni Cheese or had two weeks of conversations through masks? Have you sung for a climate vigil that was broadcast globally or marched beside an indigenous woman from Brazil and a ‘polar bear’? But among my best memories of the Glasgow Climate Summit in November 2021 will be meeting a Syrian refugee family on the second day of COP26, the day the world leaders first gathered.

Security was especially tight at the conference centre so Jo Siedlecka of ICN and I were not surprised to see hundreds of police lined up as we left that evening. But we soon discovered that the local train station was blocked off and were told to walk a few hundred yards up the road and seek alternative transport. After nearly an hour of trying to secure a taxi it was clear that walking was the only option. The free Travel Passes for delegates were of no use that night. Apparently, the most powerful world leaders were being shielded while they enjoyed a banquet.

It was dark and freezing cold, and we were not alone. Hundreds of conference delegates, mostly from the global south, were also stranded in a city where we were all strangers. As we walked, guided by our phones, we passed delegates from Africa praying in a park and other sole delegates were running by us, unsure of their safety if they stood still. In fact, Glasgow is a very safe and friendly city but we didn’t yet know that. This was the first of several four-five mile walks for me in Glasgow and after the first mile I just wanted to return to London.

A man with three young children, one holding a carton of milk, was suddenly walking beside us. “Are you OK” he asked. “Not really” we answered. “My family’s flat is just over there, why don’t you come in for a cup of tea and the bathroom?” he said. We accepted his offer. The family was out late searching for milk because the local supermarket – and indeed the children’s school – had been closed for three days of COP26.

The wife and baby welcomed us at the door despite being rather shocked at the unplanned visitation during these days of Covid. We left their humble home refreshed after about 20 minutes and made it back to our accommodation, accompanied part of the way by the man and two children. But not before discovering that the couple had escaped to Scotland from Syria’s Civil War, which had destroyed their home city of Aleppo.

Their story had a link with our conference. Climate change alone cannot be blamed for the outbreak of war in Syria in 2011, but it was an amplifier and multiplier of the political crisis building up there. The country had been hit by three droughts since the 1980s and the stretch from 2006 to 2010 was recorded as the worst multiyear drought in around 900 years.

Decreased rainfall combined with rising temperatures resulted in desertification and devastation of agricultural land. Along with this, 800,000 people lost their income, 85% of the country’s livestock died and food prices doubled. Amidst the instability and conflict our new friends had to flee their native land. But they had not left behind their commitment to hospitality and welcoming strangers. 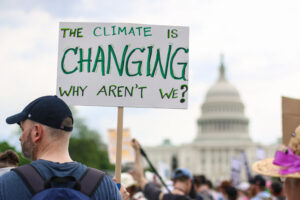 As COP26 concluded, ordinary people came to the forefront in the final plenary session. “This agreement has made some progress and we cannot afford no progress,” said the envoy from the vulnerable Marshall Islands in the Pacific. But is the change happening fast enough? Bill McKibben of the influential 350 Degrees organisation said last week: “Winning slowly, in relation to climate change, is the same as losing.”

The final document responded to the scientists’ call to close the gap towards 1.5C, and coal is in the text. But many, such as CAFOD, described COP26 as “a major disappointment”. The commitments and claims of the first week on finance, forests, end of public finance for fossil fuel, methane and cars must now be translated into real policy. Finance for loss and damage must be at the top of the agenda for COP27.

“Glasgow ends today, but the real work begins now,” said Seve Paeniu, the charismatic Finance and Climate Minister from Tuvalu. And that was picked up today by the zoom quarterly meeting of the National Justice and Peace Network (NJPN) of England and Wales. It reflected on COP26 and considered where the movement goes from here.

Personal lifestyle transformations would go alongside existing programmes to continue supporting. These would include Live Simply and Fossil Fuel divestment and making use of the trained Laudato Si Animators. Advocacy with politicians and the corporate world would be strengthened plus a push for bishops to build up the network of Justice and Peace workers who have a broad brief to address social justice, environmental justice and peace.

When the Vatican launches its Laudato Si Platform within days, the NJPN will support it. One said: “Pope Francis has used the wonderful phrase ‘I will persist in pestering’. Maybe it should become our motto on climate change and our other issues!”

The Columban Missionaries supported me to go to Glasgow and they are now heads down preparing for the next Conference of Parties – COP15 – on Biodiversity, which will be held in Kunming, China, in May 2022. This too is an issue close to the heart of Pope Francis and featured in Laudato Si’.

The Columbans have urged, “increased commitment to phasing out the extraction and burning of fossil fuels to limit global warming, a key driver of biodiversity loss.” COP26 is now over but campaigning, educating and praying for Climate Justice continues.

COP26 Blog 14: How many COPs to arrest Climate Chaos?

COP26 Blog 11: Climate solutions ‘need to be based around women’

COP26 Blog 9: ‘We are all environmentalists now’