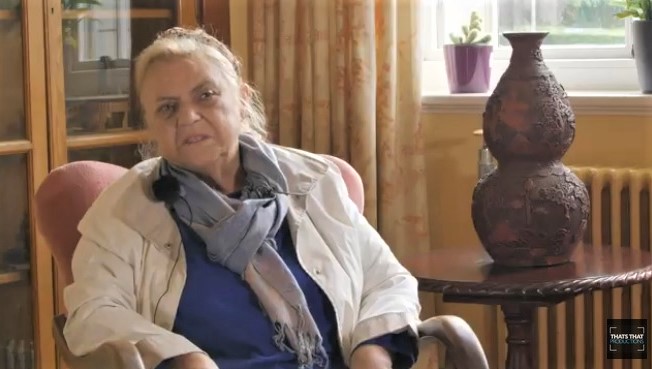 Columban documentary maker, Fr Malachy Smyth, held a special screening of his latest work with Paul Harney of ‘Thats That’ production company on the homeless and housing crisis in Ireland at Dalgan Park on Thursday.

Afterwards the showing of ‘To Wish for a Home’, Fr Malachy told Columbans.ie that the evening had incorporated a mix of video and audio material and that the audience had been “very pleased” with the lineup.

“We started with Willie Nelson and his song ‘My Grandfather’s Immigrant Eyes’ to set the mood for what was to follow,” Fr Malachy recalled.

“People were taken by Willie’s rendition. That was followed by the DVD/video piece on the housing and homeless crisis, which incorporated stories of inner city long-term homeless as well as stories about the unfolding homeless situations in Dublin, Galway and Mayo. The aim was to give a balanced picture to the viewer.”

Since most of those who attended Thursday’s event in Dalgan had not heard the Newstalk broadcast of Fr Malchy’s documentary ‘Bricks and Mortar’ on homelessness which was aired in January and at the beginning of February, a short clip of the 43 minute piece was played for them.

The radio documentary was a collaboration between Fr Malachy and Brian Kenny. The making of the programme was supported by a grant from the Missionary Society of St Columban.

Homelessness has traditionally been seen by many people as individuals sleeping rough but as the documentary showed, there can be major differences in how people are homeless.

The documentary spoke to professionals working with the charity Safety Net who explained the differences between people who are on the streets due to substance and mental health issues as opposed to people who are unable to access accommodation due to a housing shortage.

On Thursday evening, Fr Malachy also showed the audience the video he produced for the Centenary Family Day in Dalgan in July 2018. It included footage of the celebration and of ‘Old Dalgan’.

“I closed the screening with Louis Armstrong’s ‘What A Wonderful World ‘, and we had some food and wine afterwards.”

Fr Malachy said his reason for holding the screening was to keep the plight of the suffering homeless to the fore. “As Christina Noble keeps saying, the right to have a house, a little house,” he explained.

The radio documentary ‘Bricks and Mortar’ can be heard here