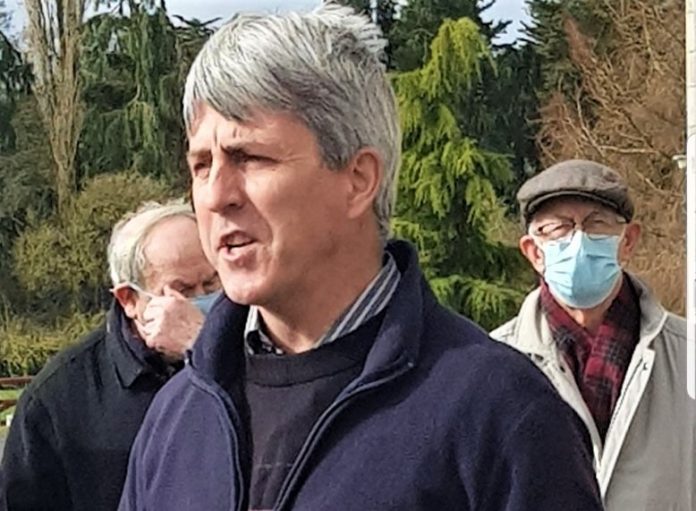 It was part of the GreenFaith Sacred People, Sacred Earth Day of Action for Climate Justice. (You can get more information on this at https://greenfaith.org/take-action/sacred-people-sacred-earth/ and here https://www.youtube.com/watch?v=xJvECom5wBA )

The day began with morning Mass in the community chapel attended by 40 Columban missionaries, adhering to Covid-19 protocols.

The Mass incorporated aspects of the Day of Action’s theme, giving thanks for the gift of creation and praying for conversion so that we may better care for our common home. 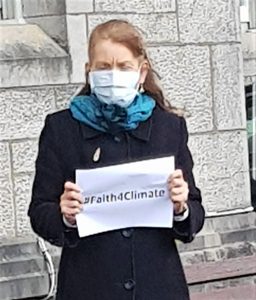 The second part of the Day of action began when the church bell struck 11am.

According to Fr Liam, the choice of 11am on 11th March was a play on ‘the eleventh hour’, trying to capture the urgency of the environmental crisis facing us and the need to act before it is too late.

Thirty-two participants took part in the one-hour activity. They were divided into four groups and attended four workshops on the topics: Prayer/spirituality; Biodiversity; Personal/lifestyle conversion; Interfaith cooperation for the environment.

The final part of the Day of Action was a signature campaign addressed to the Minister for the Environment, Eamonn Ryan, and three Meath East TDs, urging them to improve the Climate Action and Low Carbon Development (Amendment) Bill 2020, which is before the Oireachtas at the moment.

The letter outlines the Columbans’ key concerns in relation to the Bill.

In the letter, the Columbans welcome the publication of the Government’s New Climate Action Bill as an improvement on the previous Climate Bill of 2015. 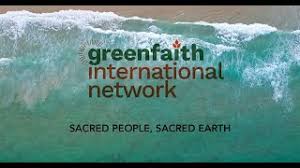 We were pleased to see the Joint Oireachtas Committee on Climate Action (JOCCA) deliver such a strong consensus report on the Climate Action Bill before Christmas.

It’s clear that members listened very carefully to the expert witnesses they heard from and worked collaboratively to produce the 78 recommendations which, if accepted, would greatly strengthen the Bill. So it was heartening to hear you say recently that “the vast majority” of the changes proposed by the Committee will be accepted by Government. 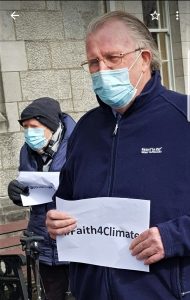 These recommended changes are clearly required, as reaction to the Bill from climate activists has been lukewarm. Maynooth University emeritus climatologist, Professor John Sweeney, described the legislation as being full of “weasel words, loopholes and get-out clauses”.

The Columbans see the devastating effects of climate change in the countries we live and work in e.g. increasingly devastating typhoons in the Philippines; bushfires in Australia and the Amazon; typhoons in Fiji and Pacific Islands; extreme heatwaves and flooding in Pakistan, to name but a few. Almost in all cases, the lives of the most vulnerable people in our societies are the worst affected.

As well as the climate crisis, the rapid loss of biodiversity – animal, plant, marine species, insects, ecosystems etc – is having devastating consequences. We believe that pandemics such as Covid-19 are one of the predictable outcomes of environmental destruction and loss of biodiversity.

On 12 December 2015, at the COP21 (Conference of the Parties 21) in Paris, the 195 participating parties agreed to the first ever universally binding accord on climate change, the Paris Agreement. In preparation for this meeting Pope Francis published an encyclical Laudato Si – Praise be to you – On the Care of Our Common Home (May 2015) which underscores the moral imperative for urgent action on climate change to protect the environment and the planet’s most vulnerable populations, and spur responsible growth.

Columban missionaries work with people of other faiths and civil society organizations calling for climate justice and the safeguarding of biodiversity. This is one of the most urgent issues facing us at this time and the window for action is rapidly closing.

The key concerns are:

The language in the Bill is weak; the JOCCA recommends that the final Bill includes and underpins this 51% commitment. The language needs to ensure commitment rather than being aspirational, in order to achieve the zero greenhouse gas emissions target by 2050.

This Bill must make the achievement of the 2050 decarbonisation target an explicit duty of either a minister or any future government. The Bill must specify that the carbon budgets must be consistent with the trajectory of emissions that will achieve the 2050 climate neutrality goal and align Ireland with our obligations under the Paris Agreement.

The Bill must have a clearly stated obligation on government to comply with these budgets. In conjunction with this, monitoring, enforcement or accountability of carbon budgets, clear and effective pathways to a just transition and remedies to address the biodiversity crisis should be outlined in the Bill.

The Bill needs to initiate a debate on the types of agriculture practiced in Ireland in relation to their environmental impact. This would be in line with last year’s IPCC special report on climate change and land, where it described plant-based diets as a “major opportunity for mitigating and adapting to climate change” which will necessitate a reduction in meat consumption.