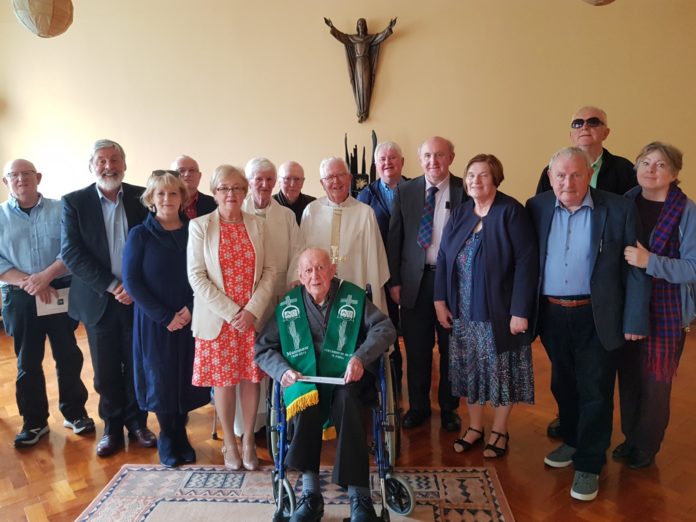 Fifty years later twelve members of his family gathered for Mass in Dalgan and remembered him with affection and thanksgiving.

One of the gifts they brought was a photograph of his immediate family. Jim, the baby, is sitting on his mother’s knee.

He was ordained in Shrule, Co Mayo on 21 December 1939 but due to World War II was unable to go to the missions.

Instead he became a curate in St Mary’s, Bolton, until his doctor diagnosed tuberculosis and advised him to rest.

When peace came the Far East magazine for September 1946 announced:

The group went to the Catholic Mission of Bhamo (Banmaw) in the Kachin State where Jim became pastor of Panghkak.

Ten years later Monsignor Patrick Usher, Columban superior, reported that he had blessed two new churches, one of them, ‘at Panghkak village, only five miles from the Chinese border. It was built by Father Fitzpatrick for his flock of slightly less than 1,000 souls. Priest and people can see every day the nearer face of the bamboo curtain’.

Panghkak was high in the hills.

To reach Bhamo, he’d have ‘a long, lonely 25 mile pony ride and walk, up and down hills, before he gets to Fr Rillstone’s place on his way here’.

Thomas Rillstone’s parish at Sinlum had an elevation of 1474 metres, 4836 feet.

More than fifty years later, Fr Davy Wall set the tone at the memorial Mass by reminiscing with members of Jim’s family.

Davy taught in Bhamo and had visited Panghkak. Nieces and nephews responded with glimpses of Jim’s home vacations, when they were small children.

In January 1967 Dan Cooney, the Columban superior, reported, ‘Here in Bhamo Fr Jim Fitzpatrick is being treated for low blood pressure. His reading is 97 over 60 which I am told is very low…. Jim wasn’t feeling well around the new year, and when he began getting pains in his right hand and palpitations he wisely made tracks for Bhamo. If you only knew how isolated Jim’s mission is, and the difficult travel involved getting in or out of it, you would realize the better just how wise Jim was’.

To make matters worse, in 1968 fighting erupted between the Burmese Army and the Kachin Independence Army.

Bishop John Howe was forced to bring Jim down to the safety of Bhamo, putting him in charge of students boarding there. For a man used to the cooler climate of the hills the heat was unbearable.

On 21 May 1969, Dan Cooney wrote that Jim had a temperature of 106, going to 107.6. The Sisters kept sponging him and got it down to 103. Fr Dan Treanor gave him the last sacraments. He died on 22 May due to heat prostration complicated by his circulatory problem. He was 55.

Dan Cooney paid a tribute, ‘He will be sorely missed, because he was a good companion, interested in everything and everyone’.

Perhaps the greatest testimony to a great missionary was the ordination of two students from Panghkak as bishops.