Home Features Finding God during our times of confinement 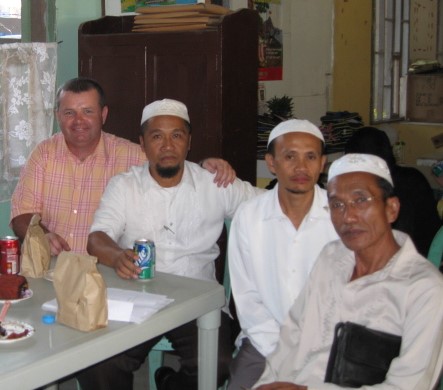 Fr Paul Glynn is the Regional Director of the Columbans in the Philippines. He has drawn on his experience of confinement some years ago when the situation was tense in the Southern Philippines to help him through the Covid-19 lockdown.

Like many other Columban missionaries before me, I have devoted many years to trying to promote harmonious relations between Christians and Muslims in the Southern Philippines; a place that has witnessed much misunderstanding and conflict between adherents of these two world religions. Our aim has always been to become a reconciling presence – a bridge between the Muslim and the Christian communities.

Since Christians and Muslims speak different Filipino languages it is necessary to be able to speak both in order to bridge these two communities. So, in 1997, having spent two years learning and practicing Binisaya, the local language of the Christians, I set to work learning Meranao, the language spoken by Muslims in the area.

By this time, I had fallen in love with the stunning tropical beauty of the Southern Mindanao landscape and used to enjoy trekking the vast mountain ranges that overlooked the expanse of the Celebes Sea that stretches out towards Indonesia and Malaysia.

When I moved to the Muslim majority town of Malabang to study and practice the Meranao language, I would continue my evening walks in the beautiful tropical countryside, listening to the call to prayer from the countless minarets, as I watched the sunset over the Southern sea. This is when I would feel particularly close to the goodness and greatness of the One we Christians call God and Muslims call Allah.

All this came to a sudden halt, however, when one day I heard someone shouting at me from behind my back, as I took my evening walk after a day of language study. It was Bebe, one of the stalwarts of the Catholic parish community on the back of a motorbike being driven by her son.

“What do you think you are doing Father? Come home at once!”, she shouted. “Why?” I said. “I’m having my evening walk. What is wrong with that?” “Have you not heard that the kidnap-for-ransom gangs are at it again?” she warned. “They are starting to kidnap local businessmen. You are a foreigner. You will be next. Get back home and stop your nonsense!” “But what about my daily walk, Bebe? I need the exercise and I need it for my sanity after a day of studying language”, I pleaded. To which she retorted: “There’ll be no need for language or for your sanity for that matter, if you are killed”.

“You can do your exercise in the school yard”, she insisted. The yard of the parish school was about the size of three basketball courts and was surrounded by a high wire fence for security purposes. That was to be the extent of my world for the next four months, or so, as Bebe was determined that I wasn’t going to be kidnapped, despite all my protestations. “You priests preach to us about sacrifice; now is your time to put it into practice”, she would remind me, and I had no answer that could match that! 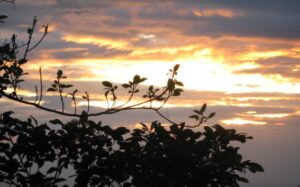 Peering through the wire fence as I briskly walked in circles around the small concrete yard each evening for my exercise, I used to feel as if I was in prison – even solitary confinement – as, with all the schoolchildren gone home, I would be pacing that small concrete world on my own. I remember that in order to avoid the notion that I was in a prison, I would focus on the lone star apple tree that I could see through the wire fence and imagine that I was walking in the countryside.

Then I would stop to watch the sky turn red through the leaves of the star apple tree, as the sun set somewhere in the hidden horizon and I would often try to imagine that I was on a mountain top overlooking the Celebes Sea.

Somehow, at that moment, my tiny world would grow much larger. And when I prayed, I would often be reminded of St John of the Cross when he was imprisoned in a pitch-black cell for a long period of time; and that what gave him strength to survive was whenever he would focus on the tiny chink of light that came into his cell each day.

For him, that was the abiding presence of God in the midst of all his darkness and suffering. And Bebe was right all along: the discomfort of not being able to go for my daily walk was a very small ‘sacrifice’ to have to put up with compared to what John of the Cross had to face and compared to the hardship and suffering so many people in the Southern Philippines had to endure every day due to poverty and war.

It is now 2020 and the daily increase in the number of Covid-19 cases here in Manila means that we have little choice but to remain inside the compound of the Columban Missionaries’ Regional House. We are so lucky compared to most people here; the garden space inside our four walls is more than 20 basketball courts!

Many families here have to make do with being locked down in houses one-twentieth the size of a basketball court. After six months of this ‘lockdown’ we all yearn to be able to get out and about. I yearn to be able to walk again in the countryside and maybe even stroll by the sea or climb a mountain. But even though we are in the middle of the concrete jungle that is Manila we have about a dozen trees.

As I walk the circuit of our compound each evening and as I listen to the sounds of the birds and insects that have come to stay in Manila due to the reduction in pollution that the decline in traffic from Covid-19 has brought about, I look intently and lovingly at the branches and the various shades of green of the leaves on our selection of trees and at once, our little compound is transformed into a vast world of wilderness and beauty.

And as I ponder the sunset through the mass of glistening leaves of our enormous banyan tree I am drawn once again to the God of Christians, the God of Muslims and the Light of the World Who never abandoned John of the Cross in his time of total isolation.