One hundred years ago the first Columbans arrived in China. Fr Neil Collins recalls the challenges they faced in places like Hanyang – “a city of no Catholics”.

“Didn’t this luggage belong to the Irish missionaries to China?” asked a dock worker in Liverpool. Fr Edward Galvin claimed the bags, his own and those of his ten companions.

“Then we’ll take no money from you, Father. Give us your blessing and shake hands.” The eleven Columbans boarded the RMS Carmania on 27 March 1920 bound for New York, en route to Shanghai. Priests from Liverpool, Birmingham, Manchester and Leeds came to wish them God-speed. The Carmania arrived in New York on Good Friday.

Edward J Galvin was already a veteran missionary, having arrived in Hangzhou, in the Province of Zhejiang, China in April 1912. He went there “for Christ’s sake to save souls that are dearer to him than all the world”. It was a mammoth challenge. The Vicariate of Western Zhejiang that he joined was under the care of French Vincentians.

Pat O’Reilly and Joe O’Leary joined him just before Christmas 1915. The colourful O’Reilly, ordained in 1906, was curate in Tang, Co Westmeath, where he was responsible for setting up a very efficient branch of the Gaelic League and a company of Irish Volunteers for whom he secured seven or eight Howth Mauser rifles. These activities led his bishop, Laurence Gaughran, “to get into his horse and carriage and drive down to Tang to advise him to go to China with Galvin or end up in Kilmainham jail.”

He opted for China, travelling to Shanghai with the newly ordained O’Leary, who wrote to a friend how they “stood there on the pier, unknown and unnoticed. We could not understand or be understood. We found no trace of Father Galvin, not even one face of a single European.”

Meanwhile Galvin searched for them and spotted them with the help of a policeman. He had a black beard, a hat and a dark soutane. When he addressed them, in French, O’Reilly tried to respond. “As fine a brand of Maynooth French as ever I heard. I’m Galvin, you Arabs.” He brought them to the Vincentian central house where they spent a very pleasant week giving Galvin such good news about the enthusiasm for mission in Ireland that he became “intoxicated and unable to do any serious work. Add to that the fact that O’Leary has kept me in a continual roar of laughter since his arrival.”

But they shocked him when they said, “You have started a great movement. There can be an Irish mission society, but you are the key. You must go home and put before the bishops and priests of Ireland the necessity and feasibility of such a mission.”

The Vincentian authorities gave them their assignments. O’Reilly joined Galvin in Quzhou while O’Leary went one hundred and fifty miles away to Jiaxing with an Italian parish priest. Despite the distance the two new arrivals continued the argument with Galvin and persuaded him to go home.

Galvin sailed from Shanghai on 16 June 1916, promoted the idea of an Irish mission as he crossed the US, and arrived in Dublin in late August. One of O’Leary’s correspondents, Fr Thomas Ronayne, welcomed him with the news that John Blowick, Professor of Theology in St Patrick’s College, Maynooth, had almost decided to join the project.

They met at 16 Longford Terrace, Monkstown, Dublin, home of Ronayne’s mother on 4 September and talked until dawn was breaking. Two days later Galvin wrote to O’Leary, “Blowick has fully decided to resign his chair and take the lead.”

According to the Code of Canon Law of 1917 only a bishop has the power to found a religious society and he must consult the Holy See. As a priest of the Diocese of Cork Galvin approached his bishop, Dr Daniel Cohalan who sent him to Cardinal Michael Logue, Archbishop of Armagh.

They were invited to a meeting of the Irish bishops on 10 October 1916 who approved the project for “young Irish ecclesiastics to go forth and carry the light of the Gospel to the Chinese”. The cardinal forwarded the decision to the Vatican through Michael O’Riordan, Rector of the Irish College in Rome.

Having gained the approval of the bishops Galvin and Blowick began recruiting. Edward J. McCarthy, John Henaghan and James Conway joined them. Priests from Maynooth and every diocese in Ireland helped in preaching about the mission up and down the country.

By May 1917 Galvin wrote to O’Leary that they’d have £40,000 by the end of the year. Seventeen priests and twelve students had volunteered. Then a crisis threatened.

In May 1917 O’Riordan sent a message to Blowick, “Come out [to Rome] and come quickly”. Blowick later discovered that someone had reported to Rome that the new mission was merely an excuse for priests who didn’t want to serve as chaplains in the British army. “They said we weren’t genuine missionaries at all. We were a bunch of Sinn Féiners who were providing a decent front for priests that didn’t want to go to the army.”

Vatican officials appear to have believed that the Sinn Féin party in Ireland was the same as the Bolshevists in Russia, and, when Blowick and Galvin arrived in Rome on 12 July 1917, greeted them with the cry, “Bolscevici”. With the help of O’Riordan and the letters of Cardinal Logue the two young priests convinced Rome that the project was bona fide. Pope Benedict XV gave them his approval.

In October 1917 Galvin and Blowick inspected an old Georgian building with a large farm, Dalgan Park, near Shrule, Co Mayo. They leased the property in December and the first students arrived on 29 January 1918.

By 21 January 1918 Joe O’Leary was in San Francisco promoting the Irish Mission to China “seeing as many priests as I can and talking China all over”. He wrote to E J McCarthy to send the Far East to every bishop. Michael Mee, from Carrickmacross, Co Monaghan went to St John’s College, Waterford, where he was ordained in 1910 for the diocese of Alton, Illinois. He worked in that diocese until he joined the Society.

Priests continued to join in Ireland. The oldest at forty-five, Cornelius Tierney, had been “haunted by the thought that he should volunteer for the Chinese Mission”.

The German Spring Offensive in 1918 put such severe strain on the allied armies that Lloyd George, the British prime minister, decided to extend conscription to Ireland. John Blowick was in Maynooth on 18 April 1918 where the bishops were meeting to discuss the question of conscription. When he found that they were going to hold ordinations on 28 April he decided to have Columban students ordained too.

Alphonsus Ferguson, Joe Mullen, John O’Donovan, Alphonsus Kerr and William O’Flynn became priests. On 17th September 1918 six Columbans sailed to the US. Three of them, Michael McHugh, Richard Ranaghan, and Alphonsus Ferguson, would be in the first batch for China.

Thomas O’Dea, Bishop of Galway erected the Maynooth Mission to China as a Diocesan Society on 29 June 1918 with Dalgan as its headquarters. The new society had twenty-two members, seventeen in Ireland, four in the United States, and only one, Pat O’Reilly, in China. 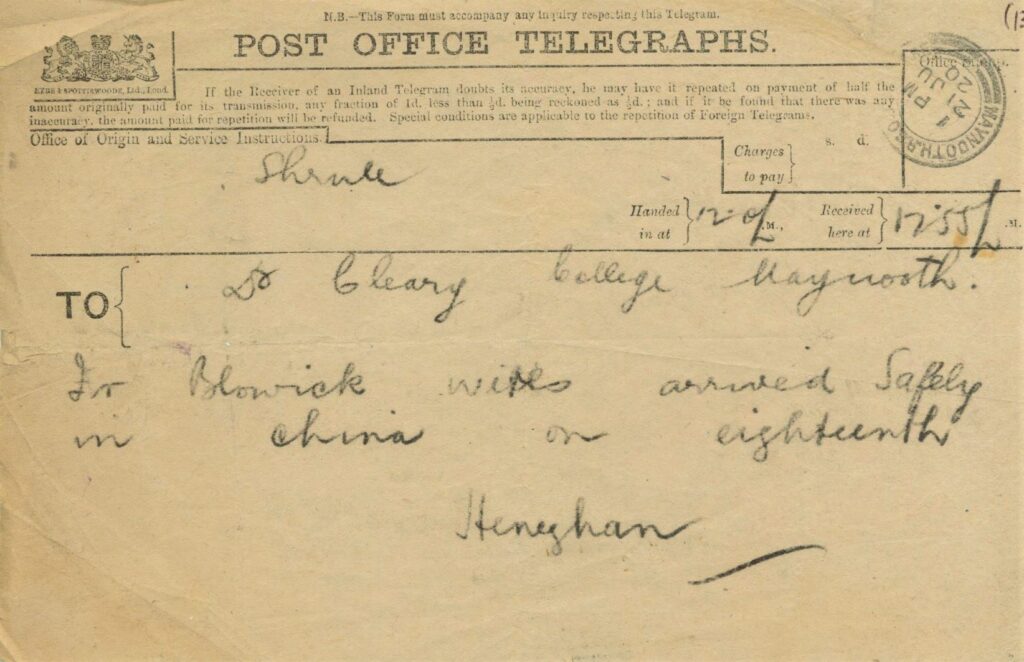 Three students, John O’Brien, Art McGuinness, and Tom Quinlan were ordained to the priesthood in St Columban’s on 2 February 1920. They were among the eleven who sailed for New York on the RMS Carmania on 27 April 1920.

Blowick, Galvin, and Owen MacPolin went ahead to China while the others scattered widely to promote the mission. A group of Chinese Catholics and an Irish Marist Brother, Faust Digman, welcomed the three to Shanghai on 16 June 1920. Ten days later they reached Hankou. Franciscan Fr Covi met them and offered them the hospitality of the Franciscan friary.

On Monday he brought them across the Han River to the city of Hanyang. “It is sadly,” he said, “a city of no Catholics.” The following day a visitor, Dr Francis Kung, a Catholic, told them of some European style houses, property of the Hanyang Iron and Steel Works, that were for rent. The Columbans looked at them and rented them and immediately cabled EJ McCarthy in the US to send the young priests.

Blowick left Hanyang with a very heavy heart on the evening of 2 August 1920. In the growing darkness he looked back at the white-clad Galvin and MacPolin until he could see them no longer. He was bound for Australia, Rome, and Ireland. 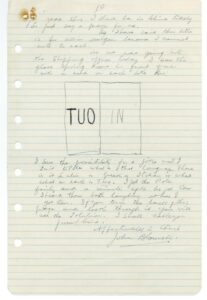 Eleven members of the team arrived on 21 August – Michael Mee and John Dawson were delayed until the New Year. The first weeks were devoted to the study of Chinese. “We are ding-dong at the language” wrote Cornelius Tierney.

“We shall soon begin on Catechism, rather late in life for some of us to be learning the elements! But it must be memorized in order to meet the Catechumens.” In January Galvin moved them out to parishes. Tierney and William O’Flynn went to Shinti, 130 miles from Hanyang. Only 160 of its 50,000 people were Catholic.

It was an extremely demanding life – ill health forced Arthur McGuinness and Michael Mee to leave China in 1922. Tim Leonard and Cornelius Tierney were killed by communist bandits. Others were recalled to teach in seminaries. Edward J O’Doherty was elected to the Superior General’s council, based in Ireland. Owen MacPolin and Thomas Quinlan were transferred to a new Mission in Korea.

Galvin Became Bishop of Hanyang and Quinlan Bishop of Chunchon. The Communist government expelled Galvin in 1952 and Joseph Crossan in the following year.