On St Columban’s Day, Fr Felisiano Fatu became Vice Director of the Columban Region of Oceania and effectively took charge of Fiji. This is a major event for the Society.

After 70 years of Irish, Australian, New Zealand and American leaders, the leadership passes for the first time to a local Pacifican. This is an event of major importance for the Society of St Columban and for Fiji.

Fr Felisiano was born in Hihifo, Niuatoputapu, Tonga on 9th June 1974. He grew up in Matahau, Tongatapu and went to St John’s High School and ‘Apifo’ou College run by the Marist Fathers in Ma’ufanga. In 1994 he joined the Columbans, one year after his uncle, Fr Palenapa Tavo who now works in Lima, Peru.

He studied at the Pacific Regional Seminary in Suva from 1994-1997 and then did his Spiritual Year, the Columban equivalent to a Novitiate, in Manila from 1998-1999. He had his First Mission Assignment (FMA) in Lima, Peru from 1999-2001. All Columban seminarians are asked to do this for two years before ordination. During this time, he had to learn and function in Spanish. 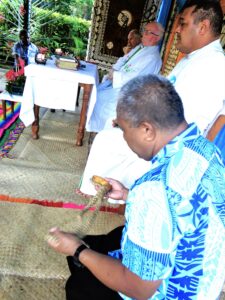 Next, he completed his theological studies at the Catholic Theological Union (CTU) in Chicago from 2001-2002. He was ordained a deacon in Chicago and then, after 13 months pastoral work as a deacon at Our Lady of Perpetual Help parish in Lautoka, Fiji, he was ordained by Bishop Foliaki SM in the Tongan Cathedral, at Ma’ufanga, Tonga on 4th December 2003.

After ordination, Fr Felisiano was missioned to Pakistan where he spent the next years. He first had to study Urdu in Murree, a mountain town in the foothills of the Himalayas. He then worked in the parish of Badin in Pakistan from 2005 to 2011.

After doing a formation course at the Marymount Mercy Centre at Castle Hills in Sydney and CTU Chicago, he was appointed to take care of the Columban students in Suva and eventually became rector, (2012-2016). The Columbans had meanwhile closed Chicago as a formation centre and decided that all Columban seminarians should be educated in Manila.

Fr Felisiano was asked to go to Manila with the Suva Seminarians and in 2016 they travelled together to the Philippines. He became rector of the Columban Formation House in Manila until 2020. He was then appointed to the Region of Oceania, namely Fiji, New Zealand and Australia, now amalgamated into one region. 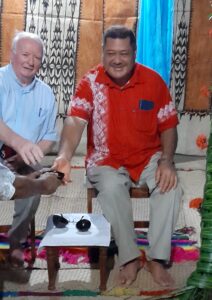 He was also appointed to study for a Masters in Spiritual Direction in the Ignatian tradition at the University of Divinity in Melbourne and then completed it at the Australian Catholic University (ACU) also in Melbourne.

With the onset of Covid, travel was impossible and so he had to do his study online. He started his degree in Manila but was then able to get as far as Fiji where he completed his degree in Suva in 2022.

The resident Country Leader and former Director of Fiji was Fr John McEvoy. His term came to an end on St Columban’s Day 2022 and, at 77, Fr John was more than ready to step down. By a happy providence Fr Felisiano happened to be in Fiji and so was able to take up leadership at this time.

He is ably assisted by Fr Carlo Jung of Korea who is parish Priest of Labasa on the Northern Island of Vanua Levu. These two Columbans form the Fijian members of the five-member leadership team of Oceania that took over on 23rd November.

The new Regional Director is Fr Peter O’Neill who is assisted in Australia by Rev Dr Patrick McInerney and the New Zealand counsellor is Fr Tom Rouse, former director of Fiji.

We ask your prayers for Fr Felisiano and the others on this new leadership team as they carry the charism of the Society of St Columban forward.

History was made on the 23rd November 2022 when leadership of the Columbans in Fiji passed from Caucasian Columbans to Columbans from the Pacific and Asia. Fr John McEvoy completed his three-year term of office as Vice-Director of the Columban Region of Oceania and in his place Fr Felisiano Fatu became the new Vice-Director.

At the beginning of Mass this evening in the Columban Centre House in Suva, catechist and former Columban co-worker Leone Ratadamu offered a tabua (whale’s tooth) on behalf of all the past Caucasian Columban leaders asking pardon for their mistakes and failings.

The tabua was received graciously by Fr William Lee who thanked them for the service and missionary leadership they had given for many years. The phrase that struck me most was his calling it “veisau na mata ni cagi” (change in the direction of the wind). 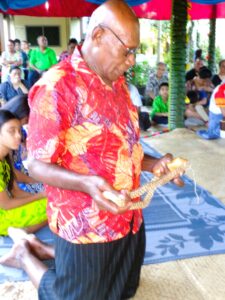 They will be helped in the future by special missionary formation and will work actively side by side with Columban priests and lay missionaries in the missionary work of the Society. Some examples of this are: interreligious dialogue, vocation promotion, spreading and strengthening Small Christian Communities.

After the Eucharist of thanksgiving those present socialized with yaqona and a shared meal. We ask for prayers for the new leadership of the Columbans in Fiji and for the synodal approach to Columban mission in the future.