On Christmas Eve, the residents of Misamis Occidental were waiting for midnight to celebrate Christmas. As they waited, they were surprised when water started to spill into their houses. Little did they realise that in a few hours their lives would be changed forever, write Virgenia O. Vidad and Columban missionary Fr Oliver McCrossan.

According to the people I spoke to, the typhoon dumped a huge amount of rain in the mountains above the village causing a flash flood and the river overflowed its banks. Landslides of huge boulders, logs and uprooted trees slid down the mountainside and destroyed everything in their paths.

A total of 800 families are currently taking refuge in evacuation areas. The death toll is not yet clear as rescuers are still recovering the missing. Many lost members of their families, homes and all their possessions in the flood. Many are traumatised by the horrific experience including small children who have lost parents and siblings. Families have horrific stories to tell. At the moment they are being housed in temporary tents and in the village hall.

Columban Missionaries have served the people here in the parish of Jimenez, Tudela, Ozamiz City, Plaridel, Oroquita, Sinacaban and other neighbouring parishes in many years. The area is near Mt Malindang. It was a protected area, but loggers have been destroying the mountain by cutting down trees and quarrying. The people’s livelihood is agriculture – the growing of bananas, coconuts and corn.

The major reason of the calamity is the lack of forest cover and the continued quarrying which involves cutting down trees, without any replanting of new trees.

While many lives have been lost and thousands are homeless, there has also been huge damage to crops and people’s livelihoods. Typhoons are more common now and more severe than before. We are experiencing the effects of climate change.

The government services are doing what they can with limited resources. Help is still needed. Housing materials, food, clothes and farm implements are in short supply.

Virgie Vidad is from Ozamiz City. She rune the Pedalling to Live and Green Shelter projects which were set up in 2006 by Columban Fr Oliver McCrossan.

Update from Fr Vincent Busch on the Subanen Crafters 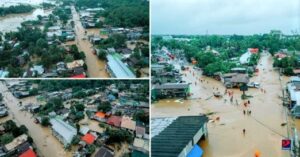 The crafters and I are safe and well. We survived a province-wide flood event that began on Christmas day. All 15 towns and cities on our 100-kilometre coastline are under mud and water due to incessant monsoon rains that cascaded down Mount Malindang between 25-28 December.

Farm animals, bridges, roads, and houses have been washed away and electricity is out in many places. We have electricity here in Ozamiz although there are frequent outages. I even have TV cable where the international news stations were simultaneously showing the paralyzing blizzard in my home area near Buffalo, New York. Many deaths in both our places. I hope the New Year is more kind to them and us.

After a two-year pause during the Covid epidemic, the Subanen Crafters resumed our yearly reunion. That get-together was on 21st Dec in a local high school gym. We had the usual good food and lots of games. One of the activities of the gathering was a spoof on the beauty pageant craze that possesses the Filipino psyche. In our spoof five crafters dressed themselves in pageant ‘gowns’ using toilet paper.

The apparent youth of the crafters in the above photo is not what is seems. Mayet, the woman next to me, looks 15 but she is a mother in her thirties. However, 39-year-old Marcelita, (here seen with her daughter Helen) looks older than her years.

Marcelita has had serious family problems and has become depressed and disoriented. We recently got her a medical check-up and found that she has TB. The crafters are making sure that she takes her pills and vitamins, and that she has healthy food. We will do our best to make her troubled life more liveable.

The Subanen artists are already making cards for next Christmas. As usual we have put a lot of thought into our designs. We will feature how Mary and Joseph taking care of each other during their desert journey to escape Herod’s soldiers.

In this card they are seen hiking to that green oasis in the distance where they will shelter for the night. Joseph is carrying their belongings in a Subanen-style basket while Mary carries Jesus in a sling, just like a Subanen mother would. We clothed them in stars and placed them within our Solar System so as to see them and ourselves sharing life on the Earthly oasis we all share.