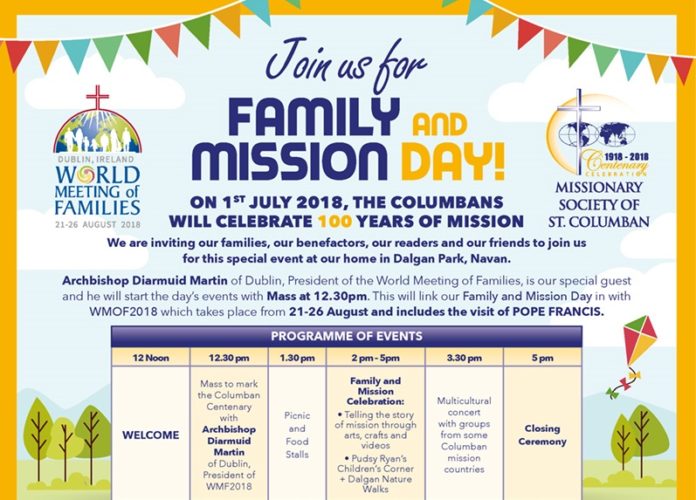 In recognition of the many blessings the Missionary Society of St Columban have received from God, from families, and from benefactors, a ‘Family and Mission Day’ will take place at the Dalgan Park on 1st July 2018. Fr Cyril Lovett of the Columban Regional Council talks about what is planned and the reason for the event.

Q – The Family and Mission Day begins with Mass at 12.30pm and the president of the ninth World Meetings of Families (WMOF2018), Archbishop Diarmuid Martin, will lead the liturgy and Columban priests will concelebrate with him.

A – We are very grateful to Archbishop Martin for agreeing to be the chief concelebrant at this Mass. We are conscious that the theme of the day – Family and Mission – ties it in with Pope Francis’ theme of families for the World Meeting of Families in August.

Q – You often see families out strolling in the beautiful grounds of Dalgan. It is a wonderful nature reserve. Are you inviting people to bring picnics with them or will they be able to get food here on the day?

A – There are two options. People are most welcome to bring along their picnics along with them but if they prefer we can offer a simple meal for something like €5 – so everybody will be able to eat and will have something to eat. That takes place at 1.30pm after the Mass is over.

Q – Why are you having this celebration on 1st July?

A – First of all, it is a celebration of our centenary – 100 years of mission involving thousands of Columban missionaries – women and men. We wanted to draw as many people as possible into our celebration but particularly we wanted to draw our friends who have been so faithful in their support. We would love to bring them all together for one mighty celebration of 100 years of mission because as far as we are concerned, without them there wouldn’t be a Columban mission.

Right from the beginning we depended on the clergy, religious, and mothers and fathers of families here in Ireland. They have been so generous in their support for us.

A hundred years ago it was a very inauspicious time to begin a missionary venture; it was in the middle of the First World War and within six months of the Rising in Dublin. Things were very hard for the Irish people. The way that they responded to our mission to China, an enormous country on the other side of the world which we knew so little about, was extraordinary. The generosity of the people was astounding and it has continued down through the years.

So, we would love our supporters to gather here in Dalgan, every stone of which was built by their funds, on 1st July 2018. As one Irish bishop noted, Dalgan was built by the pounds, shillings and pence of the poorest of the Irish people. Right from the beginning, the people who supported us were not just those who were materially wealthy but much more those who couldn’t afford it.

One example of that is Matt Talbot, who sent a donation, I think it was £2 which was a fortune for him, a poor labourer. We still have copies of that handwritten note that he sent along with his donation. He was typical in a way of the generosity of the people of Ireland, who took the idea of this mission to China to heart, and went with it.

We don’t often have a chance to say, ‘thank you’ on a grand scale and we have this huge area in here in Navan, the beautiful college that was built in limestone between 1939 and 1941. We have this lovely area right in front of it where we want to celebrate a Mass of Thanksgiving together with the people and then have a celebration of some of the cultures of the peoples among whom we have worked – such as the peoples of China, the Philippines, Koreans, the Latin Americans. 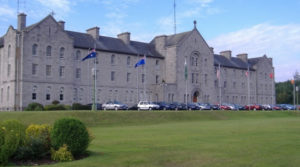 There will be a joyful atmosphere as we share what we are about and show those who have never been to Dalgan before what their funds built and maintained through so many years.

Q – This is very much a family occasion, so those who come with children or grandchildren, what will they find to entertain and interest them?

A – There is going to be a special dedicated section called ‘Pudsy’s Corner’ for the children and there will also be bands from some of the mission countries where Columbans have served and there will be a lot of displays and exhibitions – a chance for people to learn about the Columban story who might not know about it.

Right from the first issues of the Far East magazine back in 1918, there was a section for children. Our founders and those early editors of the magazine, were intent on involving the children. In the past, whenever we went to speak to parishes we would also visit the schools and speak to the children and tell them stories about the mission. I’m sure many of our vocations came from children hearing of the Columbans and life as a missionary through these presentations in the schools.

So, on this Family and Mission Day we want people to bring the children along and enjoy the various things we have lined for the children – such as face painting, competitions, and a dedicated area just for the children. They might also be interested in seeing some of the exhibitions that we have such as the dolls that are dressed in the native costumes from the various countries in which we were.

Q – People will be able to walk the grounds and learn from Ger Clarke about Dalgan’s ecology, its trees, flora and fauna.

A – Part of our mission has been to specialise in justice and peace and in the integrity of creation – therefore ecology has received a great deal of attention over the years. Ger Clarke is a lay collaborator who brings groups of schoolchildren here during the year, and gives specialised courses in ecology to teachers during the summer. 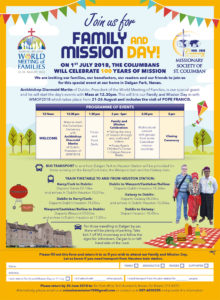 We have almost 500 acres altogether in Dalgan, of which almost 100 acres are under woods, and those woods go right back 200 years. I think we have every native species of timber represented among the woods –so it is a fascinating place.

We have walks through the woods that are very pleasant and the Boyne river and its tributaries actually run through our property.

On this family day, we would love to see a large number of happy children, enjoying the fun and enjoying our celebration – that would add to our happiness. 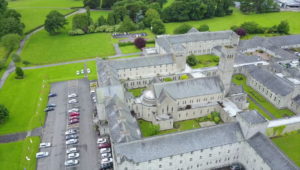 Q – There is a lot of discussion within the Church about mission and being a missionary – what does it mean today?

A – We are ever more conscious that in the past mission was out there and something that, maybe mistakenly, we thought missionaries were doing it for us out there. But over the past 40 years we have come to see much more clearly that mission is for everybody; that by our baptism we are called to mission and that wherever we are, we are on mission. So, whether it is your parish, your school or in your workplace, we are all on mission.

Some like the Columbans have a special calling, they are asked to cross boundaries of language, culture, and indeed of faith, to work and announce, particularly by our presence, that Christ has come and the Kingdom is already inaugurated and that it is a kingdom for all nations.

Over the years in living out this mission we have found ourselves in so many different places and in some extraordinary situations. We have been faithful to the peoples we were called to serve. We have always opted to work among those who were the poorest, the most needy, who were perhaps suffering most. And, through thick and thin, and by that I mean, through wars, famine, natural disasters like earthquakes and floods, we have stayed with the people. We are blessed and give thanks to God for that.

In a place like China for example, where it was so difficult to make any advance, what the people noticed was that when the floods came, when the Japanese came, when the bandits and the communists came, the only ones who stayed were the Columbans. And the people remembered us as those who stayed when the going was tough.

It is a source of pride for us to look back on those early men and how much they suffered and how little they had and survived on. In our cemetery, we have these large slabs of white marble – they contain the names of all the Columbans who died from the beginning. It is very instructive and humbling to look at the very first one. There would be 80 to 100 names on it. You have the name of the priest, you have the place where he died, and the age at which he died, SO many of those first Columbans died in their 30s, and early 40s.

It is another source of consolation to us that we have our own cemetery which, if you come to Dalgan, you will be able to see it down in the corner of our property. There are more than 450 Columbans buried there now.

But also, the slabs of marble with the names are important because there are at least another 250 who are buried overseas in China, Korea, Japan, and all the missions where we have served. We were taught as seminarians that they will bury you where you died and we were quite happy to be buried with the peoples among whom we served.