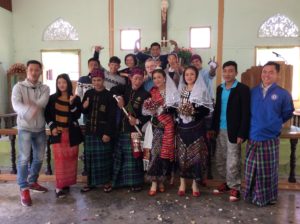 “Recovery is possible anywhere” writes Fr Eamon Sheridan who is working with a life-giving support programme which the Church offers drug addicts in Myanmar’s Kachin State.

Every family in Kachin State in North-eastern Myanmar seems to be affected by drug/alcohol addiction. For over 60 years this area has known only war as the Kachin Independence Army and the Burmese Military battle for control of this resource rich state. As in all military conflicts it is the ordinary poor people who suffer most as they struggle to make a living.

People are poor and live mostly by subsistence farming or by working in the Jade mines. Many people are killed each year in landslides at these unregulated mines. After the latest upsurge in the conflict in 2011, over 130,000 had to flee their villages and now live in camps for internally displaced peoples. This area is also the greatest source of heroin in South East Asia with many poppy plantations in remote areas. The drug and jade barons get rich while many poor young people become addicted to heroin and opium. These drugs are cheaply and easily available. 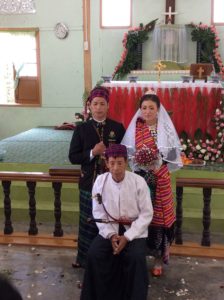 I first met Zau Hpan just over a year ago. He was a volunteer at the Rebirth Rehab Centre in Myitkyina, the capital of Kachin State. The centre was founded in 2015 by the Catholic Diocese of Myitkyina to try and respond to the drugs epidemic. Zau Hpan like many young people started experimenting with drugs and alcohol when he was a teenager. He had no work and his options were to help his family in making traditional alcohol or work in the jade mines. At 26 years of age he came to the centre because he was tired of using, his life had become unmanageable. His family were tired of him and wanted him out of the house.

At the centre he received the medical treatment he needed and started taking the anti-retroviral drugs that he would need to deal with his HIV+ status. He ate well attending all the sessions; he began to gain weight and strength. He relapsed shortly after finishing that first programme. He returned for the third programme and when it was over he volunteered at the centre. That is when I met him. He looked strong, however he was still using secretly and his addiction still had control of him.

That first day I met him he looked at me a little suspiciously. I remember him because he ran over to take my bag but he didn’t speak. I guess he was wondering who this strange big foreigner with a beard was. 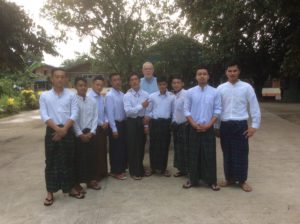 I began to meet with him and six other recovering addict volunteers. Of course my language is very limited but by the grace of God one of the guys spoke good English and helped me with translation. Our meetings were in the afternoon at 2pm. It was June and it was hot and everyone struggled to stay awake, including me. Naw Lat in particular struggled. One day as I was talking his head suddenly hit my shoulder as he had fallen fast asleep. It was not very encouraging. If they were to have any chance of receiving the message the time of our meeting would have to be changed. We moved to 7am in the morning. This was much cooler and people were awake but they were not sober.

At these meetings they shared their stories of addiction and the hopeless place it had led them to. They shared their fears about the war and about feeling they had no future. There was a lot of pain and hopelessness in their sharing. Naw Lat also shared with me. “Wajau (Father) I have messed up my life; I am 27 years of age and I have been a heroin addict for more than 10 years. I have no job, my family don’t trust me and want me out of the house, and I am HIV+. I came here because I have nowhere else to go and I am afraid I’m going to overdose and die. But I can’t seem to stop,” he told me. “If you are really tired and are willing to do anything to stop, then there is a solution,” I told him. 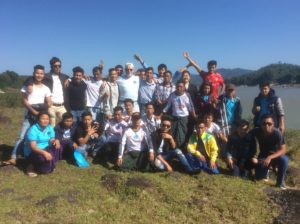 I began to introduce him and the others to the spirituality of the 12 step programmes of Alcoholics Anonymous and Narcotics Anonymous, to the concept of powerlessness and the need to surrender to a higher power. I told them that they only had to stay sober for these 24 hours and that tomorrow was another day. The centre offers programmes such self-awareness, personal leadership, cognitive behavioural therapy. Naw Lat and some of the others started to stay sober one day at a time.

Three months ago Naw Lat celebrated one year of sobriety. His life has changed dramatically. Over the year he joined a Karate Club and has reached brown belt status. He has been employed by the centre as a staff member. He has made amends to his family. His mother was recently diagnosed with terminal cancer and he has taken leave from the centre to be at home taking care of her. In the midst of her illness his mother is so happy that her son is sober. Just last week he got married. He comes to meetings and he is staying sober. 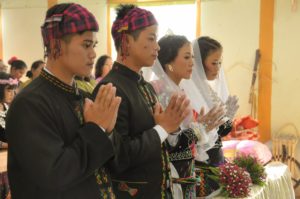 Financially we operate month-to-month depending on the generosity of local people who are already poor but who give from the little they have because they want to do something about the scourge of drug addiction.

If you would like to support Fr Eamon Sheridan’s work, please send your donations to the Far East Office, Dalgan Park, Navan, Co Meath C15 AY2Y. Mark it for Fr Eamon Sheridan. Alternatively, you can donate online at www.columbans.ie or call 00353 46 909 8275.