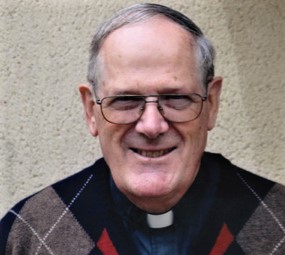 Fr Joe was born in Ballinasloe, Co Galway on 25 April 1936 and he received all his early education there. He attended the Convent school and St Grellan’s and then went to St Joseph’s Garbally for secondary level.

Assigned to Korea in 1962, he was appointed to Kwangju Diocese. He got to know places like Cheju, Mokpo and Noan before returning to Seoul for further studies and an appointment to Donamdong parish in 1965.

He served in Hallim and Wangsibri, Seoul and then worked for a year on Mission Promotion in Britain in 1974. He returned to Mokpo but later accepted the task of developing a new parish Machondong on the outskirts of Seoul.

Those first twenty years that Joe lived in Korea, from the early 1960s and into the 1980s, were the best and worst of times. It was a period of unprecedented economic growth and of political oppression that deepened as prosperity spread. The church found its voice on the side of the poor and the Columbans followed them from the rural areas to gather them into new communities on the outskirts of the cities. There was no doubt about the worth of a Christian presence amid all that turmoil.

After a home vacation in 1983, Joe become the Regional Bursar in Seoul for three years before taking on the parish of Changhowon in Suwon diocese. That was enough time to be prevailed upon to carry the Olympic torch through the town on its way to the ’88 Games in Seoul.

The region of Britain came looking for him again and made him Bursar there in 1990, a job he served in until 2012.

Even when he returned to Ireland at that stage, he continued to act as assistant Bursar in Dalgan until failing health forced him into retirement.

Although he was confined to a wheelchair, he did insist on remaining an active member of the community and enjoyed the late sessions where he claimed the ‘real story’ of Columban mission could be heard.

Joe was a gentle and unassuming missionary whose manner people found attractive and made him their friend for life. He coped quietly with his deteriorating health and died in the Columban Nursing Home on 13 February 2020.