This year’s liturgical celebration for the Feast of St Columban in the Irish Region was led by Fr Peter Dong, the first Columban Father from mainland China and one of the newest members of the Society.

Fr Peter was ordained to the priesthood in China last 25 January 2019, with two other priests and two deacons.

It was a momentous occasion for the Missionary Society of St Columban, as it entered into its second century of responding to God’s call to mission.

Fr Peter attended the Society’s formation programme in the Philippines. 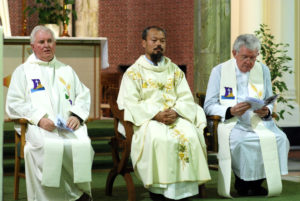 He was sent to Chile in 2015 for a two-year First Mission Assignment.

He speaks Mandarin, learned Tagalog, Spanish and English and will now have to learn Urdu for his new mission in Pakistan. 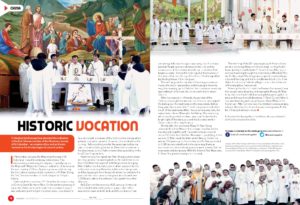 To go on mission to a country that is predominantly Muslim will be another challenging task for Fr Peter, but his faith will see him through.

You can read about Fr Peter Dong’s ordination in the November 2019 issue of the Far East magazine. Order online here: https://columbans.ie/