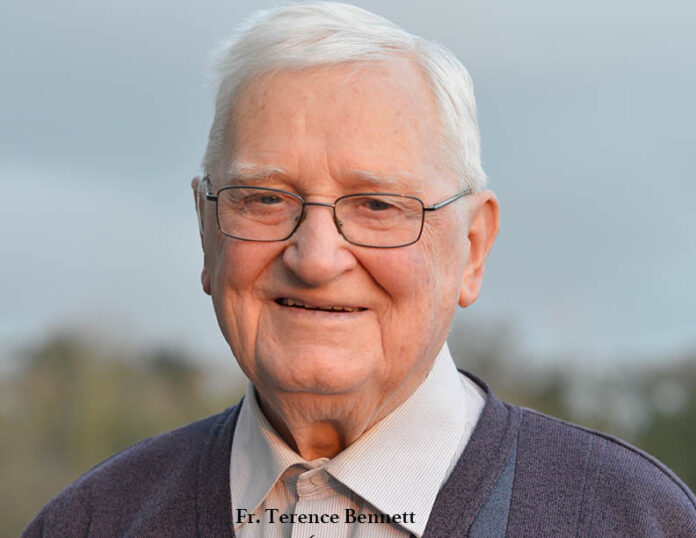 Fr Terence (“Terry”) Bennett was born in Omagh, Co Tyrone on 15th December 1926. He was educated at Loreto Convent PES, and CBS Omagh. He came to Dalgan in 1944 and was ordained priest on 21st December 1950.

Appointed to the Philippines, he was among the pioneer Columbans who worked ceaselessly to restore the neglected parishes of Negros Occidental. After 17 years in Negros, he spent six years in Student Catholic Action in Manila. This was followed by eight years seeking vocations and promoting the Columbans in Britain.

In 1975 he was happy to return to Negros and worked as parish priest first of Sipalay and then of Tabugon. He spent two years on full-time vocations work, 1992 to 1994, based in Negros and covering the islands of Negros, Panay, Cebu and Bohol.

His last parish appointment was to Holy Family Parish, City Heights, Bacolod City, where he served from 1995 until 2008 when he retired to the Dalgan Community. Terry loved parish ministry and was loved by the people in each of his assignments.

While in Dalgan he was delighted to serve as Spiritual Director to the local branches of the Legion of Mary and was an enthusiastic participant in every community activity. “What you see is what you get” describes Terry.

A man of prayer, of deep but simple spirituality, he lived a frugal life, treating his parishioners and co-workers equally, but with special care for the sick, the poor, and the dispossessed. He had a strong sense of the power of evil, and he supported and gained inspiration and strength from the Charismatic Renewal Movement.

Link to the recording of the Funeral Mass of Fr Terry Bennett.