Home Features Greetings from the ‘land of the pure’ 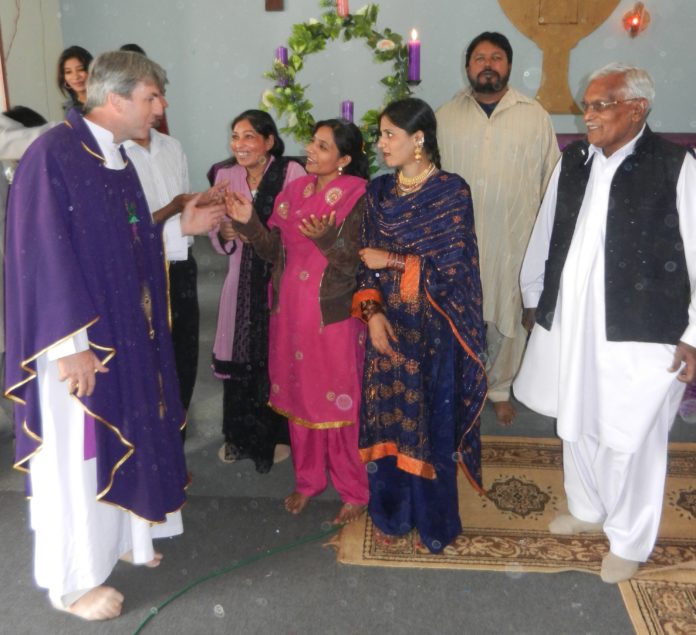 Fr Liam O’Callaghan sends an update on his work in the ‘land of the pure’ which is the meaning of the word Pakistan – the seventh most vulnerable country to climate change in the world.

I am based in Hyderabad city, with a population of 1.73 million, the second biggest city in Sindh province after Karachi.

I moved here in February 2016, after over 15 years in Lahore; it was a big change for me as the provinces of Punjab and Sindh are quite different.

I am working full-time in Justice, Peace and Integrity of Creation (JPIC) and Interreligious dialogue (IRD) issues in the diocese of Hyderabad. Since 1 July, a full-time Columban co-worker, Danish Yakoob, has been involved with me in this work; he has 12 years’ experience in the area of social justice activity in Sindh.

On 1 October, I moved into an apartment in a Muslim community, which serves as an office for us and accommodation for me with a spare room for Columbans when they come to Hyderabad.

We are involved in a number of different works here, primarily working on justice and peace issues and more recently focusing on environmental issues as the situation is so bad here.

The problem of unsafe drinking water is now chronic; last February a Supreme Court ordered Commission of Inquiry into the water and sanitation situation of Sindh revealed that 80% of all samples taken were unfit for human consumption.

Most of the wastewater and effluent – domestic, industrial, agricultural, hospital – goes directly, untreated, into waterways and ultimately to the ocean. It is therefore no surprise that research reveals 80% of all illnesses in the country and 40% of all deaths result from drinking unsafe water.

The other main area of focus for me is interreligious dialogue (IRD) and one of the ways we are trying to work this out is by working on the above environmental issues with Muslim and Hindu individuals and groups, who are involved in these issues too.

We are in the process of creating and training two interfaith groups, one in Hyderabad and one in Mirpurkhas, each consisting of 25 members – Muslim, Hindu and Christian.

We will work continually with them throughout the year on local environmental initiatives – tree planting, water, plastic bags, pollution etc. and hope to involve many more from the respective communities through the core groups.

Through this effort, we are attempting to address two major needs of society here, namely environmental and justice issues and inter-faith harmony, and doing them together. 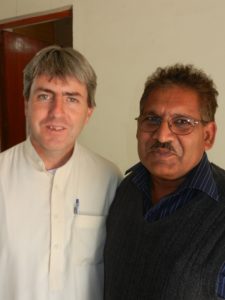 We have received funding from Misean Cara, the department which distributes some of the Irish Government foreign aid assistance through missionaries, for this project. We have a Facebook page for our work, columban jpic ird pak, so feel free to send a friend invite to see what we are at!

Our Columban numbers have remained low over recent years, we were just five ordained, four Irish and one from New Zealand.

But, in July we were joined by two Filipino Columban seminarians who will be with us for 20 months as part of their formation, at present they are learning the national language, Urdu.

Next July a newly ordained Fijian Columban will arrive. And, just last month we got word that two Filipina lay missionaries are appointed here, with the possibility of one more, and are due to arrive next July. So, suddenly our numbers are doubled!

Pakistan continues to limp along from crisis to crisis. Politically, it is once again very unstable; on 28 July, the Supreme Court disqualified Prime Minister Nawaz Sharif, on corruption charges, from holding public office for 10 years in a landmark decision on the Panama Papers case.

It unanimously deemed him unfit for holding office and also ordered an accountability court to open references against him and his family. This has shaken the Government and a new PM, Shahid Khagan Abbasi, was sworn in on 1 August.

Its weakness was seen last month when an extremist party brought the capital, Islamabad, to a standstill with a 22-day sit-in protest demanding the resignation of the Justice Minister over minor changes in the oath required for parliamentarians over belief in the finality of the prophethood of Muhammad. In a worrying outcome, the Government caved in to their demands.

Pakistan continues to be plagued by ever-growing extremism and on-going violence; provisional figures released show that so far in 2017 over 995 people have died and 1,278 have been injured in violent attacks.

The worst of these attacks include a suicide bomb attack at the Sufi shrine of Lal Shahbaz Qalander in Sehwan, Sindh in February, when over 90 people were killed and scores injured, and in June suicide bombings in Quetta killed 14 and in Parachinar 67. No end seems in sight and the suffering continues for so many needlessly.

Economically, the country is struggling and is heavily dependent on the massive investment from China under the agreement known as the China-Pakistan Economic Corridor (CPEC), in which China will invest $51.5 billion in infrastructure projects, many of which are underway.

Even so, economic growth is sluggish and unemployment is high, not helped by a large number of poorly educated and low skilled youth entering the job market. During the year, the sixth ever census was held and revealed the population is now 207.77 million, making Pakistan the world’s sixth most populous country.

60% of the population is under 30 years of age. Pakistan is the most urbanised country in Asia at 36.4% and has 10 cities with populations of over one million. There is so much potential in that youthful energy and the country’s future depends on it being directed in a positive and constructive ways.

I wish you all the blessings you and your loved ones need at this time and especially pray for love and peace for you throughout the year.

If you would like to donate money in support of Fr Liam’s work in Pakistan and other Columban projects click here: https://columbans.ie/donate/