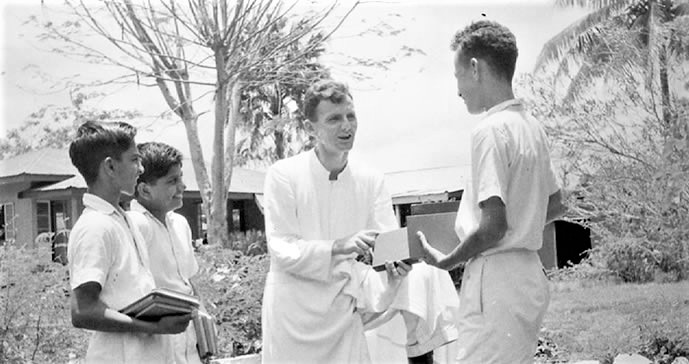 The Irish Film Institute (IFI) has selected a piece of Columban footage from the 1950s titled ‘Songs of the Emerald Isle’ to air on its Media Player to mark St Patrick’s Day.

According to Columban Communications Officer, Fr Malachy Smyth, the Irish Film Institute has a number of films and other Columban footage preserved in its archive.

“One of the better known Columban pieces would be JFK’s visit to Ireland. It was the only colour footage done at the time. That has been on the IFI media player from the outset of the service. It has also been used in libraries and heritage centres around the country and in the Burchfield Penny Art Centre in the USA on different occasions,” Fr Malachy explained.

Despite lockdown cancelling St Patrick’s Day services and events, Columbans and Columban friends and supporters in Ireland and overseas can keep the spirit of the day by tuning into the IFI Media Player and watching ‘Songs of the Emerald Isle’.

Over the three Covid-19 lockdowns, the IFI’s Media Player has grown in popularity worldwide. The Media Player can be found here: https://ifiplayer.ie/

Launched in September 2016, the IFI Media Player is a virtual viewing room where audiences from across the globe can instantly access the rich collections housed in the IFI’s Irish Film Archive.

The Media Player is home to over 1,200 hours of content. The IFI Irish Film Archive collection covers the period from 1897 to the present day, with footage of the most important social, political and historical events of the last century.

It is a treasure trove of movies, newsreels, travelogues, animations, feature films, public information films and documentaries, reflecting all aspects of indigenous amateur and professional production, which can help people explore their cultural identity and connect with the past.