My Journey with Victoria

Victoria is a jolly woman, full of life and very friendly. I never thought that behind the bubbly personality was the dark shadow of emotional, psychological and physical torture that she endured for many years at the hands of her husband.

She came to the parish office several times to re-schedule their son’s baptism because her husband had no interest in having his son baptised. But Mark was getting excited about receiving the sacrament of First Holy Communion and Victoria didn’t want to disappoint him.

One day she came to me crying, telling me all of her difficulties, pains and suffering in her married life. I came to understand that she was a victim of domestic violence for sixteen years. I brought out my concerns during our weekly parish team meeting. We tried to see what help we could offer her.

I went to visit Victoria and her husband at home one day to give them a letter from the parish priest, Fr Jim, inviting her husband to visit him in his office. He wanted to talk to him about his son’s upcoming baptism. The husband was very welcoming and hospitable during my visit. He related well with his wife in front of me but I sensed Victoria was tensed. He came to see Fr Jim the following day in the office. He said he was just worried about not being able to find a sponsor for his son. I offered to stand as the boy’s sponsor and Godparent during his baptism.

During the three years I was assigned to Ashbourne I became Victoria’s friend and confidant. I felt I that was somehow sharing with her the heavy burdens on her shoulder. I could see myself as Veronica, Mary, Simon Cyrene and other disciples in the Gospel helplessly watching Jesus march in agony to Calvary. 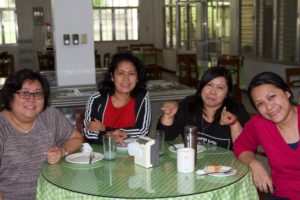 Her husband told their son a number of times that she was a prostitute and that she didn’t deserve any respect. He also said he would one day kill her with a knife.

Several times neighbours went to the local Garda office to file a complaint about the noise whenever she was beaten up by her husband.  But when the Garda arrived at the house he would make up stories that it wasn’t his fault. My dear friend lost hope. She felt paralysed. Always in fear as he threatened to kill her if she ran away or reported him to any authority. He was so suspicious and spied on her sometimes. Her husband would inspect her bag, purse, jeans and everything that she wore and he also checked her mobile phone to see who she had been in contact with. Things were getting worse.

He became suspicious that his wife is confiding to me so he warned her to avoid talking to me. He told her he would kill her or kill me if she continued the contact with me. I told our parish priest about this. I kept encouraging her to stand up to him. But she was crippled with fear. She couldn’t leave the country because her husband had taken her passport.

One day, I was at the local supermarket to buy groceries. I spotted Victoria at the entrance of the shop, staring blankly out into the heavy rains outside. I saw the sadness in her eyes. She didn’t see me so I greeted her. She told me another sad story. That morning, arriving back home after bringing her son to school, she was not allowed in by her husband. She was told that she can only be allowed in the house when their son is collected from school. That meant she had to stay out nowhere to go until it was time to collect her son in school after classes. I got so angry and I didn’t know what to say. I thought to myself, “for God’s sake this human being is treated like an animal!”.

I had spoken to the social workers and they advised me to listen to her and never to push her to go to the Women’s shelter against her will. Our parish curate, went to see the Gardai to file a record when Victoria told us that her husband hit her. She went to the GP so she had a record to show that she wasn’t making up the story as what her husband always tell anyone who would come to investigate. We certainly did everything! So I had no more words left to say.

One day, I was on my way to the parish office when I saw my friend walking down the street. It was snowing and was too early for her to be out. There was no classes because it was Saturday so I thought, ‘why would she be out in that weather’. I discovered that she was forced by her husband to stay out of the house. I invited her to the parish office. I made a cup of coffee for her and sat with her to listen to her agonies.

A week after this meeting, she came to the parish office looking for me. She was in a panic and was looking for help. She has finally decided to leave the house. But not without her son. I phoned the social worker right away and spoke to her about Victoria’s decision and so that they can instruct her what to do.

The next day when I came to the parish office I was informed by the parish secretary that Victoria is in her friend’s house hiding and ready to go. After collecting her son from school that afternoon, we brought her to the Women’s shelter in a nearby town. The social worker at the shelter gave me an assurance that they would do everything to protect her and her son.

That night when I came home I learned that her husband went looking for Victoria in the parish office. The following night he came to see me in our house crying for help him find his family. He asked me if I knew where they were and I denied. I was shaking with fear but had to compose myself. I managed to pretend I wasn’t nervous and had everything in control. Thankfully I had companions in the house that day so I felt reassured that if he was going to do anything to me at least there were people around. As part of my commitment, I journeyed with Victoria in her struggle. I know that like me there are many missionaries putting their lives at risk so “others may live.”

My friend is in good hands now. She has gained her confidence and self-respect back. I know it is not easy to stay inside the shelter knowing that her battle is far from over but step by step she’ll get there.

Mark is causing her pains and is troublesome. It is another layer of her personal struggle of being a mother to her son who is also a victim of the circumstances. The boy is undergoing psychological therapy now but she knows it will take some time for him to recover and be healed. The last letter I received from her told me that she moved out from the shelter with the help of the social worker. She has finally found a home for herself and her son. She is still struggling with her son but she’s hoping for a brighter future ahead.

My journey with Victoria has taught me patience and endurance amidst difficulties. To be more trustful to God and to love unselfishly. She told me that if not for her son it would have been easier to make decisions. And yes indeed she was right. It is my wishes and prayers that someday she’ll harvest the good fruit of her labour! Behind the clouds, there is the sunshine!