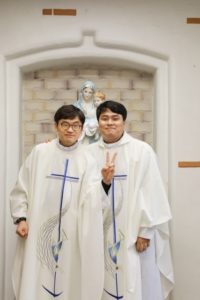 Both newly ordained priests said they looked forward to working as Columban Missionaries, especially in ministering to the poor and marginalised as they carried out their priestly duties.

The ordinations took place with both churches overflowing with family, friends and well wishers together with members from the local communities. The presence of retired Archbishop Youn in Kwangju added to the happy occasion.