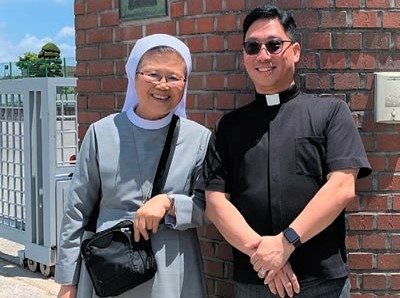 “You have the wrong number. This is the North Korean embassy.”

It was sometime in 1999 when I did my First Missionary Assignment (FMA) in Peru, recalls Fr Thomas Seungwon Nam, a South Korean Columban missionary.

I had to renew my passport. For the first time in my life I spoke to a North Korean was because the Peruvian secretary couldn’t distinguish the South/North Korean embassy in Lima, Peru, and contacted the North Korean embassy. To further my embarrassment, I heard the embassy staff say, “The people from South Korea are often confused when making calls.”

My hand was shaking as I held the phone, because like all South Koreans, my childhood education about the military dictatorship of North Korea was deeply ingrained.

She said, “It is a pity that the Korean peoples are divided into two embassies here in Peru, just like the reality of our countries in Korean Peninsula.” Then she talked about the unification of Korea.

At that time, in South America, there were many countries that established diplomatic relations with North Korea earlier than South Korea. After this dramatic experience, I sometimes noticed North Koreans, and I felt sad that I didn’t know them. From this experience, I learned that if I can’t see them, I don’t accept them in my heart. Therefore, I began to hope that one day, when I had the chance, I would learn about North Korea and work for all Koreans.

After mission in Peru, when I was studying at Catholic Theological Union in Chicago, Illinois, I had the opportunity to meet parishioners at the Korean community, where Columban Fr John Smith was pastor. A family of an old couple in the parish was appointed as a family to help a North Korean young man who worked at a Russian logging camp and filed for refugee status adjust to living in the United States. The young man lived with the older couple for over a year.

Sometimes I went to visit them, but I couldn’t talk to the young man who was wary. I was able to hear the story of the young man through the old couple. I learned about North Koreans who escaped from North Korea and went to China or Russia to live during the ‘Affliction March’ that started in the mid-1990s.

When I heard that they were living in South Korea, the United States, and Europe, I became more interested in North Korean pastoral care. Looking at photos of people who died on the Amrok River (Yalu River) and the Dooman River (Tumen River) during their escape, and discovering that there are North Koreans sold by brokers all over China, I felt the urgency to do something for them. I prayed that God would give me an opportunity to work for North Koreans.

In 2015, the Committee for reconciliation/peace was launched at the Conference of Major Superiors of Korean Men’s Religious Institutes and Societies of Apostolic Life. In the autumn of that year, I participated in a tour of the North Korean and Chinese border regions so as I could better understand the situation of those who have fled for their lives.

The following year, the Korean Region opened the North Korean ministry in earnest in the name of ‘Peace Pastoral.’ Although the reality is that there is a pastoral limitation due to the influence of the situation surrounding the Korean Peninsula, we have been working steadily, especially working to meet and accompany North Korean refugees. 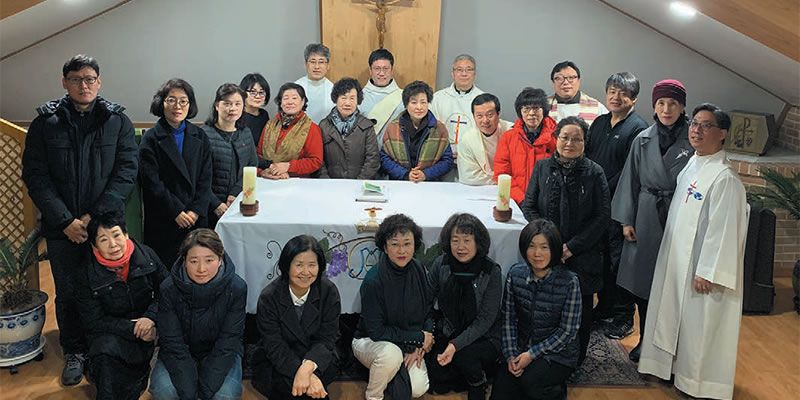 Many people in the church who are interested in reconciliation, healing, and peace on the Korean Peninsula can be the first step to establishing peace on this land and even in Northeast Asia.

I am currently registering as a North Korean refugee resettlement helper at the North Hana Centre helping male refugees. We visit Hanawon (“hana” is “One” and “won” is a “place” or “house”) and celebrate the Masses with Brothers and priests from religious orders and mission societies and the priest who is in charge from Suwon diocese on Sunday morning.

In addition, Hanawon also programmed the ‘One-night and Two-days Family Culture Experience’ (an organisation belonging to the Ministry of Unification that helps North Korean refugees prepare for settlement in South Korean society after entering Korea) and invited Catholics and Buddhists to run the programme together.

Some dioceses joined the programme and Columban donors as volunteers are participating in the programme for female North Korean refugees, where they live for the first time with South Korean volunteer families. This programme is a good opportunity to make them feel we are family.

After the programme finished, I invited some of the donors and female North Korean refugees who met while participating in the programme, to meet at 3pm on the third Monday of the month at the chapel in Columban Mission Centre to celebrate Mass for reconciliation/peace in Korea peninsula.

The chapel has a special meaning as it is a church that commemorates foreign military priests, including the seven Columban priests who died during the Korean War. And since last year, the Columban peace office delivered scholarships to North Korean youth home and young people individually. We are also helping them to live well in Korean society and cheering for the Sisters who run the group home.

When the Korean War broke out, Bishop Gu Inlan (Columban Bishop Thomas Quinlan), and Columban Fr Philip Crosbie, were captured by the North Korean army. Like other foreign prisoners of war, they witnessed many deaths.

The two missionaries returned to Korea, where the scars of the war remained, and prayed for peace and reconciliation while living with the people of this land for the rest of their lives. In total, seven Irish missionary priests were killed and martyred by the North Korean army.

The Korean Catholic Church is promoting a beatification for the 81st martyrdom during the Korean War, including the two Columbans, and will soon lead to the canonisation. I can tell you that the beginning of the Columban Peace Pastoral has continued from these people.

The Korean Church has been praying and working for peace on the Korean Peninsula. It is not just about remembering the past sacrifice or reviving the North Korean Church, but we also hope that you will continue to pray for peace in the Korean Peninsula and for reconciliation and healing of the nation, and to create a society where Koreans and North Korean refugees live in harmony with each other.

Many people in the Church who are interested in reconciliation, healing, and peace on the Korean Peninsula can be the first step to establishing peace on this land and even in Northeast Asia.

I hope that the members of the Missionary Society of St Columban will also pray together for the reconciliation and unity of the nation.

Fr Thomas Seungwon Nam is the Vice regional director of Korean region and oversees the Vocations Office, Associate Priests, and the Peace Office. He is Chairman of the Committee for reconciliation/peace of the Korean People for the Conference of Major Superiors of Korean Men’s Religious Institutes and Societies of Apostolic Life, which involves the ministry for peace on the Korean Peninsula.