Home CLM News Kyungja Lee, is a Columban Lay Missionary from Korea. She gave this... 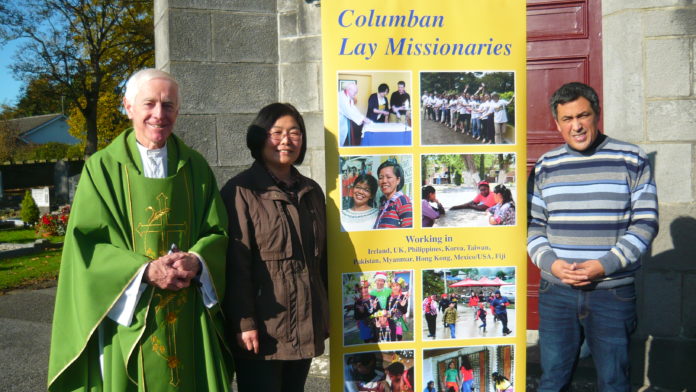 I grew up in a family which followed the rules of Confucianism. The teachings of Confucius emphasise the importance of the family /and social harmony. So, I obeyed and supported my parents and respected the elderly. When I was young, my family was not rich, so my ambition was to have job to support my parents and help my brothers and sister in their education. After graduation, I worked as an accountant. Gradually, I was able to support my family and save money for my future marriage. I was financially well-off and began to enjoy my social life.

In 1992, we learned that my father had stomach cancer. Though we were not Christians, we prayed to God and asked HIM to help my father recover. It was the most difficult time for us. He underwent an operation but he died two years later. He received the sacrament of baptism from a lay person shortly before he died.

After my father’s death, my mother, younger sister and I decided to become Christians and we were baptized on the 24th of December in 1994. Even though I did not know much about God then, I worshipped Him. I attended mass every Sunday. I became a member of the choir and the Legion of Mary. I helped build houses for the disabled and visited lepers. I enjoyed these church activities. However, I felt that something was still missing in my heart.

So, I started to look for that something I had not been able to name. While I was looking for that something, a religious sister gave me a book about Yeon Shin, a Korean Columban Lay Missionary who died while on mission in Fiji. Her story showed me another kind of life and I was inspired by her missionary journey. That changed my life.

Joining Columban Lay Mission was not an easy decision. It meant I had to leave my family, my job and my comfort zone. But I wanted to be a missionary and to have an experience of God like Yeonsin. That desire and the sense of a calling from God proved to be decisive. It allowed me to let go of the security of the job and the salary which was the major factor. So, eventually, I joined the orientation program for Columban overseas mission and then, received my first assignment to the Philippines.

I was assigned to parishes among the ‘urban poor’ in Manila. Most of the poor people in these areas lived in a small room with up to 6 or 8 children. There were no jobs for parents and many people spent their time playing Bingo or Mazong while the children played in the street. I was involved in different ministries over the years such as working with teenagers, out-of-school children, homeless people and the elderly. Then I worked with the BECs: that is, small neighbourhood groups, who meet to reflect upon scripture, apply its lessons to their situation and support each other in their struggles.

When I was into my fourth year on mission, I was asked to organize a community in an abandoned chapel. I started with house to house visitation. Then, I invited the out-of-school children to the chapel and read children’s books with them. At the same time, I invited those who were in school to teach the Tagalog alphabet to out of school children. These activities provided the young people with a good reason to gather in the Chapel and a reason to feel proud of themselves. Finally, we started celebrating Sunday mass there. I invited the young people to practice hymns for mass and they became choir members and some became altar boys and girls.

Many of the people in the community were becoming active and gaining confidence. I was inspired by their faith and by the love and the gifts they shared with each other. After few years I felt that they could manage, and that it was time for me to take up an assignment in a different area.

Two years ago, I was back in the Philippines and I was able to visit the people in that community. They continue to celebrate mass every Sunday and even join the main parish activities. They renovated the second storey of the chapel for meetings and teaching catechism. I was so grateful to God to let me see His work there and allow me to meet them all again.

Now, I have been living in Ireland for almost three years as a missionary. Presently, I am working with migrants, asylum seekers and refugees. There are about 800 people from over 40 countries living in the largest accommodation centre. Many are from Syria and others are from Eastern Europe, the Middle East, Africa and Asia. I am with them just as a Friend visiting, listening and supporting them. I work with a women’s group, and help their children in a homework club. I visit the people and hear how they came to Ireland. Some are separated from their own family, some have lost parents, siblings and friends. One of the families from Syria came to Ireland 7 months ago. The husband’s family use to have a small cheese factory but the factory and his house were destroyed by a bomb and his brother were killed. Luckily, he had already fled to Lebanon with his own family. He was there for 6 years and finally came to Ireland. I couldn’t find any words when he showed me pictures of his hometown before and after the bombing. I cannot imagine his long journey to Ireland and his family’s fearful experiences.

Jesus himself was a refugee and migrant and now He asks us to love our neighbour and welcome strangers. Jesus challenges us and asks us to welcome and accept them as members of society without any prejudice. I think God has a way of orchestrating the different parts we play in our lives. He just wants us to do our bit and leave it to him to make it all work.

As an overseas missionary, I thank God for calling and giving me the opportunity to live and share with the people I have met. God took my loving father away, but He gave me the leap of faith and life. God called me to be an overseas missionary through the life and death of Yeon Shin. While Yeon Shin was not able to continue walking the path she chose, she inspired me to continue her unfinished walk.

I am now 20 years into my mission journey with the Columbans. My inspiration comes from the many people who encourage me to continue my journey as a missionary. They keep me going!

I would like to finish with my sincere thanks to you, for giving me this opportunity to share my story. God Bless! 감사 합니다.