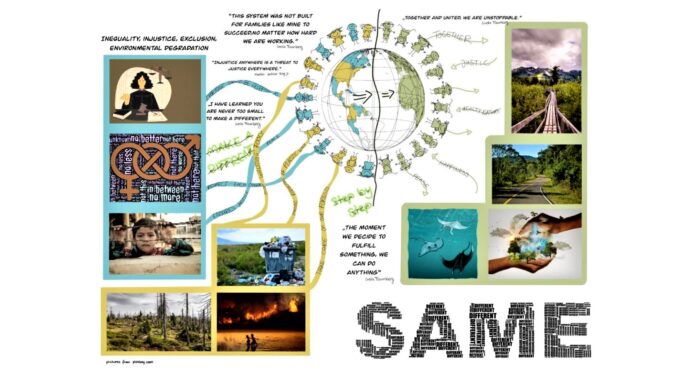 This article by Megan Nolan of St Michael’s Holy Faith Secondary School Finglas, Dublin came third in the Columban Schools Media Competition (2022) in Ireland. The theme was, ‘Anyone Can Make a Difference: 21st Century Changemakers’. It is illustrated by Amy Fleming of Scoil Phobail Sliabh Lauchlan, Rathmore, Co Kerry, who came third in the Image section of the competition.

“If one member suffers, all suffer together.” Corinthians 12:26

In 2016, the Central Statistics Office reported there were 5,009 homeless males and females in Dublin – 2,968 were homeless families, 765 were aged 0-4. In September 2021, the Irish Times reported that a total of 8,475 individuals were homeless in Ireland with 1,800 children living in emergency accommodation in Dublin. While Dublin shut down due to the Covid-19 pandemic, the homeless were shut out. Why? According to the New York Times it is because homeless people have “no redeeming qualities.”

One of few people who brought light to the darkness that is homelessness is Mark Hovarth. Having earned a six-figure salary, Horvath lost his job and fell into poverty. He survived as a con artist and suffered as a homeless drug addict. He found a way to turn his life around by documenting insights into his life as a homeless person in the United States of America. Today, despite working with major brands such as Pepsi and General Motors, Horvath channels his energy into Invisible People.

According to Phoenix Magazine, Invisible People is “the only non-profit organisation dedicated to raising awareness and education around homelessness in the United States”.

Through his inspirational and educational talks, Horvath shares lessons of equality, justice and inclusion. He conjugates togetherness and creates a sense of community, often reminding us of the Bible’s “if one member suffers, all suffer together”. In order to eradicate this suffering, the Bible teaches us about the value and importance of wisdom, justice and peace. Horvath spurs us to stand side by side in solidarity with our sisters and brothers, especially those living in poverty.

He encourages us to, “Turn away from evil and do good” (1 Peter 3:11). Horvath applies these values and shares his wisdom to the world by documenting the lives of homeless people. He is creating a peace between those lacking opportunities than the rest. What Mark Horvath teaches us is that we can all redeem ourselves with the helping hands of God by helping others around us.

To the same degree, Columban mission shares the kindness of our Lord and cares for the solidarity of the impoverished. For example, Columban lay missionaries in Britain have supported the homeless through, ‘Tuesday Breakfast’. Also known as ‘Let’s Feed Brum’, it is a charity dedicated to feeding people who can’t feed themselves. If we want to eradicate inequality, injustice and exclusion we all need to join the work of Columban missionaries. Together, Horvath and the Columbans show us that if we draw on our own faith and personal experiences we too can become changemakers. We must become changemakers!

As Fratelli Tutti, [which means All Brothers], number 64 states, “We have become accustomed to looking the other way, passing by, ignoring situations until they affect us directly.” This pertains to us as a society. We have turned away from those in need because we are comfortable with what we have. We do not try to give others around us our thoughts.

The world we live in today has many resources. Hovarth used his limited resources to become a beacon of hope for homeless people. Similarly to Horvath, we too can become changemakers and shift the ideologies of those who do not see others with less fortune as our equals. What can we do to achieve this?

According to Albert Einstein, “The significant problems we have cannot be solved at the same level of thinking with which we created them.” Therefore, we must change our approach. We should assist people without luxury by fundraising. Promote help for the homeless. Advocate the redemption jobs for those who lost theirs unfairly due to uncontrollable circumstances. Create support groups for those who wish to gain a second chance at what society deems a ‘successful’ life. Talk through the uncomfortable subject of homelessness in our schools.

Pope John Paul XXIII defined the common good as, “the sum total of social conditions which allow people, either as groups or individuals, to reach their fulfilment more fully and more easily.” We must use our resources for the common good.

As a young girl in Dublin, I too am guilty of passing by those who ask for mere “spare change”. Why do I do this? Is it because society has taught me to judge those who are ‘less than’. I cannot judge those shoes I do not walk in; I can only judge my own actions. I have been blessed to attend school and have a roof over my head but after discovering the numbers of homeless people on my doorstep, I have realised I must become a changemaker like Mark Horvath.

I am hopeful. I have hope that we all will give to those who are in need and who are brave enough to ask for help. I have hope that when my children are walking the beautiful streets of Dublin, they will not have to pass a person like you and I, on the ground, with no more than an old coffee cup and the clothes on their back to survive. 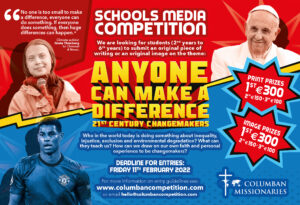