The Society named the MAYNOOTH MISSION TO CHINA was recently set up in Ireland to spread the Faith among pagans, especially the Chinese. The Holy See was consulted beforehand and the Irish Bishops gave their approval.

A little later the founders established a new College with an oratory named St Columban’s College at Dalgan, Shrule as the seat of the Society in this diocese. They did so with permission given under certain conditions for a year by our decree of 29/11/1917.

Based on many indications, especially the very purpose of the society, the character of the founders, and the truly marvellous zeal of the whole of Ireland for this project, we may hope with the greatest confidence that very rich fruits for the good of the whole Church will spring from this society.

Therefore we joyfully assent to the petition of the founders and canonically erect this society as a diocesan society in this our diocese and declare it erected; we approve its constitutions until it is recognized by the Holy See but only under the conditions stated in this decree; and we give permission with no time limit for the aforesaid College of St Columban to continue as the headquarters of the Society in this diocese provided all legalities are observed, under the same conditions as before. If any of these conditions is violated this permission immediately expires. The conditions are: 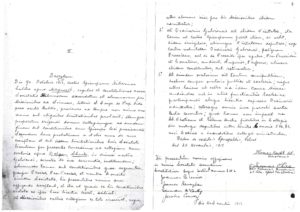 Given from the Episcopal Residence of Galway on the 28th day of June 1918.

We accept this decree and the attached conditions in the name of the Society according to its constitutions on this 29th day of June in the above mentioned College.