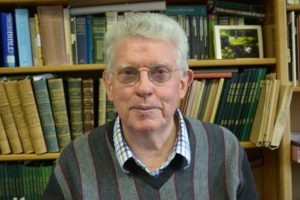 A new ministry overseen by Fr Gerry Neylon involves reaching out to relatives of Columbans who served in China in the past to keep their memory alive as well as informing them about what Columbans are doing today in China.

Fr Gerry Neylon came home to Ireland just before Christmas 2016 after serving 18 years in China, 18 years in Taiwan prior to that and another four in South Korea at the very outset of his missionary life.

“I was ordained in 1973 and appointed to South Korea first. I had just completed my first term of four years there when I was asked to be part of a group of five Columbans going to Taiwan to open a new mission.”

He worked in Taiwan from 1979 to 1997 and then he went to Hong Kong in August 1997, just a month after the handover of the territory by the UK to China in July 1997. “I was there for a short while before I went to live on the mainland in the city of Wuhan. It is a city of 11 million people on the Hanyang River, halfway between Hong Kong and Beijing.”

“As non-Chinese, we are not allowed to be involved in religious matters. The question then is what are we doing there or what can we do? We can do a lot. For instance, China is desperately looking for teachers, particularly teachers of English and the Columbans, through an organisation called AITECE, have been recruiting teachers for China since 1988, from Ireland, Britain, the US, Canada, Australia and New Zealand. When you meet people, the handiest thing is to say that you are a teacher of English because if you say that you are a priest or religious, while most people probably couldn’t care less, a few might raise concerns.”

“Part of my mission here in Ireland is to make contact with the families and relatives of those Columbans who served in China. When I was asked to do this work, I imagined that there might have been up to 100 Columbans there – because we only started there in 1920 and the last Columban was kicked out of China in 1954. The ‘Four Felons’ [Paddy Ronan from Kilmanagh, Co Kilkenny; Jack Casey from Gort, Co Galway; Owen O’Kane from Carnlough, Co Antrim; and Paddy Reilly from Moynalty, Co Meath] were expelled in November 1953 and Fathers Aedan McGrath and Ted MacElroy followed in 1954.”

“However, I now know that there were in fact over 200 Columbans in China. Not all were Irish but the vast majority were. Some 180 were Irish – coming from 25 of the 32 counties.”

“One of the big challenges for me is how to make contact with the families. Our Columban publication, ‘Those Who Journeyed With Us’ contains a blurb on each Columban who has died, providing information on where he was born and educated. But there mightn’t be any trace of him in that place any more… so that can be difficult. Generally there are relatives belonging to him somewhere in Ireland and they might even be in the county of his birth in some cases. But I don’t have even a telephone number – so it is challenging!”

“Nearly everyone related to the Columbans who went to China in the 1920 or 30s, certainly their siblings, are dead as they are themselves. Fr Dan Fitzgerald, who died in August 2016, was the last one. So, we are talking realistically about nephews, nieces or grandnephews and grandnieces.”

“The relatives are proud of their Columban family members and delighted that somebody is showing interest in their uncle or granduncle.”

“I believe the Columbans who worked in China were wonderful people and top-notch missionaries. They weren’t all saints but they worked in unbelievable conditions – no running water, no roads, no electricity. I have been to all the places where the Columbans worked – in Hanyang (Hubei province), Nancheng (Jiangxi province) and Huzhou (Zhejiang province). I would dearly like to honour them and the only way I can realistically do so is through their relatives.”

“One of the striking things I have learned from their relatives is that when these Columbans came home to Ireland they never spoke about China. I can only surmise that they were really traumatised. As they saw it, the whole thing had gone up in smoke and a godless regime had taken over and some of them were tortured or killed by the communists. Some of them didn’t necessarily suffer physically but mentally they couldn’t figure the whole thing out. Some would have wondered should they have gone to China at all – all their work had been devastated. It was a highly emotional issue for them. The people that the Columbans were dealing with in China, who were baptised or became good friends, got a very bad time from the communist regime because of their association with the Columbans. So, the Columbans would have said, ‘if we hadn’t gone there, these people wouldn’t have suffered.”

“I feel strongly that they were crying out for counselling and psychotherapy but at that time this was unheard of. These Columbans were fantastic but they themselves felt that they were failures – how sad! They really needed to unload all of that stuff – but probably, at the time, they had no idea of how to do it.”

If you had a relative who was a Columban who served in China and would like to get in contact with Fr Gerry then write to: Fr Gerry Neylon SSC, St Columban’s, Dalgan, Navan, Co Meath or Tel: (089) 4686965 and ask for Fr Gerry Neylon or email [email protected]