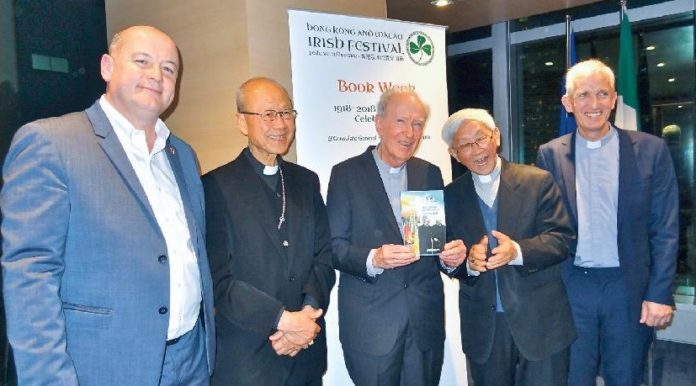 With the launching of ‘Columban Missionaries in Hong Kong’, a new book authored by Fr Joseph Houston, the Missionary Society of St Columban kick-started its centenary celebrations during a special reception at the Irish Consulate on 15 March.

During the event, Fr Houston said he was delighted to be assigned by the China Mission Unit of the Congregation to write about the missionary work of the pioneers of the society. He expressed his gratitude to those involved in the production and printing of the book, as well as the support the support of the Irish Consulate. 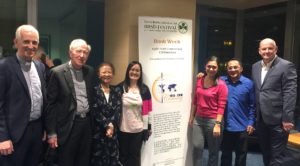 The author read out anecdotes from the book, which spoke of the perseverance of the missionaries in Hong Kong in the last century, such as Fr Aedan McGrath who was responsible for the establishment of the Legion of Mary in China and later in Hong Kong in 1948 with the approval of Bishop Henry Valtorta.

Fr McGrath was later arrested and imprisoned in Shanghai from 1951 to 1954, yet the messages passed from him said that he was happy in jail and he was arguing with guards over religion every day! In later years, the priest still made regular visits to Hong Kong to encourage the legionaries.

Another interesting narrative for Fr Houston was how priests expelled from China got a sense of freedom after they arrived in Hong Kong. He described the experiences of Fr Luke Lynch, a refugee priest, who was amazed by the high-speed train from Lowu, and was joyous about eh smiling faces all around and the cigarettes given to him. 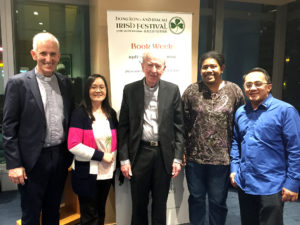 The book, with a cover photo of co-founders of the Society, Bishop Edward Galvin and Fr John Blowick joining hands, is part of the third volume of ‘History of Catholic Religious Orders and Missionary Congregations in Hong Kong’, published by the Centre for Catholic Studies of the Chinese University of Hong Kong and edited by Fr Louis Ha Ke-loon and Patrick Taveirne in 2009.

Fr Houston told the Kung Kao Po and the Sunday Examiner that it took him four to five months to do archival research in Hong Kong as well as in Ireland, then make amendments and updates before publishing the book. He said the most difficult part was choosing from the sources and deciding what to include in the book. 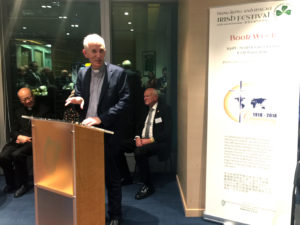 Fr Houston hopes the book can help fellow missionaries pass on a legacy of commitment to people, encourage them to love the city and make Hong Kong a better place.

Fr Jim Mulroney, who edited the book, gave a brief history of Columban missionary work in Hong Kong, from the first meeting of Fr Blowick with Bishop Dominic Pozzoni in 1920, to the transfer of the headquarters of the Columban Society to Hong Kong in early 2008.

He expressed the Society’s gratitude to all the associates and well-wishers who supported the missionary work of the congregation for over a century, including John Cardinal Tong Hon, Joseph Cardinal Zen Ze-kiun who welcomed the transfer of the headquarters to Hong Kong. 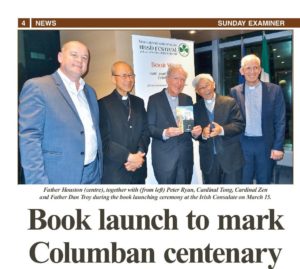 Peter Ryan, consul general of Ireland to Hong Kong and Macau, who hosted the event, was appreciative of the Columban missionaries for their humility, natural empathy with people and as well as their contribution of bringing Christianity to China.

He also honoured the great ambition and determination of Bishop Galvin who came up with an idea of setting up a missionary society in China, braving the long distance from Ireland and the difficulty of traveling one hundred years ago.

He said the book launching ceremony had a special meaning as it took place during a month in memory of St Patrick, the patron saint of Ireland, who like many early Columbans, had a difficult history of living in exile and being persecuted.