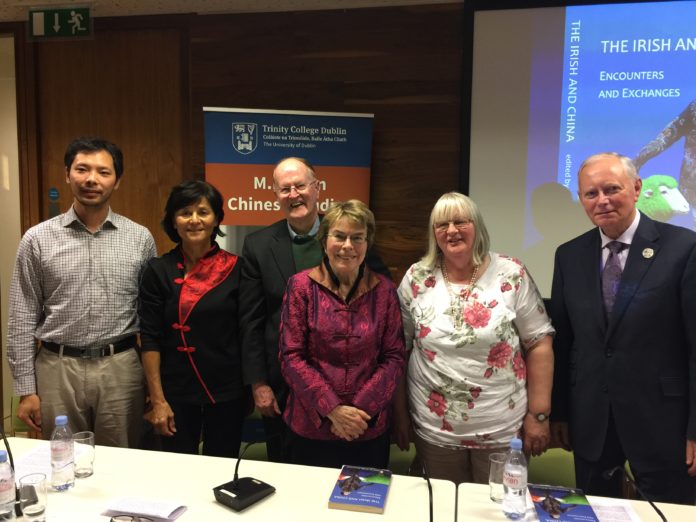 A new book titled ‘The Irish and China’, which contains a chapter by Columban Fr Hugh MacMahon, was launched in Trinity College, Dublin last week.

Published by New Island Books, it is edited by Professor Jerusha McCormack, Visiting Academic at the Asian Studies Centre at Trinity College, Dublin and President Michael D. Higgins has written the Foreword.

The book brings together fascinating essays on a wide range of Chinese-Irish connections, from literature and science to philosophy and food, and many things in between.

Fr Hugh MacMahon’s chapter is titled, ‘In the Footsteps of James of Ireland: Encounters with Irish Missionaries in China’.

In 1318, the Irish Franciscan friar and explorer James of Ireland accompanied Friar Odoric of Pordenone to the Far East, thus becoming the first Irish person in China. Since then, encounters between the Irish and the people of China have proliferated.

Commenting on the book, Fr Hugh explained, “It is a collection of chapters on different contacts between China and Ireland over the centuries.”

“The curious thing is that the Chinese seem to have been more interested in Irish development, history, literature and culture than the Irish were in China. It should be the other way around. China is a world power with a long history impacting on world affairs and culture while Ireland is a small island at the edge of Europe. At least twenty cities in China each have a far greater population than the whole of Ireland.” 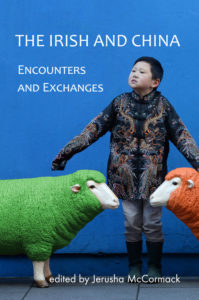 “I wrote the chapter on religious contacts over the years (the first Irish monk went to China in 1318) and used the opportunity to illustrate some of the things the Irish could learn from China.”

“My own attention was drawn to those features because they resembled something familiar to me from my Irish heritage. I discovered there is a human connectivity between cultures, even Irish and Chinese, because we are basically the same human beings with the same hopes, abilities and needs.

The questions we all ask about life are much the same and the answers we have arrived at, up to recently at least, are not all that different.”

“If the book has one message it is: humans have to learn from each other to make any progress and we learn more from ‘strangers’ than from those like ourselves.”

“At the launch of ‘The Irish and China’ book in Trinity College Dublin last week, I was asked why so many Irish who had lived in China found resemblances between the two peoples. I have come to the conclusion it is something very human that was preserved in both traditional cultures.”

“In neither civilisation is boasting seen as ‘cool’, people feel ashamed if they hurt another‘s feelings and indirect speech is common in order to show respect for the person you are talking with.”

“I remember being told in Korea never to say ‘No’ to a request. Rather, say ‘I will think about it.’ We have much the same habit in Ireland. Some would criticise traditional Chinese, Koreans, Japanese and Irish for this roundabout way of talking but it does show a commendable consideration for others.”

“Both cultures accepted that the individual should not be the centre of everything but part of a common effort to get on with each other and find happiness in the process.”

“In China, Korea and Japan this attitude was modelled and kept alive by Confucianism. In Ireland and Western Europe, up to recently, it was passed on through Christian practices and communities.”

However, modern culture, giving priority to personal emotions and urges, threatens this openness of ‘give and take’, of contributing to making society better for all and expecting others to do likewise.”

“When I put forward these views at the ‘Launch’, no one contradicted me. Perhaps it is a sign that politeness has not faded from Irish culture!”