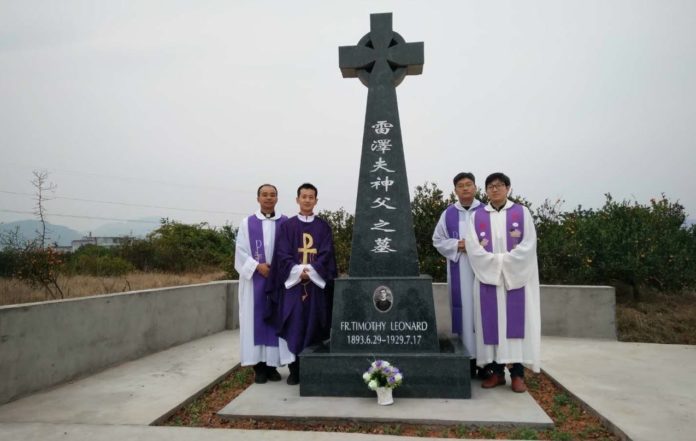 John M Leonard is a relative of Fr Timothy Leonard, the first martyr of the Missionary Society of St Columban, who was killed in China in 1929.

In 1929, Fr Leonard was taken captive while celebrating Mass and killed by Communist bandits.

When John Leonard made the hazardous walk last September to the Holy Mountain of San Gang, where Fr Timothy’s grave is located, he was greeted with an shocking sight – dug up earth and an open excavation where the grave is located.

A few metres away, the Celtic headstone which had been erected to commemorate his relative in 2001, lay toppled to the ground.

He initially thought bandits had struck Fr Timothy once again, but he was relieved to learn this was not so. 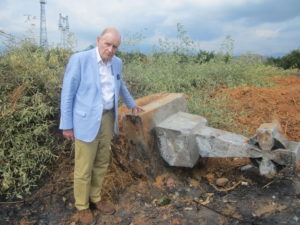 The Church authorities had decided to erect an upgraded Celtic cross headstone over the grave. Standing three metres high, it is now visible from the roadside and has Fr Tim’s picture etched into the stone.

Local parish priest, Fr Savio Zhang Fei Qi, whose project this is, explained that a small altar will be incorporated into the site to facilitate the celebration of the Eucharist by visiting priests leading pilgrimages.

A new two metre-wide pathway will replace the old dirt track with signage pointing to the Columban martyr’s grave.

Writing in the Limerick Leader, John Leonard said he was pleased with the interest in China in his cousin and with the upgrading of his resting place.

“On a side note one could not help but notice that mainland China is a builders’ paradise at present with cranes adorning the skyline everywhere in the big cities. They are building shopping centres, office blocks, apartments, roads, railways and metro systems.” 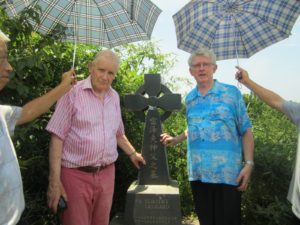 “Wuhan, one of the cities I visited and which has a population of 11 million people, did not have a metro system six years ago. Its metro is now the most modern in the world and they are building an extra line each year to cater for their millions of commuters.”

“The final leg of my journey was Hong Kong, that unique and fascinating city of seven million inhabitants where east meets west, Here I visited the headquarters of the Columbans at Tseung Kwan O which is now headed by Australian Fr Kevin O’Neill.”

John M Leonard is a relative of Fr Timothy Leonard, the first martyr of the Society of St Columban. He recalls how a portrait of the missionary in his family home set him on a journey of discovery in China.

As a child growing up in Peafield, Ballysimon, by the banks of the Groody river, we received the Far East magazine every month and as a child I would read Pudsy Ryan. I was also fascinated by the picture of the ascetic, dark-haired fainne-wearing priestly figure which hung prominently on the walls of the parlour.

On inquiring whom this priest was, my mother informed me that he was Columban missionary, Fr Tim Leonard, my father’s first cousin who was born in Ballycraheen. She further told me that he was a martyr who suffered a cruel death at the hands of the Red Communists in China in 1929; she proudly forecast that one day he would be raised to sainthood.

Thirty-six-year-old Fr Timothy Peter Leonard, the first martyr of the Society of St Columban, was an iconic figure in our house. He was a great enthusiast of the revival of the Irish language and always wore the fainne on his lapel and preferred to be called Tadhg, the Irish for Timothy. In his letters home to his siblings he addressed them ‘as Gaeilge’ and signed off as ‘Tadgh’.

My deeply religious mother, who had great devotion to him, would always advise me to pray to him. She was anxious that I would follow in his footsteps and become a priest but alas it was not to be.

It was a sad day for the Leonard family at Ballycraheen when news of Fr Timothy’s death arrived, as well as for the parish of Monaleen and for the Columban Fathers. His brothers Richard, Fr Joe and his sisters Jane and Molly, were deeply shocked at the news.

But there was an unusual and joyful note from Sydney, Australia where another brother, scriptural scholar Dr William Leonard, wrote in a cable to his mother Mary, “Congratulations! You have become the mother of a martyr.” This message brought Mary Leonard some consolation. 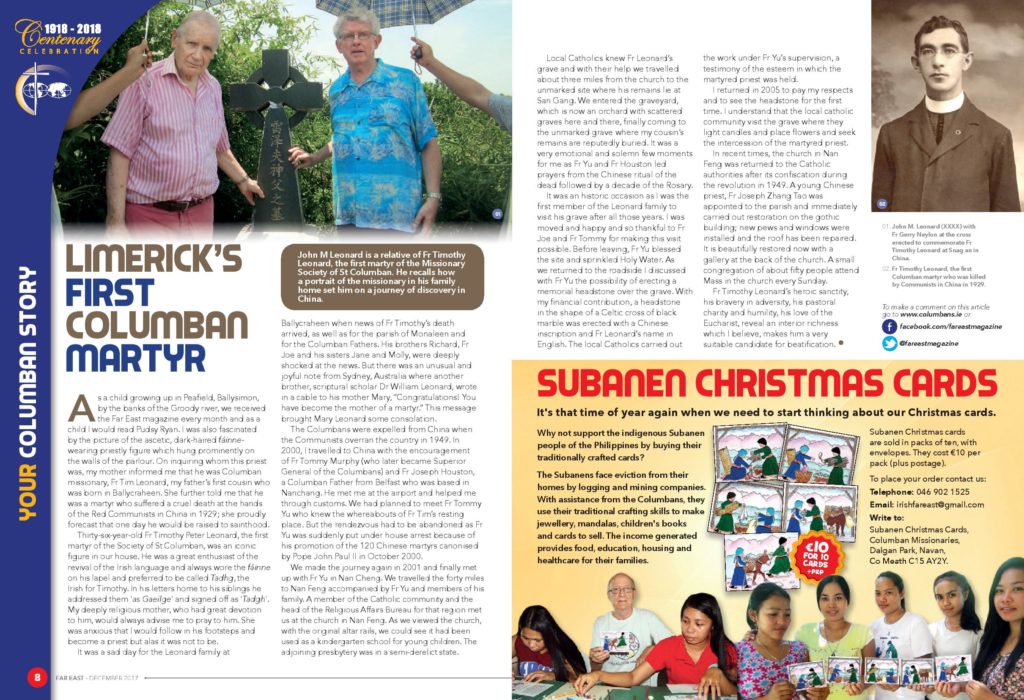 The Columbans were expelled from China when the Communists overran the country in 1949. In 2000, I travelled to China with the encouragement of Fr Tommy Murphy (who later became Superior General of the Columbans) and Fr Joseph Houston, a Columban Father from Belfast who was based in Nanchang.

He met me at the airport and helped me through customs. We had planned to meet Fr Tommy Yu who knew the whereabouts of Fr Tim’s resting place. But the rendezvous had to be abandoned as Fr Yu was suddenly put under house arrest because of his promotion of the 120 Chinese martyrs canonised by Pope John Paul II in October 2000.

We made the journey again in 2001 and finally met up with Fr Yu in Nan Cheng. We travelled the forty miles to Nan Feng accompanied by Fr Yu and members of his family. A member of the Catholic community and the head of the Religious Affairs Bureau for that region met us at the church in Nan Feng. 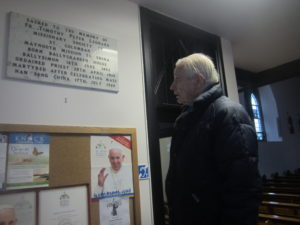 As we viewed the church, with the original altar rails, we could see it had been used as a kindergarten school for young children. The adjoining presbytery was in a semi-derelict state.

Local Catholics knew Fr Leonard’s grave and with their help we travelled about three miles from the church to the unmarked site where his remains lie at San Gang. We entered the graveyard, which is now an orchard with scattered graves here and there, finally coming to the unmarked grave where my cousin’s remains are reputedly buried.

It was a very emotional and solemn few moments for me as Fr Yu and Fr Houston led prayers from the Chinese ritual of the dead followed by a decade of the Rosary.

It was an historic occasion as I was the first member of the Leonard family to visit his grave after all those years. I was moved and happy and so thankful to Fr Joe and Fr Tommy for making this visit possible. Before leaving, Fr Yu blessed the site and sprinkled Holy Water. As we returned to the roadside I discussed with Fr Yu the possibility of erecting a memorial headstone over the grave.

With my financial contribution, a headstone in the shape of a Celtic cross of black marble was erected with a Chinese inscription and Fr Leonard’s name in English. The local Catholics carried out the work under Fr Yu’s supervision, a testimony of the esteem in which the martyred priest was held. 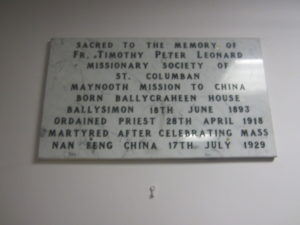 I returned in 2005 to pay my respects and to see the headstone for the first time. I understand that the local catholic community visit the grave where they light candles and place flowers and seek the intercession of the martyred priest.

In recent times, the church in Nan Feng was returned to the Catholic authorities after its confiscation during the revolution in 1949. A young Chinese priest, Fr Joseph Zhang Tao was appointed to the parish and immediately carried out restoration on the gothic building; new pews and windows were installed and the roof has been repaired.

It is beautifully restored now with a gallery at the back of the church. A small congregation of about fifty people attend Mass in the church every Sunday.

Fr Timothy Leonard’s heroic sanctity, his bravery in adversity, his pastoral charity and humility, his love of the Eucharist, reveal an interior richness which I believe, makes him a very suitable candidate for beatification.