Xavier College was established in 1953 as a boys’ school by the Catholic Archdiocese of Suva, writes Fr Pat Colgan, SSC, to provide Christian education, particularly to Indian youth in the western part of Fiji. It was entrusted to the Columban Fathers at the request of Bishop Foley SM.

The latter saw education, particularly of the poor, as key to the possible conversion of the many Hindus, Muslims and even Chinese in Ba to the Catholic faith. Many conversions did in fact occur and all who studied there have enormous respect for the Columbans, Marist Sisters and Christianity in general.

The first lesson which started at 8am on 12 February 1953 was Latin, for a duration of 40 minutes, followed by the second class which was grass-cutting and then more grass-cutting!

Particularly loved by the students was Fr Vincent Batchelor of Cohuna, Victoria, who was a teacher for 10 years and chaplain for almost 20, after the departure of the Columbans.

In 1970 co-education was introduced and in December 1987, the Montfort Brothers of St Gabriel took charge of the College.

Now there is a roll of almost 900. The College has excelled in national quizzes and also on the sports field – athletics, table tennis, rugby and soccer.

Xavier had provision for boarders for many years, up to about 1980, when the dormitory was turned into a computer room.

Boarders came from places like Navala, Vatukoula, Navunibitu, Nadi, Lautoka (before the establishment of St Thomas’ Secondary School). Among the students were a number of future priests: Frs Veremo Dovarua, Lewis Henry SM, Veremo Nayacalevu CM, Jope Senikura SM, and Arthur Leger, SJ, as well as others who work in the local business community, overseas judiciaries, and even at NASA! 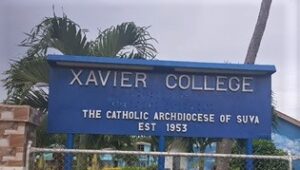 A great friend of the boarders was Ishaq Ali, the man who cooked their meals and made sure he gave them the kind of food they liked – plenty of casava – which was grown in the College garden.

He also cooked for the priests and provided morning tea for the teaching staff of the college. In his spare time, he milked the cows morning and evening and did the shopping. According to Fr Dan Ahern, he was the most generous, selfless person he has ever known. “He wasn’t a religious man; he used to say he left that to his wife!”

A new milestone was reached on 1st January 2021 when management of the school passed from the hands of the St Gabriel Brothers to that the Archdiocese of Suva, represented by the Catholic Parish of Christ the King, Ba – presently administered by the Columbans.

So, in a sense, it is a return to the original inspiration of Bishop Foley.

Columban Fr Pat Colgan has appointed Mrs Makarita (Margie) Muller to be Executive (day to day) Manager of the College.

They ask for your prayers as the parish steers the College in these challenging times – pandemic, climatic and economic- to a future open to the new, as well as faithful to its original motto: United in God.